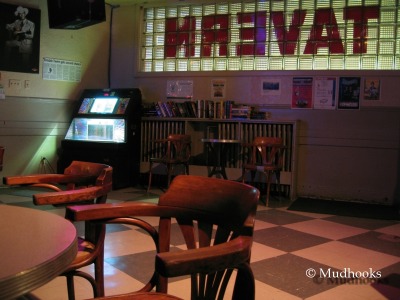 There are only a few traditional taverns left in Ottawa. The Elmdale House Tavern is one of them. The building itself dates to 1909 but the Elmdale House Tavern opened in 1934. Originally, it probably had a single barroom but new (and backward) liquor laws which were enacted in 1937 required all Ontario Taverns to have "two separate and distinct beverage rooms – one for men only, and the other solely for women, except where attended by bona fide escorts" (The Globe March 29, 1937, "Liquor Board to Curb Mixed Drinking in Ontario Hotels, New Rules to Require Two Rooms"). Women were forbidden to cross into the "men only" section. And even if they owned the tavern, women were not permitted to SERVE in the men only sections! By 1944, after much back and forth about the right of women to serve in such establishments, the LCBO (Liquor Control Board of Ontario) stipulated that "authority holders desiring this privilege [to have female servers working within the Ladies and Escorts room] must make application to the Board as well as submit a medical certificate covering the proposed employee and indicating that she is free from disease"!!! Most provinces had the same laws.

In the 1970s, I can still recall being required to remain in the "Ladies and Escorts" side of all the taverns that my friends and I went to. By then, women were permitted to go into taverns unattended, in the company of female friends, or in mixed groups... but we were still not permitted in the "men only" room. It wasn't until the late 70s when the law permitted women to go into the "men's" side. I can still recall the time when we were looking for a friend and my male friend took me through the "Men only" room of the famed Château Lafayette (older than the city of Ottawa and one of Ottawa's oldest institutions!). Despite the fact that women were by then permitted in, it was still a male only bastion and I can recall the glares and stares I got from the denizens.

Some taverns retained the "no women allowed" attitude well into the 1980s. My former father-in-law recalls when The Bank Hotel Tavern in Quebec being the target of a protest by women who wanted the right to have lunch and a beer in the still male-only tavern. They came into the bar and were physically ejected onto the street by the male patrons! It took a court challenge to finally change the unwritten rule of "men only". It is not long ago that you weren't allowed to pick up your drinks and carry them to another table. If you wanted to move to another table, your waiter had to take your drinks over for you... 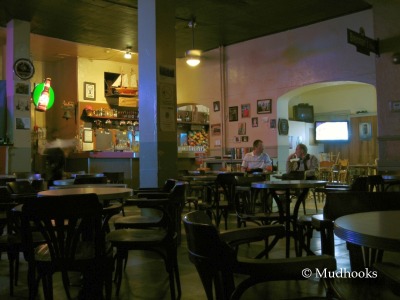 The Elmdale House Tavern was purchased, updated, and reopened in 2007 and has become one of the most popular music venues in the city. It still retains its traditional tavern atmosphere, especially during the daytime, but it rocks at night! The owners have made a point of supporting local bands and music artists as well as some pretty big names from across Canada and the USA, especially Rockabilly, alt-Country, Rock and Roll, and alternative bands.

The Elmdale often feels like you've travelled backwards in time, despite the few changes.