Just when you thought it was safe to go back in the Post, after all that competing...


I come up with this.

Read on, and repeat after me: We are interesting, we are innovative, we are unusual...


We are not anything that starts with a Q.

What are we at h2g2? Besides brilliant, I mean. And modest, I forgot to mention modest.

We're innovative, ahead-of-the-curve, behind-the-eight-ball, insightful, lateral thinkers. We're original, offbeat, unconventional (it says so on the label) writers about life, the universe, and everything. We're somewhere east of the sun and west of the moon...we're maybe...

To explain, I'll have to tell you a story, but I was going to, anyway. You know me.

Back a while, when I was at the tender age of 40, I had occasion to go to my optometrist.

'Doctor,' I complained. 'I've always been short-sighted. I have a rotten astigmatism. Due to pseudopapilledema, I have blind spots the size of lorry wheels. But now, as if that weren't enough, I can't see close up. What gives?'

'You're getting old, Dmitri,' he said gently. 'It's called presbyopia, or Arms Too Short Syndrome. You just need some more glasses.' It turns out I needed more than that: when the competent but maddeningly young eye specialist measured my vision, he got all hmm-y. I hate it when they do that. It's almost as bad as when my Indian dentist looks in my mouth and says, 'Aieee...'

'Can you see this?' he asked of a letter on the same row as the other ones I'd been reading. 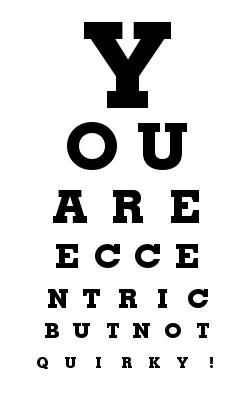 'Hmm...' (Stop that.) 'I think you need to see an ophthalmologist. Here, go tell this fellow you need a Fields Test.'

'This fellow' turned out to be a white-haired specialist whose last name was the same as a major river in Ireland, but who was far less pleasant to sit near. Even older than me, this gent was as mad as a hatter. He took an instant dislike to myself, and yelled at me all through the process of testing my Fields. This procedure involves sitting in a darkened room staring at a dot on a white wall, and clicking like mad on the little remote thingy whenever a light flashes somewhere. It makes a map of your blind spots, you see...

Mine looked like a map of the Galaxy. No lie. 'This is the problem,' my regular doctor explained. 'You have optical nerve drusen, crystals on your optic nerve that cause tiny blind spots. You're looking around them all the time.'

'In fact, you are eccentrically fixating.'

I looked at the optometrist solemnly. 'I have often been accused of it.'

Almost twenty years later, I'm doing better. In spite of the warning that 'if it doesn't level off, you'll get tunnel vision,' I've survived. Since the eye surgery with implants (and more Fields Tests), I can even see without glasses unless I'm trying to read. But I still eccentrically fixate all over the place.

Like van Gogh, who probably really saw the stars like that. I mean, I do, all the time. Anybody out there besides me ever looked at Venus through cataracts? I asked somebody about the UFO, I really did... Now I can see Venus. But I still see all the spiral light trails from the stars...they're pink, even on a black night, even when I can't see the stars themselves...

See what I mean?

If we explore the out-of-the-way, the almost-not-there, the unusual, the unheard-of...we're eccentrically fixating.

If we dream of things that never were, and ask why not...well, we're just quoting Robert Kennedy, but hey, that's cool.