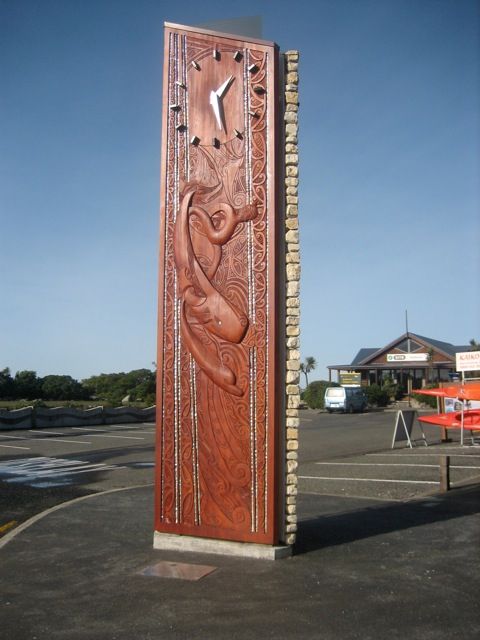 Kaikoura is a town about halfway between Christchurch and Picton, on the South Island of New Zealand and it has a new (February 2011) Town Clock.

Its future is as yet undetermined, of course, but is represented by a very plain frosted glass sheet, one of the three pillars of the clock.

The frosted glass pillar holds no pattern as it represents a clean slate and a story which has not yet been written.

While the past and present pillars stand at equal heights, the future pillar extends above as a symbol of growth for Kaikoura.

Its present is represented by an unexceptional wall of brick sized limestone blocks set in mortar:

Constructed from local limestone, the stone pillar represents the strength of the town at present and references Kaikoura's spectacular tectonic landscape.

In the day of the Pakeha (New Zealander of European descent), Kaikoura's living was, until not so long ago gained almost wholly from whaling. More recently, a tourist whale- and dolphin- watching industry contributes significantly.

The town is largely owned and run by Maori, which brings us nicely to the more interesting of the three pillars:

Kaikoura's past is represented by a carved wood panel.

The timber pillar looks back in history, drawing materiality from the traditional structures of the town; the carving depicts the story of Paikea, ancestor of the local Maori, who came to New Zealand on the back of Tohora.

The carving emphasises the relationship between human life and the unique marine environment of the Kaikoura District.

The carved panel is some three inches (75 mm) thick, made up of laminated pieces of similar width and the decoration is inlaid pieces of paua shell – the nacre or mother-of-pearl of the ormer (abalone).

The wood appears to be Rimu (which is still available if you have good reason, good contacts – and a permit).

That, then, is the Past panel ...and what's more, it's impressive. 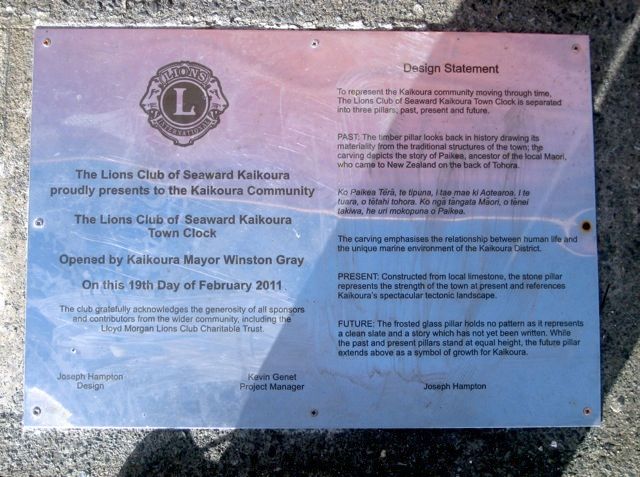 Click here to vote for this entry in Category I