Over the 3rd weekend in June various Hootoo-ers head off to north Cornwall for a meet up. They are camping in the rather pleasant Carlyon Bay site. Activities include barbecues, The Eden Project, the beach, and drinks. Your narrator is
Swiv, who is involved for 24 hours between Saturday and Sunday lunchtimes. 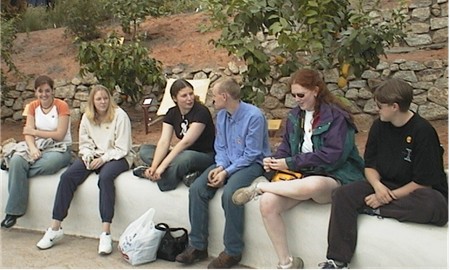 Notice in the h2g2 Post, in April announcing the meet.

A week and a half ago, Swiv enters her new-found workplace.

Swiv: 'Um, there’s a few days this summer when I won’t be able to work - I have other plans.'

Boss: 'OK, well just write them down for us, and that’ll be fine.' - On seeing the list... 'Do you have to miss this two Saturdays in a row?'

Swiv: 'Um yes, well I have Wimbledon tickets for one of them. -
pointing.

Swiv has managed to appropriate her father's car for the weekend, however this means
that she can only attend a small portion of the meet up, entirely missing out on pitching
tents in the rain on the Friday night. Instead she arrives at the Eden Project just before
2pm on Saturday afternoon, in easily identifiable clothing desperately texting Pegasus.

Swiv mooches around by a horse sculpted from random bits of wood, keeping an eagle eye
out for people who look like they might be in a group. Eventually some appear, and identify
the red hoodie. Greetings are swapped. Children race off for Cornish ice cream.

Movement is made gradually into the ticket office where money/pre-bought tickets are
exchanged for Eden Project stickers, and then out to admire the project. The area
formerly known as the planet Magrethea (or a St Austell Clay Pit) is cunningly positioned,
it is nigh on impossible to see the Project until money has been handed over. From first
glimpse however, it is clear that it is money well spent. All of it, in fact. Not just the
visitors, but all that required to create the two giant biomes and intriguing landscape
garden (for want of a better word). Pop-up of Tony kicking himself. Hard.
As the group tour the project Swiv begins to find her feet in the meet environment.
Everyone stops to look at the sculpture about Dionysus in the vineyard section of the
Temperate biome. A small talk by an official Eden guide is listened too. Apparently
plastic 'corks' for wine bottles were created when there was an infection of cork trees in
the major cork producing region of the Mediterranean. Now that infection has been
removed, plastic stoppers are no longer required, and may damage the profitability - and
hence existence - of the cork trees. So to be environmentally friendly, the group thinks
perhaps it should drink plenty of wine out of corked bottles.

It then appears as if Tink’s body is unable to adjust to varying temperatures. It may
also be that the group was stood first by an open door, and then in the tropical biome.
All gaze somewhat bemusedly at the prow of the ship placed at the entrance to the tropical
biome, some worry that the spider on it might not be fake.

Swiv, Beaver and Beaver’s friend get dampened by the waterfall in the biome.
'Sus takes many photos. So many in fact, that 'many' is not an adequate description.
A Hootoo-er, circa 5:30pm, as the project begins to close: 'Where's 'Sus?'
One of 'Sus' kids: 'She’s probably seen another plant she liked and stopped to take 50
photos of it.'

By 6pm the group have all seen the sights - or thought that perhaps it might be time to
leave - and collected outside the gift shop. Toccata and Thinker are armed with fancy,
Eden advertising (in a discreet way) clothes. Others have plants, and fudge. Swiv offers a
lift to those intrepid beings who had hiked from the campsite to Eden. C Hawke, Munchkin
and Toccata scramble into the car, and direct her confidently to the right place.

Back at the campsite barbecues are wheeled out, picnic tables pulled together and
people start to wonder what food they have. Swiv discovers that her pork bellies don’t
feature a large amount of pork (possibly less than a square inch) and since she doesn’t fancy
just eating pork crackling for tea, ditches that idea, and has sausages donated by Munchkin
and Toccata (who are eating steak sandwiches). It turns into a communal picnic. Later in
the evening chocolate mousses, bananas and chocolate and clotted cream appear, alongside a
few bottle. Or perhaps a few dozen bottles. The environmentally friendly side of the
group makes itself known as a bottle of wine is opened. Some nearly empty bottles are
emptied. Some nearly full bottles are empty. A vicious cocktail is mixed - containing,
amongst other things, pear schnapps and banana smoothie. Cocktail swords are produced -
fencing and mild arson ensue (it is discovered to be fun to melt the swords in the scented
candle keeping the bugs away). Very gradually people begin to drift off to bed - Swiv goes
at around 2am, unsure of who she leaves at the table.

Movement is heard at around 7:30 the next morning. Swiv appears about an hour later,
and some forms of breakfast begin occurring a while afterwards. Tink forgets that she was
planning on eating cream for breakfast. Swiv can’t be bothered to get her stove out and
cook eggs, so eats chocolate biscuits and marshmallows. Gradually plans are made for
movement towards the beach. Packing occurs first - Swiv, Peregrin, Tink, Munchkin,
Toccata, Beaver and Beaver’s friend are all leaving. Munchkin drives a car for the first
time in five years, everyone watches intently. Carlyon Bay is never going to win any clean
beach awards. Not particularly ugly, apart from the musty yellow nightclub next to it, and
rubbish littering the sections of the beach. The sand isn’t quite sand, but pebbly. The
water is gorgeous: clean, clear and ever so slightly more than chilly. Swiv and Beaver try
skimming stones. The majority of the group decide to head down the beach a little to see if
it’s cleaner, but Munchkin and Toccata decide to begin their long drive home before it gets
to late, and Swiv realises she should take the car back to her father in case the hospital
need him to drive somewhere. So there are waves, and mentions of further meets, and off
Swiv heads - looking forward to the next occasion.