The plan was simple. We'd meet at the RE, have a couple of beers, move on to the Regatta (a short stroll away) and then continue on to the remaining pubs on the list in time to finish up with dinner in the Valley.

It was a beautiful autumn-in-Brisbane day, clear blue sky and a freshness in the air that hinted of the winter to come. I'd brought along a couple of friends, one a new arrival from the UK, who I'd promised to introduce to good Brisbane pubs. We got there before the others, and decided there was no point in waiting before purchasing an ale or two. With my towel draped around my neck, I was waiting at the bar in the beer garden of the RE for the first jug, when a bearded, hesitant-looking fellow approached. 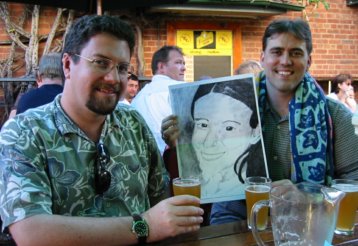 The photo depicts Wowbagger offering Amy a glass of Cooper's finest,
while the gentleman behind us is perhaps concerned about the fashionable elegance of my towel...

Thankful that I wasn't the subject of a pick-up attempt, I replied in the affirmative and introduced myself to that famous man himself - Wowbagger. We soon got into the rythm of jug-purchasing, Coopers sparkling ale being the flavour of the afternoon, and consumed several while awaiting the arrival of TF. Amy, the paper lady, had her spot at the table as well, but seemed reluctant to join in on the beer-drinking.

We waved at the cameras at around 3pm, on the off-chance that someone might be online and watching.

More beers, and still no TF.

We decided to move on. The Regatta hotel was next on the list, and securing a street-side table ensured a good view of the river and passers-by. The Regatta's new glass-wall urinal (you have to see it to believe it) was the subject of some discussion, and several more beers were consumed, this time the boutique beer brewed for the Regatta.