The following secret message was just recently intercepted and decrypted by one of our deep space probes. It reads:

''To the head quarters of The Intergalactic Surveillance Forces.
I recently (during the holidays that some people on Earth call 'Easter') succeeded in secretly attending a so-called meet-up held by an organisation called 'The Nordic Researchers Club', which seems to be a part of a worldwide conspiracy called h2g2.'


This is my report. 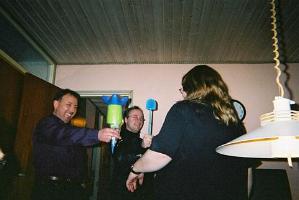 The meet took place in the town called Esbjerg, Denmark. It is an
important fishing port and the centre for all Danish offshore oil and gas drilling in The North Sea.

The attendants were as follows (in order of appearance - please look into their private files for more details):

Previous to attending the meet I had cunningly left for a secret location, where I went under-cover for a few days, disguised and working as an ordinary, local cow-freak. From there I managed to travel to the meet disguised as an ordinary Danish citizen and I believe that no-one recognized me on the way.

The attendants arrived at very different times (very suspicious). Some came by train, some by car and one even hitchhiked a lot of the way from as far as Estonia! (highly suspicious!)

Upon arrival all these carbon-based lifeforms started to eat a lot of food and drink a lot of different beverages (of which many had one thing in common called alcohol). Some even started to smoke tobacco. Two of them shared quite a few boxes of *menthol* cigarettes between them, would you believe it? (highly suspicious!)

As a result of this massive consumption of food and beverages people started to talk a lot and giggle a lot. This kept on until it was time to go to sleep-mode. Four slept in the flat where the meet was held whilst I and the remaining three were accompanied to our quarters in the basement of a nearby block. Accomodation was second to none, but the walls were painted blood-red (coincidence? I think not!) and covered with pictures of crying children...

To my surprise I found a picture of a tallship with four masts on my wall. What where the chances? I find this suspicious beyond belief!

Morning started with breakfast, which was good. No, better than good. There even was a bottle of Gammel Dansk. Okay, make that 'perfect'! 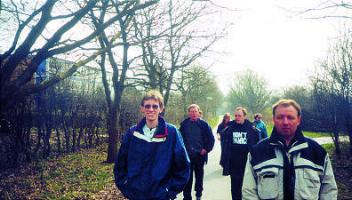 Now was the time to go dike-spotting and ocean-spotting. Well, once you have seen one ocean you have seen them all, but we found a ship in the harbour with the name 'Douglas' on it. And the bus that took us to the harbour and back had room for 42 passengers... There were also other highly suspicious 'coincidences' - but I will save the details about those for later.

We had barely returned to the meet before it was time to eat, drink and smoke again! This inevitably led to more talking and giggling and even laughing. And then we were suddenly also singing strange songs in strange languages and playing different games, which led to more giggling and laughing.

At this time I guess someone must have recognized me or at least have suspected me for not being who I said I was, because shortly after I was sedated and don't remember anything else from the meet...

Naturally I left as soon as I could the next day.

I think it is of the utmost importance that we keep a close
eye on h2g2 in general and The Nordic Researchers Club in particular. I rate this organisation 'almost - but not entirely - harmless'.

This is what I can tell you about the individual attendants:

Dax is an excellent caterer, speaks Danish, English and German fluently and even sings Klingon!!! In fact she may very well be a Klingon, for all I know!

Engländer lives in Germany, yet claims to be English, is fond of waving small paper-Union Jacks at railway stations and speaks both German and English fluently. Very suspicious. He is also one of the menthol-smokers

and he brought some very tasty homebrew. He may very well be one of the persons that sedated me!

Hati. Another one of those menthol-smokers! She is the one who hitchhiked all the way from Estonia by car, bus, truck, ferry and train. Highly suspicious, even if she seems to be a very sweet and charming young lady.

Bumblebee claims she is from Bergen, Norway, and even brought a smoked mackerel all the way by plane and train to prove it! Highly suspicious! Had no problems finding two of the others on the train from København to Esbjerg even if she claimed she had never previously met any of them before...

Ottox was one of the guys that Bumblebee met on the train (the other was Hati). Ottox seems to be very famous in the realm of h2g2. He is not a very wordy person, but you can almost feel how much he listens to other peoples' talk. He was the only one attending the meet that was fond of Gammel Dansk (apart from Bumblebee, Tube and yours truly, of course), which makes him seem almost human. Nevertheless: I think we should be really careful with this guy!

Bossel works with computer-based communication (mobile phoning) and is probably responsible for a lot of bad connections, communication break-downs and young people spending too much money on SMS. He could prove very valuable for our organisation! Drives a blue goo car with DNA and the numer 42 (twice!) on his number plate. He brought the best wheat beer I have ever tasted and like Engländer he is heavily suspected for having sedated yours truely!

Tube arrived with Bossel and helped him carry the wheat beer. Need I say more? He may very well be responsible for organizing the so-called chaos-days in the German town of Hannover (known to the rest of the planet as Hangover). Has a strange, but very well evolved sense of humor!

KimotoCat arrived almost a day later than everybody else. This in itself is, of course, highly suspicious, but it also gave me very little time to study this feline creature. She speaks english very well. In fact one could easily mistake her for being a British person! Highly suspicious! She works in a place called 'school' as something she calls 'teacher'. From the sound of it she probably brainwashes a lot of young carbon-based lifeforms in the north of Jutland...