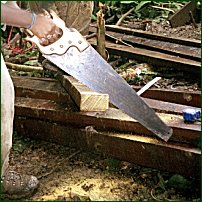 A Fun Day. Well, that's what it was billed as.

It's been running, on one day a year, for several years; at a different club each year (in the bottom half of New Zealand's South Island), and it goes something like this:

Clubs are invited to participate in a challenge, in the home town of the host club, by sending teams of turners to fulfil a task according to rules laid out by the host club.

The public are also invited and the day is used to advertise and to attract new members, for the host club and for woodcraft in general, as well as to show off to each other.

Each participating club is given a table which they decorate, and on which they place pieces of work made by the team members, which they consider special.

Start at 06:45 - except it was five minutes later 'cos of the car being iced up'. Then 2 hours 20 minutes to the church hall where the event was being held, and some uncertainty about parking. After unloading tools, showpieces and lunchboxes, we were told about unmetered parking places further up the road. It would have been nice to have had more information, earlier - especially as the metered spaces weren't active at the weekend (which we suspected but didn't know for sure).

Tea, coffee and snackies were provided by the hosts, on arrival, and were available through the day.

We were allocated our home table and laid out our club banner and showpieces, judiciously selected which ones not to show, and positioned the remainder to best advantage.

Our team consisted of:

a woodturning instructor, a man who makes part of his living from turning, two experienced turners, me (some experience, less expertise) and a relative newbie.

(One of our team was a woman (we have three female members), but only one other woman participated.)

The wood blanks were provided:

Luckily, the bowl and lid blanks were pre-drilled with a chuck recess - we'd all practised starting with plain blanks, taking up time making our own recesses or spigots.

Our first turner set up his tools and his courage:

New lid completed? How? We'd moved along smartly from the beginning, but surely lost too much time?

In fact, as it turned (sic) out, we'd finished far too early - and could have made rather better quality pieces.

Half time arrived and the stop was called at the 90 minute mark, which we'd thought was to be full time.

It was at this point that things went seriously awry. The Master of ceremonies asked – nay, demanded – that all the finished pieces be removed to a table some distance from the lathes. Oh, Mishap, Oh Woe!

Anyway, the second half went to completion without further disaster.

Task done. Could have been worse.

To fill in more of the day, for the afternoon, a seriously competent turner had been engaged to demonstrate how to undertake a particularly difficult task - in this case turning a decorative spindle having impossibly thin sections.

Lunch break - half an hour, except for one of us from each club, who were tasked with judging the Home Tables for overall Wow! Factor (their words), Layout, Balance and Design of the individual pieces.

Then selecting one from each table, judging Wow! Factor (repeating themselves...) Design and Finish.

Then from those five, the 'Best in Show', by refining the same criteria.

Oh boy, were there some exhibits! Almost incredible stuff on show, things to drool over, to envy, to aspire to...

By this time the competition pieces had been judged too, 1st, 2nd, 3rd. The prizes, the raffle prizes - and the day was over.

Overall, 'twas a very enjoyable day. Next years' is something to look forward to.

Dear reader, we will not tire you with boring detail of the winners.