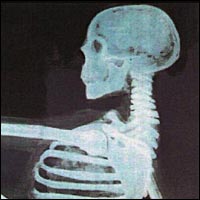 I could have been down at heart due to my problem, but I took and still do take life head on, because being down is negative and I don't do negative.

The Prof and his Scoliosis

Right, here we go, a serious one this time LOL!. It's a little autobiography about my curvature of the spine.

I was two years old when they first (doctors, not vets) found out about my curvature of the spine, and from the age of four years until I was ten years old, I had to wear a metal and leather "jacket", which consisted of a roughly 5-inch-wide large leather sort of belt round my waist, two metal bars at the front and two at the back, up to a chin piece that went round my neck, and a vertical piece behind my head. I was only allowed to have it removed for bathing. Whether I wore a vest inside of it or not, because of the rubbing round my waist I got terrible open sores on my hips. At that period of time, my junior school was next to my gran's house, so I lived there Monday to Friday for school and Saturday and Sunday I lived at "home" with my mam and dad, which is not far from where I live now, on the other side of the town.

My gran used to have to dab around my waist area with a wet cloth,
slowly, to free the leather "belt", as it always "attached" itself to me because of the blood & sores, and congealing & scabbing, painful at all times of course. The first jacket had the chin piece round my lower jaw and it eventually threw all my teeth out of alignment. So as much as I had to keep returning to hospital (in Leeds 14 miles away) some times three times per week and in the days when my mam had to leave the rent to pay the bus fares, I also had to regularly visit the dental clinic there as well. After a while, they moved the chin piece to below my chin and they found that within six months, my teeth had straightened up — this now benefited every other child who had to wear one.

During the 1950s (born in 1950, not dug up) they had no medical knowledge about curvature of the spine in Britain, apparently my mam says they put me in leg irons. A consultant who had been in America for a few years studying about curvatures asked if he could take me on as his case (NO, not nut!), at which my mam and dad said why not, no one else can do anything. So I actually became the guinea pig for the country. Anything new was tried on me, if it worked, then it was okay for others like me. If it failed it was back to the drawing board.

Each time I went to the hospital, nuts and bolts on the uprights were Loosened and the bars raised slightly. The theory being that it would stretch the spine straight. Because of the bolts and nuts etc., anything I wore soon got holes rubbed through it, so "posh" clothes, like shirts and trousers were out of the question, the costs involved were too expensive, so it was T-shirts and denim jeans(which I haven't changed from to this day).

When I was ten, a new operation came out and an 8-inch length of bone was grafted onto the curve, with the theory that as I grew and the graft grew, the spine would straighten. This caused me to have nearly a full year off school and the deputy headmistress came over twice a week to give me lessons in bed as such. So with that operation, The "jacket" came off for good... What a relief!

At the age of 17 years, another operation hit the scene. This involved being stretched on what could technically be called a "modern-day" medieval rack! The vertebra became lined up and a stainless steel rod was inserted in the spine, the bottom half of the vertebra fused together. I asked if it would take some of the "lump" off, as it was not a needed operation as such (my mam says it was, but I know different) and when the specialist said it should take some away, I said "Okay. Let's go for it!"

I went in the hospital at 5ft 1ins and came out at 5ft 3ins. I was covered in plaster of Paris from the groin to under my arms for 14 weeks and was not allowed to sit up, or get up. So there I was 14 weeks laid flat, and then basically had to learn to walk again, as my muscles had forgotten what to do. But I felt like a giant when I was able to walk into the house and passed the sideboard!

The rod was supposed to be left in for two years for everything to set. I asked the consultant about taking it out when the time was up, he said that it was a 10-minute job, but could I afford to have six weeks off work to recover? I said no!

He then asked, "Do you know it's there?

I replied, "Yes, in one sense, but no in another."

He then thumped me in the kidney area and said; "Did you feel it?" (meaning the rod) to which I had to say "No."

He said; "Right then! It's no detriment leaving it in and it's not worth six weeks off work!!

And to this day, it's still inside me (I'm worth more as scrap and daren't go out in a thunderstorm! I'm not paid to be a lightning conductor!).

Had it not been for the consultant, I would have been bent over at about 90% and, chances are, wheelchair bound for life. With that load of baggage to carry about, I got all the insults and jibes under the sun at school and humour was my only shield, but then over the years it became me and in 1970/71 the me as I am now really emerged. 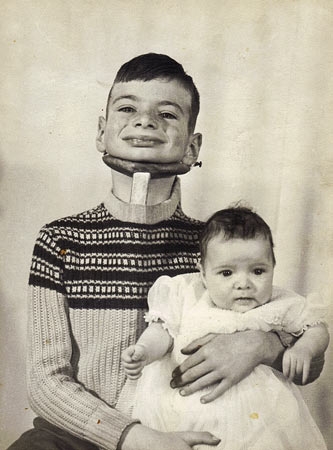 I was nine years old when my sister was born, so I'd be nearly ten when this photo was taken. It is the only one of me wearing that "jacket" in existence. When the jacket was removed permanently, I made my mam destroy all the photos of me in it, as I didn't want any memory/record of wearing the thing! It was only three years ago (2006), she brought this one out of hiding and made me promise NOT to destroy it - I have never, ever broken a promise in my life, and have no intention of ever doing so, even though I still want to burn it!

As some of you might have read my P/S, you'll see I have a daft persona, this is because I was brought up with statement "That there's always someone worse off than you". I have seen this through life, therefore I have nothing to moan about and will never allow myself to be in a negative attitude on anything whatsoever.

And that's about me in a nutshell.