Xi'an – Peace in the West

We are met by the rather school-marmly local guide Lucy, who turns out to have a great sense of humour, and enjoys teaching us some simple Chinese writing, including how to recognise the symbols for China itself. Xi'an, formerly called Chang'an, was the start of the Silk Road, and was an ancient Imperial capital (between 1,000 BC and 1,000 AD), a period which included the Tang dynasty, the golden age of Chinese history (680 BC – 807 AD). With 7m inhabitants it is the 10th largest city in China (Chongqing with 32m is the largest). When we arrive, it is 38 degrees, but hot and dry, so not as uncomfortably humid as the southern cities. Also, being further north, there is a greater contrast in temperatures between day and night. The region produces a lot of fruits: pomegranates, peaches, walnuts and dates, but no rice. So the food of this area is based on noodles and dumplings. 'Big noodles' is a local speciality dish —one noodle is sufficient for all but the greediest of schoolboys!

The city wall dates back to 1370, and is well preserved and very impressive. It is 12 metres high and 14 km long, and wide enough for several horse drawn carriages. After dinner we go on a night tour, incorporating a fountain show, followed by local people dancing a kind of line dance (we join in when it resembles the familiar conga), and a night market, where I buy some cheap souvenirs for my children, and improve my haggling skills. My tactic is to decide in advance what I'm prepared to pay for something, say a tenner for a T shirt, and to start my bid at half that (say 40 or 50 Yuan). I seem to end up with many things agreed at 88 Yuan, since 8 is such a lucky number. I am not tempted by the interesting looking foodstuffs for sale, which include goats feet. 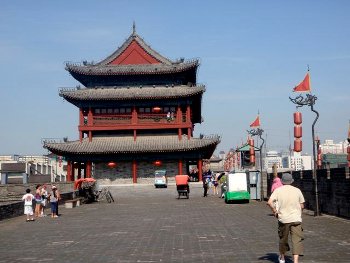 Our lovely hotel has a swimming pool, so I manage 10 lengths before breakfast. The table is laid with a knife and fork, and I find them really awkward to use— my elbows seemed to be sticking out all over the place! We have slightly squiffy tummies, so take some Immodium as a precaution before visiting the Big Goose pagoda. I buy a plastic Buddha for my son, to help him be a good student at University. Lunch is at an old Russian style hotel, and includes the infamous big noodle. I manage to video the noodle maker, although he jokingly asks for payment.

Off to see the warriors, Dai and I are decidedly under the weather and spend most of the hot afternoon in the cool tea house, where some ginseng oolong eases my tum. The Terracotta Army was only discovered during a well-digging operation in 1974, when three rectangular vaults full of individually carved soldiers, kneeling archers and horsemen were revealed. The operation involved in identifying, classifying and recording them all is a feat of mind-blowing proportion, and reveals much about the Emperor Qin Shi Huang, whose tomb it was. Ascending to the throne in 246 BC, he was the first to unite the quarrelling Eastern states, he introduced much standardisation, and began work on the Great Wall, but became known as a tyrant. 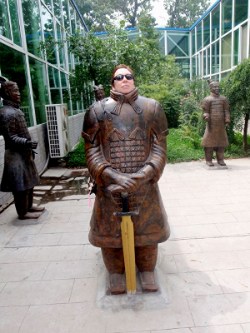 In the evening, it is a special dinner show spectacular, which sadly many of us are not in the greatest of form to enjoy. But there is a surprise birthday cake for Marjorie and Tony, and the show itself is beautiful, with some lovely costumes and dancing, and a famous man doing bird impressions. Loudly. The traffic in Xi'an is the worst I have seen: no-one gives way (not sure if this is to do with the Chinese not losing face thing), and junctions are frequently gridlocked. There seems to be one giant game of chicken going on, and the highway code appears to be he who honks the loudest has right of way. There is a subway construction under way at the minute, and the roadworks certainly don't help the traffic.