I'd never even heard of this city, but it was a capital of Imperial China during the Song Dynasty, and Marco Polo described it as one of the most beautiful cities in the world. It is built around a large body of water, West Lake, and today is a sort of holiday resort for the Chinese. Oh, and a mere 8 million people live here. Local guide Jamie joins us and she tells us about the Last 10 Minutes Project of rental bicycles, which allows more people to use public transport in combination with bikes to make their daily commute. This scheme was introduced on Mayday last year: for residents the first hour is free, after which it costs 1 Yuan per hour. The scheme is also now available to visitors. 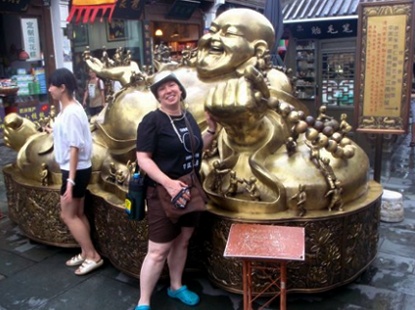 We visit the Dragon Well tea plantation, which is very pleasant, but too dear at their prices. I'm pretty sure I can pick up Chinese tea at the Oriental supermarket back home, so I'm not on the hunt for any bargains. Dinner is at the Lily hotel, where I first start calling Jamie my little sister. In the evening, we decide to explore the bars across from our hotel along with the young couple Georgia and Mike. We are not impressed and rather intimidated by Soho, our first stop. Dai orders a vodka and a hostess explains loudly into his ear that everything is sold by the bottle, and does he really want to buy a whole bottle of vodka? We instead order three beers, which turn out to cost a fiver each, and three small tumblers are placed in front of us, topped out from one bottle by a set of attendants who stand far too close to us. The music is deafening. So we move next door to 1991, where we are greeted warmly and with not a little curiosity, as the live band ask us to sing along, and I dance on a swivelly chair. The next morning I am nursing a tambourine-induced injury…

We take a tour of the city as Jamie tells us what life is like here in Hangzhou (not helped by some crass questions rudely shouted from the back seat), and we visit an old businessman's house with a very beautiful garden (and a bird in a cage that says Ni Hao!) The tour includes a visit to the museum of Chinese medicine, giving an interesting history of this subject which is still very much alive and well today: in fact the museum houses a working pharmacy, and we watch in fascination as customers collect their packages wrapped in brown paper. 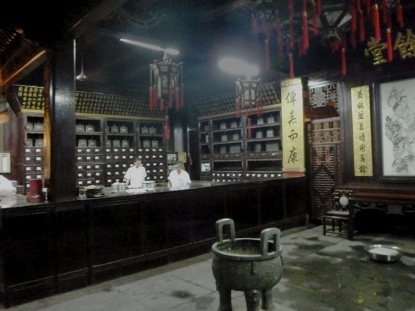 We then take a boat ride on West Lake, Xi Hu, and admire the sheer beauty of the place, which offers wonderful vistas of trees, hills, flowers, and causeways over the lake. There are three large stone pagoda-shaped candle holders, said to control the evil spirits lurking in the depths of the lake, and which are in the illustration on the face of a 1 Yuan note. After lunch we visit a freshwater pearl factory and see how the pearls of different colours are extracted from the huge oysters. The pearls are very pretty, but too dear, and the oysters apparently not good for eating. Next stop is a Lingyin Si, Temple of the Soul's retreat, one of the biggest Buddhist temple complexes in China. There are many stone carved Buddhas hiding in the rocks and caves, and many different layers of temple. But it's too hot to climb all the way to the top. Dai buys a multi-coloured bead thing, to demonstrate how in touch he is with his feminine side.

Back at the hotel we make a start on packing, again. Altogether during this two weeks trip we stay in six different hotels, so packing and unpacking becomes a bit of an art. Before dinner I explore the cavernous mall1 that is opposite our hotel, taking my life in my hands as I cross the road. After dinner we go to the Impression West Lake show, directed by the chap who did the Beijing Olympics opening ceremony. It is set on a stage suspended just below the water level, so that the cast look as though they're walking on water, and in some cases use the water to create a strong visual effect. I'm caught out by the heat: experience has taught me that an evening show by the lake might call for a cardigan, when what is really needed (and indeed is handed out to the audience on entering) is a fan. And an industrial sized tube of insect repellent. Sadly there is no DVD for sale (missed retail opporchancity there surely!), but Dai is able to locate the music later on the interweb. Jamie is an absolute sweetheart, and manages to get me a copy of China Daily with its eclipse report, and also gives me a silk scarf as a present. I've grown very fond of her over these few days, as she tells us local legends and stories, and confides in me about ongoing rows with her boyfriend.

The next morning we are greeted with rain, so heavy it is bouncing off the roads, and I pity the cyclists being drenched in the waves caused by the traffic which hasn't slowed down at all. At the airport, many flights are delayed or cancelled because of the weather, but thankfully our flight to Xi'an is OK. I give Jamie a big hug goodbye.

1And make the obligatory joke about the Great Mall of China.