After the London Meet this year, Malabarista and King Bomba took their travelling roadshow on an unplanned and haphazard tour of Ireland. The first installment deals with their stay in Dublin. 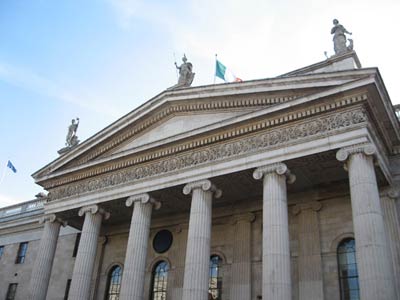 The London Meet came and went, and it just wasn't enough for some Researchers. Having got the bug, Malabarista decided to head west and do some travelling with me. Monday morning arrived, and I duly set out to get the bus to the airport to pick her up. The trip's start was as disorganised as the rest of it was to be: every cash machine in town had decided to go down at once, leaving me to run around trying to find a source of money to pay for the bus.

In the end, I found it, and made my way to Dublin Airport.

As airports go, it's not the worst. Nowhere near as spread out as Heathrow, for instance, but it was still nice to meet up and get out of there. On the bus into Dublin, I was presented with a comic to read. Since it was in Dutch, this was to provide me with untold hours of enjoyment making up my own dialogue to match the pictures. The bus provided enough time for a rundown of the merriment in London, before we got into the city, and made our way to the guesthouse we were staying at. It was about five minutes from the bus station, but we ended up wayyyyy up at the top of the staircase - a precedent which was faithfully followed in every place we stayed after that. We both had thighs like stone by the time we were ready to head home. 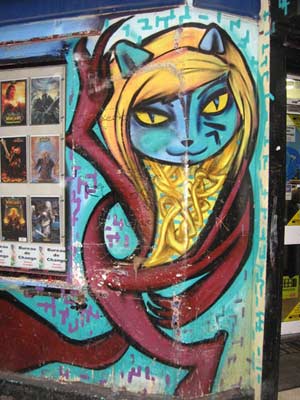 So, first stop was the statue tour. Dublin has all kinds of statues dotted around the place, many of them a stone's throw from where we were staying, so we went and took a look. There are two main branches of statuary: the saint and the patriot. If the head hangs down and the hands are outspread, you've got a saint. If it's a patriot, the gaze is fixed on the horizon and one hand points the way to the future. It's all very visionary-looking. Malabarista developed a slight obsession with monuments of another kind, though. The preponderance of chimneys in the city seemed to be like a red rag to a bull. "What do they need them all for? They're just doing this to annoy me!" She was even more convinced of this when she saw a signpost directing us to a "Chimney Viewing Tower". I decided it was more than my life was worth to force her up it, so we gave it a miss. 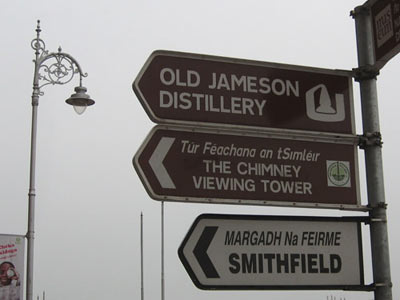 It was a long day, with plenty of travelling going on, so we decided to take it easy. Off we toddled and found a source of food. The man in the guesthouse helpfully directed us to a pub where we could hear a bit of music, which seemed to consist of cliché songs for tourists. Thus was born the "Cliché Tourist Song Bingo". By the end of the holiday a full-house had been scored at least twice! Deciding we needed to escape, we found a different pub. This one had a nice cosy little private booth where we duly set up camp to chat, drink and play table-top sports with a conker. 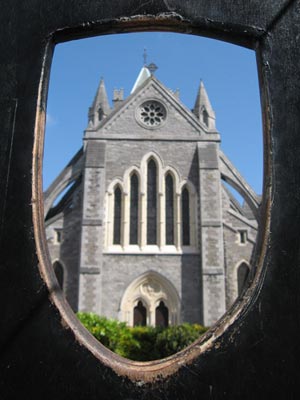 There's more to life than sport, however. Next day we decided to bathe ourselves in a bit of history. We set off for the Dublinia exhibition in Christ Church Cathedral - a display of the history of the Viking settlements in the area. Fairly interesting for what it is, but quite a lot of it is pitched at the school audience - as evidenced by the swarm of French and German school children your intrepid Researchers ended up bouncing around in! 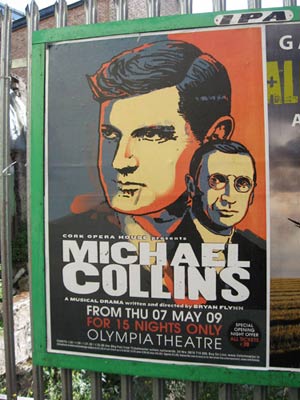 We decided to give "Michael Collins: The Musical" a miss, but The National Museum in Collins Barracks was much bigger and contained a lot more to see than Dublinia - and also the benefit of being free! We took one afternoon to walk around it, but it probably contains enough to repay quite a number of afternoons. There's the story of the 1916 Rebellion, an exhibition about the noted designer and Mal's fellow architect Eileen Grey, a temporary exhibition about the history of duelling, an exhibition of Irish furniture...too much to take it all in. It was nice to see an old glass-case-style natural history collection, too, where you can take your time looking at the things you want to, rather than being shuttled along a conveyor belt of touch-screens, as is often the case.

The second day in Dublin also give the opportunity to catch up with Beatrice, who was in town on business that day. A lunch was hastily arranged, and we had quite a nice meal in Temple Bar. The portions reflected either the chef's views on cuisine or the fact that we're all living in a new financial reality. Mal was offered a tiny goat's cheese tartlet 'with chip' (which we wrongly assumed to be a typo on the menu!), I got three wee bits of potato skin with some cheese on them, and Bea got a salady thing. But at least what food there was tasted nice. A crazy feedback loop of alcoholism nearly occured when Bea and I had a dire need of a drink when we saw the price of our wine on the bill, but we rose above it admirably.

After Christ Church heads were spinning a little bit due to a bizarre conversation that took place with someone we met after leaving. We took a little time out to admire the graffiti. We were surprised to learn that there seems to be a campaign underway to overthrow the Italics!

Then we made our way to the cinema to watch a fantastically odd Norwegian film. It had been a long day, and the rest of the country was waiting to be discovered. We made our way back to base via one or two bars, and got ready to move along the next day. 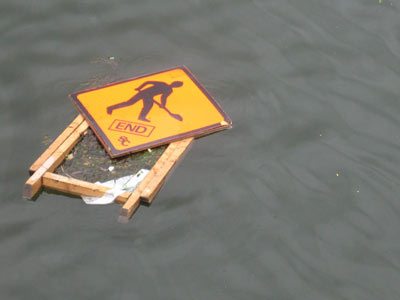