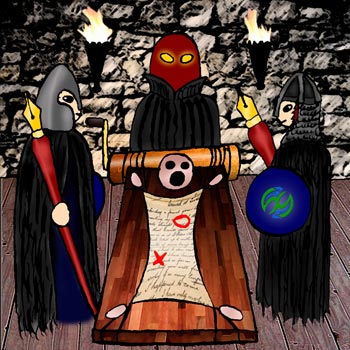 Where Skanky's Notes still ought to have been, only they're Pinniped's again...

OK, right, how do I put this? The good news is, the Stretcher is so authentic that we even have panel petulance, just like those grown-up talent shows. I mean, if judges are going to entertain, it stands to reason that they have to fall out sometimes, right? The bad news is, that after the latest episode Rich said OK, no hard feelings, but he isn't coming back.

I probably ought to say it was all my fault, and it was me that said the right-out-of-order stuff. Well, I guess in those terms it was indeed all my fault. It was my fault in any terms in fact, except the fairly important terms of he walked and I'm still here.

Anyway, just GB and me judging this week, with some reshaping to follow that we can discuss later. For now, here are the remaining judging scores, down there is the Next Challenge, and you guys can decide for yourselves who's Simon and who's Louis.

This is difficulty to judge, I mean, I knew all this. I accepted it as it was 'me' though, that had this problem. Just me. You can't imaginate the reliefly with which I am now going to assembly mode my computer to reject incorrectly spelled (spelt? – both pass the thing) which have been 'added' by others. Muchas gracias. (Everything in this review passed my computer's spell-check function.)

If you're setting out to write something funny, the first thing you need to get right is the subject matter. It doesn't have to be smirk-inducing, but it does at least need enough character to get to grips with. Spellcheckers are a seriously featureless topic, don't you think? If we'd set you a challenge to write a funny Entry about spellcheckers, you'd have been justified in crying ‘unfair', and suggesting we respond with something about Professional Golf in Second Century Palestine, or similar.

So you set yourself a high hurdle. Did you clear it? No, sorry, you didn't. The outcome is a solid-enough Entry with statutory helpings of quirkiness and whimsy, but funny? Not really.

Know your internet weirdo: a handy cut-out-and-weep guide
by
Beatrice

Hello Beatrice! 'Fiendish Stretcher judge' reporting on your Internet weirdo entry. Loved the Latinized names you made up for the different types. You made full use of the footnote humour they were originally designed for, I believe, and good to see the current news item of MPs' expenses referenced here. One to savour and I look forward to the final version including PR comments.

Promising subject this time, but the delivery's restrained and the outcome's flat. The mock Latin, though diligently repeated, is still only one joke. Humour needs swings, but Bea habitually does steady.

The stipulation of writing for the Edited Guide was a deliberate cruel twist in this challenge, of course, but it's almost as if this Entry anticipates the moderating influence of Peer Review, and makes sure there's nothing too contentious and opinionated beforehand. You don't need to be outrageous to be funny, but you do have to take some measure of risk. This is amusing then, but well short of what we asked for.

How to Write a Scientific Paper
by
Danny B

The opening quote made me laugh, and I didn't stop. I didn't realise quite how topical this piece was until the final sentence when I almost spurted my tea on the monitor. At last duck humour has overtaken swine flu jokes. Hoorah!

Too much of an in-joke really. I smiled at this one more than any of the others, but only because I belong to the tragic minority subjected to this arcane ritual. Will others get it? Maybe some will, but they'll most likely find it cliquish too.

That said, it's well written and very polished. It's hard to imagine anyone making a better job of this particular subject. In a perverse sort of a way, too, some of us out here will actually find it useful. There's not much of the Edited Guide you can say that about.

How Tender Are Your Buttons? Alice and Gertrude and What They Taught Us
by
dmitrigheorgheni

I found this entertaining and amusing, and my knowledge expanded somewhat, as I'd never heard of any of these characters. I'll be making a trip to my local library during half-term to pick up a couple of books to enlighten me further!

Among the best of an indifferent bunch. This challenge was a gimme for dmitri, because he can be very witty indeed, but this almost reads like he thought he'd better temper it and not be too conspicuous. It's a very good Entry, but it's not exactly hilarious. Instead, it politely invites you to add your own innuendos to an ever-so slightly risqué discourse.

A chance missed to run clear of the pack then. I suspect that there are 'winning not important' sentiments in play here, and that's a shame because the only effect of it (like with Alex's spellcheckers) is a bedding-down of the lowest common denominator. Stretch yourself, or I'm going to award you Honorary British Citizenship. That'd teach you all about the dignity of coming second.

Not sure it was a subject I was going to find funny, which was the Stretcher criteria this week. However, the Basil Fawlty-esque rant nailed it for me. On a personal note, thank you for writing this. I hereby award you a certificate for a free Indian Head Massage, which can be cashed in anytime in the Judges' sumptuous quarters, although I can't guarantee who will be performing it – just don't be disappointed if it's me.

This one's a particularly good Entry, but it's too heartfelt for laughs. There are two poles of comedy. One is black humour, where a careworn and earnest treatment can be effective. The other is light comedy, and thrives on the carefree and frivolous. This is neither one thing nor the other.

It kept my attention though, in spite of a subject that has me making excuses when encountered at parties. If it had come somewhere near answering the challenge it would have won, since somewhere near is the best that anyone managed.

The latest Challenge is a special commission from the Alternative Writing Workshop.

You are on the yacht Nirvana, somewhere between islands. It's well past midnight and the chaise-longues on the deck outside are empty, but the five of you are still engaged in bright and dazzling conversation. The bald croupier waits patiently at the table and the seal-like cocktail waiter polishes glasses a little way off. At that moment, your hostess sweeps into the lounge, dripping with jewels, with a snap of gloved fingers to summon more champagne.

I just lur-ve these evenings under the stars, dah-links, she purrs. But now you must all indulge me. We must have stories. Each one of you must tell me of your most memorable night in the tropics. Maybe it will be fraught with excitement, maybe it will be a little naughty, but whatever it is, I insist upon sophistication.

And one by one, the five of you recount your tales, in a maximum of fifteen hundred words and in the first person, by midnight UK time on Thursday 4th June. Oh b*gger. We didn't break the mood there, did we?