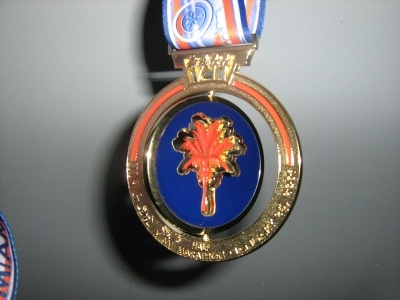 Marathon morning started very early, with us going to sleep around 1am. Or anyway, going to bed. We mostly tossed and turned. I gazed in utter despair at the clock at 1:34 and 2:17. At 2:48 I took a stroll around the room. At 3:00 I took a bathroom break. Then the alarm rang at 3:50 waking me up, so I must have got about 45 minutes of shut-eye, all told. Hannah wasn't in any better condition.

We got ready and went downstairs, were herded onto buses, off of buses, and to the starting line.

It was still dark and cool, but the circle of corrals was alive with energy and warm with bodies. Team Lifeline milled around the starting line, pumping our fists and shouting 'Yeah!' and posing for photos and doing such things as people are wont to do under such circumstances. We took a group shot, and then dispersed to our starting corrals.

A marathon is an unusual yet intimate way to get to know a city. As we crossed the first causeway, Miami stood beautifully lit up before us. Huge, glowing ocean cruise ships dwarfed us as we passed. At times, all was quiet except for the slap of rubber on cement, breathing, and an occasional exchange of words between runners. At others, police and tug boats flashed their lights and blew their foghorns. Volunteers blared music from speakers on corners. It seemed like the city paid an admiring tribute to the runners. At other times, as we ran down streets empty but for a few people with signs, it was clear that Miami had yet to take its marathon as seriously as New York and Boston do.

Miles 1-4: easy. Am impressed with self because I never did more than 4 miles in training.

The neighborhoods they chose for the route were exceedingly beautiful.

On Saturday, one of the guys was making fun of the assembly. 'To be here,' he said, 'you can't admit to having trained, and you have to be recovering from an injury. So, I haven't gotten off the couch in two months, and I have two broken ankles!'

What's the surprise? We were here because we wanted to support a worthy cause. Running was secondary.

But I had to laugh, because I hadn't run in over a month due to a hip strain. It kicked in during the 6th and 7th mile. (Note: I found out that it was a sprain that I ran five miles on.)

T-shirt sighted: 'Failure is not an option.'

ING cheering squad painted all orange does dance routine on the side.

Mile 10-11: am visualizing myself with my right leg torn off at the hip, like a mutilated Barbie doll. Oddly, it feels better when I run than when I walk, but my lungs can't sustain the pace my legs prefer. My body has become a house divided against itself.

There are hydration stations every mile. The ground is slick with Gatorade and water, and littered with paper cups that rattle as we run over them.

I should take this moment to thank all the people who came out to cheer for Team Lifeline. When we saw you guys shouting and waving ahead, we got a burst of energy we didn't know we had to move faster, with more style, so we could pass you waving and cheering, united in our support of the organization. When you had a camera, we really drew on unknown reserves to posture heroically as we passed. And when we did, we realized we had the strength, and could go farther for longer. Thank you.

Mile 13.1: Staggering along, wondering when it would be over. Heard a man say 'Only a quarter of a mile left!'

'Only a quarter of a mile?' I ask in disbelief.

'Only a quarter of a mile!' he calls with a grin.

I smile back and pick up the pace.

I couldn't believe it. I was done! People dressed up in armor knighted us with the medals. I wandered through the jubilant atmosphere of celebration, wanting to jump and dance with elation, but, like everyone else, weighed down with the miles I'd ran. I wandered slowly over to the Team Lifeline tent, taking water, a banana, a mini-Starbucks latte, as they were offered. I sign in, I stretch, I grab a sign and a friend and head out to do some cheer leading.

The post race seemed so anticlimactic. Months of training and fund-raising culminated in an intense event that took less than six hours before noon. Back in the hotel, we clung to fragments of those moments of glory, trying to stretch the great event into something longer lasting. People wore their medals, discussed their timing, compared their injuries, and weighed 'cure-alls' for sore muscles while sitting around the pool.

Conclusion: There's an energy that builds in this kind of event. It starts with the gathering of the team, when you meet with people who have the same goal as you, and share your training stories with people who think it's just as important as you do. It builds with the renewed awareness of the importance of the cause. It expands on the marathon morning, surrounded by people attempting the same feat you are, and with bystanders and cheering squads who call you 'hero' and 'amazing.' And it culminates when you sprint across the finish line, victorious, arms aloft. Nor does it immediately subside. You are immediately surrounded by revellers, intoxicated with the impressiveness of what so many have achieved, and you are one of them, for now that you've done it yourself, you truly understand how awe-inspiring a feat it truly is.

Throughout the weekend, whenever we'd think of something we could have done better, we'd say, 'Oh well, next year.' Then we'd look at each other and ask, 'Next year?' Why should there be a next year? Will we want a next year? Could we do a next year? In the final mile of the half-marathon, 'next year' and 'possible' were the most unlikely word pair in our minds. But crossing the finish line and being swept up in the exhilaration, we begin to wonder, 'Why not a next year?' after all, it was doable. And it can only get easier.

Will I do it again? I don't know. There are too many factors to consider, and I still haven't recovered from that sprain. But, injury or not, it's not an experience I regret in the slightest. And for anyone looking to pair an invigorating goal with a meaningful one, I would recommend this as something you should try once.