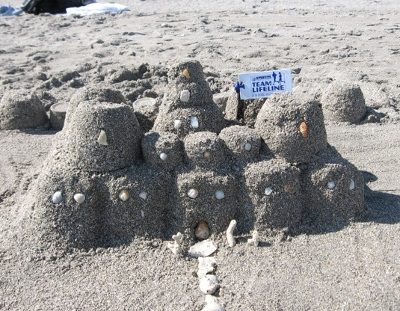 Road to the Miami Marathon

This past January, I ran the Miami half-marathon on behalf of Team Lifeline, a charity that helps kids with terminal illness. In return for raising $3,600, they flew me down and put me up in a hotel for three nights

I guess the trip really started with a conversation about deodorant.

It was the first time I really thought about the logistics of the trip. My friend Hannah, who was also running, IM'd that she couldn't fit a can of deodorant into the Ziploc bag of liquids permitted in carry-on luggage, and was thinking of checking a bag just so she could bring some along. I agreed she should – that way I could leave my own at home and use hers. There are no Ziploc bags in my house. She said, actually, she'd been hoping I would be checking a bag...

I said I'd rather smell. After all, there are hippy types who never use deodorant. And it was going to be a breezy 65F down there. How necessary could it be?

She called me a disgusting degenerate and decided that they probably have chain pharmacies in Miami, so things would be OK.

This is the kind of situation that leaves terrorists in hysterical laughter on long, cold nights in their mountain caves. But the fun has hardly begun.

It's been a while since I last negotiated airport security. For those like me, who have forgotten how fun and exciting it is (psychologists call this defense mechanism 'suppression'), here's a description. It's a bit like those relay races we used to play in summer camp. You know – you have to put on a whole pile of clothing and then run to the next person, tag them, and take it all off type. Only in reverse. You take off all your clothes, run through a metal detector, and then put it all back on.

You wait on line, psyched like a racer at the starting block. As soon as you pass the gray bins, you grab three. As soon as you reach the table, you plunk them down, and the race begins. You have mere seconds to remove your shoes, jacket, watch, belt, laptop, wallet, keys, and ziplock of liquids, while concurrently moving your bins down the table toward the machine. I completely forgot the liquids, but luckily, they didn't make a fuss over it. That was because by the time I passed through the metal detector, they'd completely forgotten to scan my bags. I was a ten-second hero.

It was because I was moving too hastily. I threw one sneaker into the bin, and reached for the other. To my horror, the sneaker hit the bin and bounced out on the other side of the table. It fell to the floor about two feet into the cordoned-off area beyond the table.

Now, the table was about two feet thick, and had a shelf-type of level thing running about two feet off the floor. There were no security personnel inside. I gazed at my shoe in despair. My knapsack and carry-on were already entering the machine. The bin with my laptop was approaching fast. But my sneaker!

The people on line watched with a detached interest. The man behind the machine kept looking up, out of curiosity. How was Leo going to get her foot gear back?

Desperate times call for desperate measures. There was about a foot and a half of wiggle room to duck under. I could do that. I did lower in karate class. It wasn't exactly dignified, but neither was disrobing for a security check. I took a deep breath, dove under the table, grabbed my sneaker, quickly reversed, and emerged victorious, sneaker held aloft.

Cheers from the line.

'Hey, that was athletic!' the security guy enthused.

'I sure hope they wash the floors,' said the businessman behind me.

I plunked the sneaker in my third bin and accepted congratulations all around. Then I was through, we were all dressing again and dispersing to our various gates. I entered the terminal, completely anonymous.

Ah fame. Such a fleeting thing.

I stepped out of the terminal and braced myself against the cold. It didn't come. I breathed out slowly, so I could watch my breath puff. It didn't puff. 'I don't think we're in New York anymore...' I thought. I wandered over to the taxi stand and signed myself up for a shared ride to the hotel. Then I stood there idly, waiting. I realized I wasn't feeling terribly excited. You'd think I walked out of airport terminals surrounded by palm trees all the time. Heck – you'd think I walked out of airport terminals all the time! I was in Miami! Slowly I started smiling.

People claim that between Starbucks and McDonalds, you can't tell American cities apart these days. So untrue. I would recognize Miami in a moment. It looks just like in those car racing games. Unlike in New York, where we build things tall and dark, Miami likes them low and white. Or at least light. And their trees are less shady.

I struck up a conversation with the lone guy sharing my ride in the 16-seater van. He was from Haiti, returning from post-op surgery in NY. He was glad to be out of the cold again.

I haven't been in many hotels, so maybe my judgement is off, but I thought this place was classy. Waterfall in front, loads of marble and mirrors, and the room looked like a picture from Architectural Digest. Or it did, before I made it look lived in. Hannah never got to see it like that. When I first saw the shower, I thought, 'It would be a pity to use that and mess it up.' The toilet paper was pointed at the end. The beds bounced nicely. All nine pillows bounced right off. The patio had a table, and chairs, and a view.

My favorite part? This notice near the towels:

Dear guest, Every day millions of gallons of water are used to wash towels that have only been used once. You make the choice: A towel on the rack means 'I will use again.' A towel on the floor means, 'Please replace.' Thank you for helping us conserve the Earth's vital resources.

Imagine if I tried that at home!

I immediately set about ruining the picture-perfect room by throwing my stuff around. Food went into the fridge. Jacket over the chair. Crocs on the floor.

There were two litre bottles of Evian behind the sink. 'How nice!' I thought, really impressed now. Then I leaned forward and peered at the label around their neck. The credit card I'd given them downstairs would be charged $5 for each bottle violated. 'How cheap!' I was indignant now. It somehow seemed crude. I went back and checked that there was no price tag on the toilet paper. There wasn't. Well, there's a relief.

Woke at 7am, and tried to stay in bed as long as possible for two reasons:

Hannah thought it was sacrilegious to get up before 10am and
between the hospital-cornered sheets, the inches-thick bedspread, and the numerous pillows, it was simple to just stay put.

However, I had to get up eventually. I'm not very good at lolling in bed doing nothing. And it was already 7:30!!! I got up, showered, dressed, and breakfasted on our veranda.

I stood there, the sun glinting off the water warm on my face, the light breeze caressing my face, the low, white city spread before me, and suddenly I felt like it was a crime, not a kindness, to let Hannah keep sleeping. I've never understood the point in going to a new location with many amenities just to sleep. If you want to sleep, stay home. So I gave her a ten-second warning that I was going to crash-land on her bed, and that I am no Captain Chesley Sullenberger, and then I did it. She was entirely unimpressed with my attempt at charity. I couldn't budge her, even with a beautiful rendition of 'Good morning to you.'

With a sigh, I went out without her.

I discovered that a line is not the shortest distance between two points when there are parking lots involved. At one point, getting to the beach would have involved diving over a parking lot wall and into another hotel's swimming pool (occupied by two old ladies, gently stirring the water like soup), and then over the pool wall into a fenced-off empty lot, then over the fence and onto the beach. I decided to go around.

The beach was deserted. Clearly, most of the world goes on vacation to sleep. I took off my sneakers and socks, left them on the sand, and walked along the surf.

The water there was a beautiful translucent blue. It rushes up the heavy, grainy sand, touching as high as it can with its lacy edges, and then retreats back.

'In New York,' I explained to the fisherman who looked puzzled when I asked him if he'd eat what he caught, 'The water is murky and green and I'd never eat anything that came out of it.' He waxed lyrical on the fish he caught and how delicious they tasted.

Another difference is, that here the horizon was unbroken in every direction, while in New York you have Far Rockaway peeking around one side, and on a clear day, you can see Staten Island in the other.

I could have stayed there all day thinking about things like 'How do you paint a wave on the sand?' and 'Is there some moral lesson we can learn from the persistence of the water repeatedly throwing itself on the sand?' But I thought it would be nice to share with my friend, so I headed back to the hotel, sneakers in hand. It seemed easier than trying to brush sand off my toes, but somehow, walking around barefoot looks less natural when you're standing at the edge of a highway, waiting for a lull in traffic.

As I waited for the light to change, a female running posse exited and started jogging up the block. It was a mother, teenage daughter, and teenager, all running together. Cute! But how on earth did they manage to raise $3,600 each?!

'Hey Hannah! Let's go skinny dipping Saturday night!' I said as I burst into the room.

A groan from her bed.

'So can we go?' I asked. Her head turned left, then right, eyes firmly shut.

It was a close call, but she did get up before noon. We hit the beach where we built Casa Lifeline using food storage containers (the crenellated wall in the background was cut out due to budgetary shortages), swam in the warm and—did I mention?—beautifully translucent water, and worked up a sunburn to make everyone at home wildly jealous.