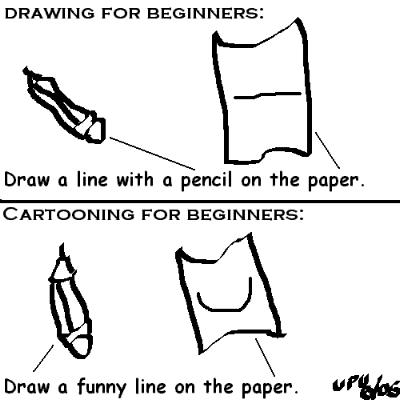 
Drawing as a way of irritating adults

I've been drawing ever since I first picked up a crayon. In fact, writing is a form of drawing to me,
and I was hobbled as a child by viewing numbers as cartoon characters. My father had filled our home with books of Pogo, Peanuts, MAD, Tumbleweeds, Wizard of Id, and Beetle Bailey.
To this day, I am fascinated by the shapes and characters of numbers and letters,
to the point of having to focus on what they mean instead of what
they look like. The numeral "7" still looks like Dean Martin to me, while the numeral "8" looks like Mae West.

I was convinced for years that I couldn't draw cartoons because I was a crappy
drawer and a bad writer. Then, one day, I was epiphanied by sincere egotism when
I realized that those two qualities are exactly what is called for. I can't remember
what I was looking at. I've studied art and anti-art all my life. I think I was working
with my daughter, Shnooks, trying to help her with the bias against her left-handedness.

I was excoriated as a child for drawing where and when I shouldn't, except at school. I once had a math teacher in Jr. High who enjoyed my caricatures of him (silly me, I can't remember his name) despite the fact that I sucked in his class. My stepfather once gave me a pile of crap for drawing on note paper, saying that I was wasting school supplies. He also gave me a lot of flack for writing, but that's a different story.

I have piles of drawings that I made over the years. Most of them are explorations of the blank space interrupted by a line. Others are fun with rulers, protractors and crayons and coloured pencils. When I discovered the joys of dip pens and ink pots, I spent years trying to find the write paper to use. Now I just use gel-based ballpoints on any paper I can find. I carried a sketchbook with me everywhere for years, now I just carry wads of typing or copier paper.

Once upon a time, a couple years after I got out of the army, more about which never, I was swimming in the depths of the otherworldliness that Aspergers Syndrome had bequeathed me and I was incapable of dealing with the blank page as a canvas. I was completely useless as an artist. I was surrounded by art and I studied art, and I was living with an artist, but I think the change in venues had short-circuited my 'ittle id.

My ability to do anything on this site is remarkable considering how much trouble I have had with computers. I am still using the first one I ever accessed the web with, my previous boat anchor (it was free because it was obsolete) being a 386 that could barely function, let alone go online. I am technologically handicapped. It took me three tries over a decade before I learned to drive badly and another twenty years before I learned to drive not so badly. It was only when I learned to drive a forklift under horrifying conditions
a couple years ago that I really learned how to drive.


I learned how to use the internet and my computer thanks to the folks on this site. I discovered H2 early in my internet ramblings thanks to my friend in Austin, Charlie Boas. I also made more friends on this site than I ever have in RL. It would be pitiful if it weren't WONDERFUL.

It took me years to go from pounding a typewriter to using a word processing programme (still not very good at it). It took me only a few seconds with my first boat anchor to find the Paint program and start drawing with the mouse. A blank space is a blank space is a blank space. And it took only a few months on this site before I was submitting graphics for the old AGG-GAG column. The logo for Escape Pod Dreams is mine also.

Platypus Dancing is an exercise in isolation. I have wasted film for decades. Much of it is still undeveloped. I have used, for the most part, antique cameras, Mirandas, Brownies, Argus C-3's, and now an ancient Praktica. The fun is not in the results, but in the composition. I use my eye and my memory of composition within the eyepiece frame when I draw Platypus Dancing.

My intention in scribbling (okay, pecking) out this essay is not to show off. No, I wish to inform those who believe they cannot draw or cartoon that it is much easier than it looks. And the results are much more satisfying than looking at someone else's stuff.