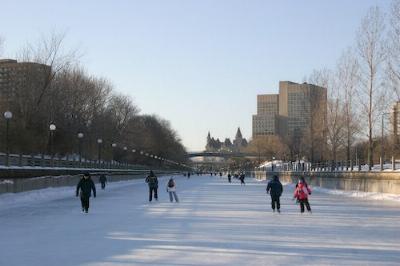 Every winter, the city of Ottawa empties the Rideau Canal, floods it with a few metres of water, and then waits for it to freeze over. The resulting ice sheet is, at just under eight kilometres, billed as the longest ice rink in the world.

I just had to see it, and to skate the entire length. First, however, I had to learn to skate. That was easier to arrange than I had expected; despite an outside temperature in the mid thirties, ice rinks are relatively common in Australia, and so I enrolled on a beginners course.

It soon became clear that Australians tackle skating just as they tackle any other sport; they become experts from about age 5. Thus it was that my beginners' group consisted of a bunch of, presumably, slow kids, and a selection of adults from tropical countries who had never even seen ice before, let alone considered skating on it.

Our teacher, Slav, who just happened (like most of the other instructors) to be a world class figure skater, had us in stitches as we tried to 'walk like penguin', 'balance cocktail on head', 'drive in little car' until, suddenly and miraculously, I found that I was skating.

There's no point in rushing these things, and we were carrying our skates anyway, so we decided to make a couple of practice stops on the way to Ottawa. Every winter, London hosts a number of artificial rinks, including one under the Tower of London, and another in the grounds of Somerset House.

The Tower was closed when we arrived, but we got tickets for a session at Somerset House. The rink was beautifully situated at the bottom of the grand staircase, and ringed with flaming torches. It was a little crowded at times, and I was glad of my lessons. Amongst the stumbling Londoners, I actually felt quite graceful, for the first and probably the last time in my life. 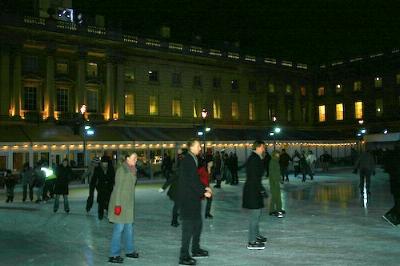 Scene of a hundred Hollywood love stories, the rink beneath the Rockefeller Center was a 'must do'. It's a tiny, crowded space, and the ice is wet and rutted, but heck it was fun! 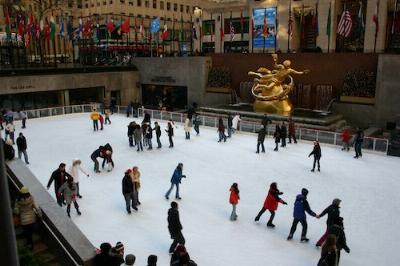 On our arrival in Ottawa, the weather was unseasonably warm and the canal had still not frozen. The opening of the rink is central to the annual Winterlude festival, which takes place largely on the ice, and there was muttering talk of relocating it to indoor parts of the city.

Every morning, council workers went out onto the ice, and declared that it wasn't yet thick enough to open.

We just had to wait it out, but it didn't mean that we couldn't go skating; we were lucky enough to have the opportunity to go to a childrens' birthday skating party.

It quickly became painfully obvious to me that Canadians are born on ice skates. The kids ran rings around the adults, and quite a few of the parents took the odd moment out to gently relive their glory days, pausing now and then for an effortless reverse or salchow before continuing to tend their offspring. In contrast, I lumbered around like a drunken ox, and in my attempts to look even slightly stylish I completely messed up a hockey stop and smacked my head on the ice.

A week later, Winterlude opened! The last time we had been to Dowes Lake, we had pedalled around the leafy calm waters on a tandem bicycle. This time we were presented with a hard white expanse, scattered with benches and tents and hot dog stalls. We donned our skates in one of the marquees, and set off. 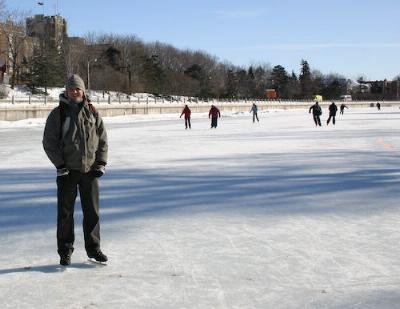 Dowes Lake itself was beautifully smooth, but once we entered the canal proper, the surface began to differ substantially from that of a man-made rink. Although the ice was patrolled regularly by snowploughs, and any holes repaired each night, the surface had definitely been formed by the hands of nature rather than by any artificial agency. Small pressure ridges and cracks focussed the mind, and the solid and concentrated stance of the locals contrasted with the nose-high dance steps that I had been taught in my lessons.

There was, however, plenty of space to go around rough patches and the odd drift of windblown snow, and plenty of time to marvel at the local residents pushing their babies, carrying their shopping, or simply commuting to work, along this ephemeral highway that had appeared in the middle of their city.

We passed the three-kilometre mark. I was quite pleased with myself. The different surface was not the only thing that I had to get used to; up until now I had only ever skated for perhaps ten strides in a straight line before pausing for the turn at the end of the rink. Here, there was no reason to turn, just the occasional gentle arc to avoid other happy couples, and families towing or pushing their children in sleighs. My thigh muscles began to protest the continual, unfamiliar activity, but I thought that I had it under control.

Kilometre four came, and I paused, panting, under a bridge to take some photos. I was wearing far too many warm layers, even though it was well below zero and we were now entering the notorious 'wind tunnel', a deep cutting with a perpetual headwind.

At five kilometres, I got distracted while skirting an orange-painted borehole, and tripped over my own feet. Hitting the ice is a bit like being rear-ended in a car accident; it hurts a bit, but you know that it's going to be much worse in the morning.

As I sat on a handy bench to recover, a passing lady stopped for a chat as she put on her skates. This was her first time back on the ice since breaking her leg at the previous Winterlude.

The final straight came into view, one or two more bridges and then the welcoming facades of the tents and huts marking the end of the rink. Bronwyn glided effortlessly ahead to buy cups of hot chocolate and beavertail waffles.

I, on the other hand, concentrated on forcing my leaden feet into every stroke; left, right, left, right. It was getting harder to find the energy to lift the skate clear, and three times in quick succession I caught the toe-pick and tumbled down. Tomorrow was really going to hurt.

And then, miraculously, I stumbled into a handy bench. I had arrived, and Bronwyn drifted up with fried dough and chocolate and marshmallows, and I had done it! I had skated the longest ice rink in the world. 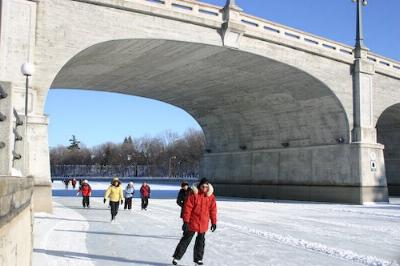