Hookahs Content from the guide to life, the universe and everything 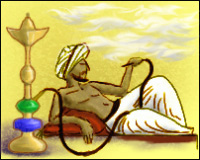 The Caterpillar and Alice looked at each other for some time in silence: at last the Caterpillar took the hookah out of its mouth, and addressed her in a languid, sleepy voice ... 'Who are YOU?' said the Caterpillar.
- Alice's Adventures in Wonderland - by Lewis Carroll

Perhaps there are many who've read this passage more than once without thinking to establish what the caterpillar was doing with a 'hookah' in its mouth, but either Lewis Carroll was making some oblique reference to Middle Eastern culture, or, seemingly more likely judging by the rest of the book, he was implying that the caterpillar is well-and-truly stoned. And as such, surely no other children's literary classic makes such explicit reference to recreational drug-taking? However, if that was what Carroll intended, then he was in fact propagating an old Western stereotype: contrary to what many people think, the hookah is used not for smoking hashish, but water-cooled, flavoured tobacco.

But What Is a Hookah?

What, indeed? Perhaps better known to Western audiences as a 'hubbly-bubbly', the hookah (or sheesha) is a quintessential part of Arabic social culture stretching from Morocco to Muscat. Physically, the hookah consists of a flexible tube, with a container of water at one end and a mouthpiece at the other. Above the container of water, usually at the top of a tallish stem, is a sort of ash-tray-cum-filter where charcoal and scented tobacco are allowed to smoulder slowly. Inhaling, by drawing on the mouthpiece, pulls the smoke down the stem of the tube, through the water and, via the tube and mouthpiece, into the mouth and lungs. Really, it's just a somewhat convoluted way of smoking, although the smoke is smooth, cool and tasty.

The Origin of Hookah

Despite contemporary synonymy with Bedouin camps and Persian rugs, the hookah is said to have originated in India, or perhaps even as far afield as China. In the 17th Century, smoking sheesha took off in Turkey, where it is known as nargileh.

Nowadays, hookah-smoking is a seemingly unbreakable social habit that, despite a vigorous anti-smoking lobby, is growing in popularity, especially among non-Arabs. All across the Arabic world, sheesha-parlours (coffee shops) attract their clientele with an almost irresistible waft of scented tobacco, luring people inside for an evening of cards, backgammon and, of course, smoking.

How to Get the Best out of your Hookah

The sheesha (as the tobacco is sometimes called) typically consists of whole-leaf tobacco which has been dried, soaked, crumbled and then scented. The bowl of the hookah pipe is then packed with the moist product and fired by smouldering charcoal or coals. In fact, it is not entirely unusual to find camel dung used as the fuel for the fire.

Plain unscented tobacco (saloum) exists as an option, but flavours including strawberry, apple, rose or mint are generally preferred.

Hookah users will advise that the sheesha may, on account of its moist consistency, show a tendency to 'clump', so it should be crumbled as it is placed in the bowl of the hookah. This will encourage a fuller flavour. To enhance the smoking experience still further, use either water flavoured with some citrus fruit juice or, better still, use milk instead of water to make the smoke thicker.

As with all pleasures, the wise man recommends to avoid excess.

What responsible entry on smoking would be complete without due notification of the risks of smoking? Hookah smokers may feel that the hookah is a safe alternative to smoking cigarettes, but doctors take a dim view of this. Whereas smoking a fag1 lasts around five minutes, a full-on hookah experience can last over half an hour.

1British slang for a cigarette.