'The Abominable Snow Baby' - the Television Animation Content from the guide to life, the universe and everything 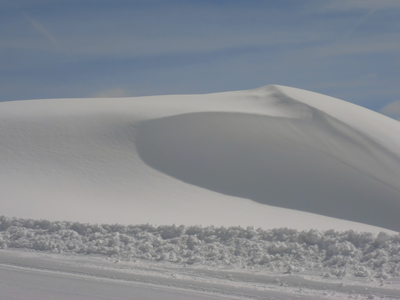 Terry Pratchett's The Abominable Snow Baby is a short 2021 animated adaptation of one of Sir Terry Pratchett's lesser known short stories, written for the Bucks Free Press long before he was famous and associated with Discworld. 25 minutes long, it was broadcast on Christmas Day 2021 in a primetime slot as the family highlight of Channel 4's Christmas Day schedule, traditionally the most important day in the television calendar.

One harsh winter in the town of Buckbury in Gritshire results in snowfall unlike any previously seen, completely burying the town up to the level of the rooftops, and cutting the town off from the rest of the world. After Granny and her grandson are reunited having dug tunnels through the snow, they learn that a giant 14ft monster has been spotted in the town, the Abominable Snow Baby. It is soon adopted by Granny, much to the disgust of everyone else in town. But what will happen when the snow baby's mother returns to look for her baby, and who is brave enough to join a rescue party to the wilds of Even Moor?

This is one of several short stories Terry Pratchett set in the fictional town of Buckbury in Gritshire. He was writing for the Bucks Free Press, a local weekly paper in Buckinghamshire between 1966 and 1973 for the Children's Circle section. The most famous of these stories evolved into The Carpet People (1973). Most lay forgotten until they were serialised into anthologies The Witch's Vacuum Cleaner and Other Stories, Dragons At Crumbling Castle And Other Stories, Father Christmas's Fake Beard and Other Stories and The Time-travelling Caveman and Other Stories. 'The Abominable Snow Baby' is just one of the stories, with many others set around Christmas, that would be ideal for further Christmas Day adaptations.

Dame Julie Walters made her mark as a comic actress, often appearing alongside Victoria Wood, as well as starring in Educating Rita (1983). Like many comic actresses, her talents, including impeccable timing and ability to flawlessly step into any character, allowed her to bridge the gap and cross over into regular acting. Her most famous role was appearing in the Harry Potter film series as Molly Weasley, and she survived the Mamma Mia! films with her career intact. She has twice been nominated for an Academy Award.

Snowballing: The Making Of

Channel 4 has long held a strong reputation for its annual Christmas animations of classic children's books, beginning in 1982 with its timeless Oscar-nominated adaptation of Raymond Briggs' The Snowman. This was cemented with further half-hour animated adaptations of Briggs' work including Father Christmas1 (1991) and The Bear (1998). After a break of a few years, Channel 4 once again returned to animation with a sequel to their most beloved work, The Snowman and the Snowdog (2012). In more recent years the BBC has challenged Channel 4 with high-quality half-hour animated adaptations of their own, broadcasting Julia Donaldson and Axel Scheffler short films following the Oscar-nominated The Gruffalo2 (2009) on Christmas Day.

Channel 4 has responded by showing adaptations of other classic children's stories by beloved authors such as Michael Rosen's We're Going on a Bear Hunt (2016), Judith Kerr's 1968 classic The Tiger Who Came to Tea (2019) and Quentin Blake's The Clown (2020). In 2021 they adapted The Abominable Snow Baby by former children's laureate Sir Terry Pratchett, feeling that it recaptured the vibe and atmosphere of The Snowman.

Pratchett was new to me – I'd obviously heard of him and seen him interviewed, and thought how interesting he was, but... I'd never read any of his books. I play Granny, who's 98 years old and full of vim. I've played ancient people since I was in my 20s, I'm fascinated by old people. Perhaps because I was brought up with my grandmother, who was a bit doolally and had a massive influence on us as children. And of course I am one now. ['The Abominable Snow Baby'] is definitely a heart-warmer. It's about community and friendship and love and all the things that we've missed over the last nearly two years [because of the COVID-19 pandemic]. It's very uplifting.

The Abominable Snow Baby is a worthy successor to The Snowman, which despite the deceptively simple animation style, rewards multiple viewings. Its homage to the earlier classic can be seen in the way that Albert runs and puts on his wellies to go out in the snow in exactly the same way that James does in The Snowman. The way Albert interacts with snow is as realistic as James in the earlier film – James makes a flying snowman who takes him to the North Pole, whereas Albert's shovelled snow tunnels seem to defy physics with the snow excavated from the tunnels either shrinking or disappearing.

The Abominable Snow Baby follows the short story very closely, though expands slightly on the very short story in some places, but never to the detriment of the tale. These tweaks never feel out of place. Unlike other Channel 4 adaptations, the short film does not adapt the style of the illustrations by Mark Beech in the published short story, possibly because the source story and especially its illustrations are much less famous than most of their adaptations. This though makes is feel much more in keeping with Channel 4's prestigious tradition.

Newspaper The Guardian reviewed the episode with the words: 'It’s the Christmas telly we deserve.'