Melvil Dewey: Libraries, Antisemitism, and Sexual Harassment Content from the guide to life, the universe and everything 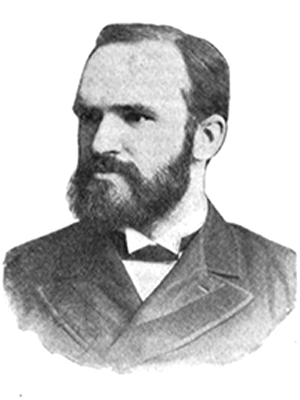 My heart is open to anything that's either decimal or about libraries.
- Melvil Dewey

Melvil Dewey (1851-1931) is mostly remembered as the inventor of the Dewey Decimal System, a rule for cataloguing books still widely used in libraries today. He started the first school for Library Science at Columbia University, and served as State Librarian for the state of New York. Dewey standardised card catalogues and invented the 'vertical file' and the perforating library stamp1. He was one of the founders of the American Library Association (ALA).

A highly eccentric character, Dewey also waged lifelong campaigns to simplify English spelling2 and get the US to adopt the metric system3.

Odd as he was, Melvil Dewey was a moving force in opening librarianship to women as a profession in the late 19th Century. You would think he would be honoured for this. But Dewey is a textbook example of a 'problematic' figure. He was manoeuvred out of every prestigious job he held. He was avoided by library and spelling-reform buff Andrew Carnegie. He was shunned by the ALA and excoriated by New York state newspapers. You might be surprised, but some influential people in 1905 didn't approve of antisemitism or sexual harassment – and Dewey was guilty of both.

I have some Hebrew friends who are very charming.
- Melvil Dewey

In spite of Dewey's insistence that some of his 'Hebrew friends... are very charming,' most of Dewey's friends and associates were what were called WASPs: White Anglo-Saxon Protestants. These weighty men who controlled government, business, legal, and cultural institutions at the beginning of the 20th Century believed that the ethics and values of their group should be the defining standards of civilisation the world over. In the United States, this meant limiting the influence of Catholics, Jews, Blacks, and non-Anglo-Saxon4 immigrants.

Before going further, we should probably point out that men like Melvil Dewey were considered 'progressive' in their day. Dewey had grown up in the Burned-Over District of upstate New York, a region that was famous for its religious and reforming fervour5. Dewey believed in educational reform. He wanted to make the world better, more moral, and more efficient. He was very single-minded about what he regarded as his 'destiny' to improve the world, whether the world wanted to be improved or not. And he could be a bully about it.

Reformer Dewey failed to see a conflict between the desire to improve society and the idea of excluding Jews from his Lake Placid Club. The Lake Placid Club was an Adirondack mountain retreat where wealthy, privileged, and morally upright WASPs rested from their labours in the field of societal betterment. The club encouraged healthy eating and good habits: there was no smoking, drinking, or dancing allowed. Only the 'right people' could join. And those people could not be Jewish. Dewey even bought up the property around his resort to make sure no 'Hebrews' bought up land for their own club.

It could be argued at this point that this was the right of the WASPs. After all, there were no laws against this kind of discrimination in 1905. What was the fuss about? The fuss was about the fact that Mr Dewey was State Librarian at the time. Prominent Jewish men, including those in government and library circles, took serious exception to his attitude. Members of the public objected to a public official's being so openly prejudiced. There were wars in the newspaper columns. Dewey was accused of using his position to benefit his club. This was probably true: Dewey routinely viewed all his endeavours, political, financial, or educational, as part of the mission implied by his 'destiny'.

Under intense pressure, Dewey resigned as State Librarian. But the club stayed restricted. He later founded another club, Lake Placid South, in Florida.

1905 was a bad year for Melvil Dewey. More problems were to come. They started with a trip to Alaska.

For many years women librarians have been the special prey of Mr Dewey in a series of outrages against decency, having serious and far reaching effects upon his victims while the association has echoed with the scandal.
- Tessa Kelso, 1924

Dewey was a happily married man. His wife Annie was a librarian, too. When women guests or co-workers complained about Dewey's behaviour – touching them without permission, hugging them, and even kissing them in public6   – his wife would explain that Dewey's intentions were 'pure' and he was being misunderstood by people less enlightened than himself.

In the summer of 1905, Dewey needed a vacation. He was being harassed politically, and he'd just managed to get himself elected to the presidency of the American Library Institute, a prestigious organisation he'd just founded. Dewey went on an Alaska cruise with a lot of colleagues, many of them female, but without his wife, who was very ill and staying at Kellogg's famous sanatorium in Battle Creek, Michigan. Dewey's behaviour towards his women colleagues on the 10-day cruise caused outrage. At least four female members of the ALA complained. Dewey never repented, but the ALA was in turmoil.

How did librarians feel about Dewey's behaviour? New York Public Library documents librarian Adelaide Hasse was very clear on the subject. She found Dewey's advances unwelcome and didn't enjoy the suggestive letter he sent her afterwards. She stated, 'We are a professional body, the members of which, encountering obnoxious personal traits in fellow members, must content ourselves to employ those defenses which reason, training, and character dictate.' Dewey was kicked out of the ALA. Remarkably, the professional women of 1905 dared to name and shame harassment and insist on their rights.

Dewey's reputation for social impropriety towards women never improved. His son Godfrey moved out of the family home with his wife Marjorie because of Melvil Dewey's overly familiar behaviour towards his daughter-in-law. In 1929, the 78-year-old was forced to pay $2,147 to settle a harassment lawsuit brought by his former secretary. Dewey had fondled and kissed her in public. (He also referred to her in a letter as a 'dainty little flapper'.)

In the fall of 1925, Dewey became very ill with the flu and from November 9 through December 21, he told Foundation trustees, he was 'in bed with a traind nurse.'
- Wayne A Wiegand, Irrepressible Reformer,1996.

After Dewey died in 1931, historians seldom mentioned his reputation. His memory was honoured as an innovator in the field of library history. Early biographers tended to gloss over his offensive behaviour. The publication of Wayne A Wiegand's Irrepressible Reformer: A Biography of Melvil Dewey in 1996 changed public perception a great deal. This academic but highly readable study occupied 15 years of the author's life7 and drastically changed the landscape of Dewey scholarship.

Public awareness of issues surrounding sexual harassment also, possibly, contributed to a 2019 decision of the ALA. They decided to remove Melvil Dewey's name from their most prestigious award, previously called the Melvil Dewey Medal. Adelaide Hasse would no doubt have approved.

1Perforating library stamps allowed libraries to mark their property without making the marked pages thicker, as embossed stamps did.2He changed the spelling of his name from 'Melville' to 'Melvil' in the interest of 'efficiency'. For a time, he spelled his last name 'Dui', until a supporter convinced him the state of New York wasn't going to hire him if he didn't behave a bit more normally.3Trying to get the US to adopt the metric system is widely viewed as an eccentric activity, at least in the United States.4While to historians and linguists the term 'Anglo-Saxon' is used exclusively to refer to the period circa 450-1066 AD and the associated Old English language, in the late-19th and early 20th centuries the term was frequently misused in a racial sense.5The Burned-Over District was so-called because the fire of revival had so inflamed the people that no area was left with even a smouldering ember when the Second Great Awakening was finished. The Millerites came from this area. Mormonism and Spiritualism were born there. The Shakers and the Oneida Community lived there. You get the idea.6Even if hugging or kissing an unrelated woman in public wasn't intended as sexual harassment, the mere act of doing it could damage the woman's social standing.7'I started this study when all my children were still at home... I finished it... after welcoming my first grandchild into the world.' - Wayne Wiegand.