The Peccadillos of Pepe Le Pew Content from the guide to life, the universe and everything 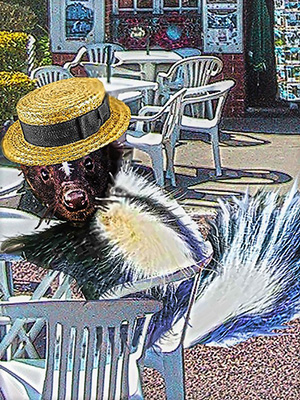 Pepe le Pew, the animated skunk star of Warner Brothers' cartoons, is known for his hopeless pursuit of l'amour in all the wrong places. He's made generations laugh. But since 2021, the Franglais-spouting skunk has been in bad odour with the public. He's being accused, not without justification, of sexual harassment, though to be honest, he mostly sexually harasses cartoon cats. Just who is this character, and how did he come about? Where should we place the blame for this kittée quel terrible odeur?

Termite Terrace, and What They Did There

In the 1930s, Warner Brothers cartoonists such as Chuck Jones worked at first in a cramped prefabricated building on the studio lot that was infested with strange people and, often, unwanted pests. They called it Termite Terrace, which became the name for their operation even when they moved to better quarters. Termite Terrace designed and produced elaborately-drawn cartoon shorts to be shown in movie theatres. During the Second World War, they produced cartoons for the military, as well.

The animated shorts were intended for adult audiences. They were also intended to amuse, rather than to convey a moral or make much sense. And they were never very logical. By and large, Warner Brothers cartoons featured the following:

Please pay attention to Point 3. Point 3 is the one that causes the most puzzlement in the 21st Century. After all, explaining to kids that Bugs Bunny eats carrots1 because of something Clark Gable did in It Happened One Night is hard. Often, kids will mutter, 'Who the heck is that supposed to be?' at an obvious cartoon burlesque of once-famous screen siren Mae West2. Cinema audiences of the 1930s and 1940s were used to this sort of thing, which was all about memes and fictional tropes. It was generally assumed that audiences knew that animals didn't really act like that – although the bunnies that keep being offered carrots could be forgiven for not being all that sure the audiences were that well-informed.

Where Pepe le Pew Came From, and Why He Talks That Way

Come with me to the Casbah, and we will make beautiful music together!
- Pepe le Pew (not Charles Boyer)

Chuck Jones, who invented Pepe le Pew, took his movie inspiration from Charles Boyer's performance as the irrepressible romantic criminal Pepe le Moko in the 1938 film Algiers, which most people remember for the American debut of Austrian actress/inventor Hedy Lamarr. Pepe le Moko has joie de vivre. He has savoir faire. He is, in short, what Americans of the time thought most Frenchmen were like: impulsive, suave, romantic, ebullient. This was probably about as accurate a depiction as the 'bunnies eat carrots' meme: Termite Terrace wasn't into geography or science. It was in the film trope business.

The plot of a Pepe le Pew cartoon involves a variation on this scenario:

Obviously, Pepe le Pew is a clueless skunk. He thinks he's a great lover, but he's very bad at this courtship business. Perhaps a lot of his frustration is due to the fact that he is French. There are no other skunks in France, forcing him to chase cats.

For people who aren't thinking about Charles Boyer or Hedy Lamarr, most of the humour of the cartoons – if there is any – consists of parsing the outrageous faux French that goes on.

Pepe can keep this up all day. The cat is no better, with her 'le mew, le purr.' Human passers-by exclaim, 'Le pew!' Pepe rejoices, 'Quelle est? Ah, la belle femme skunk fatale.' He refers to the cat, to whom he has not been properly introduced, as 'mah peanut of brittle'.

No French person would behave in this way. It is clear that Pepe le Pew is an obnoxious persiflage of the French language, romance, and human behaviour in general. In short, pretty much what a Warner Brothers cartoon usually was.

Do Humans Act That Way?

If a human acted like a cartoon skunk, that would be pretty pitiful, wouldn't it? Alas, Chuck Jones claimed he based the character on human behaviour (see Point 2 in the original checklist). Fellow cartoonist Tedd Pierce had a reputation for going overboard with romantic gestures after the first date. Apparently, Pierce regarded himself as a 'ladies' man,' a designation not ratified by the recipients of his attentions. In his memoir Chuck Amuck, Jones wrote: 'His devotion to women was at times pathetic, at times psychological, but always enthusiastic.'

It could be argued that lampooning pathetic human behaviour, rather than modelling ideal actions, is the legitimate purview of a genre as anarchic as the topical cinema animated short.

Responses to Pepe le Pew vary. In 1950, the animated short For Scent-imental Reasons actually won an Oscar for 'Best Animated Short'. These days, an Austrian Researcher opines that 'the French accent (which I believe he also has in German) is meant to make him 'attractive'.' A French Researcher notes:

Well, I'm not going to say it's nice seeing a smelly French sexual harasser, as those stereotypes get old pretty fast, but humour is subjective...

For Serious Research Purposes Only

The film Algiers is in the public domain and can be viewed in its entirety for free on YouTube.

For an exercise in extravagant absurdity, subject this film to postmodern criticism: Scent-imental Over You. Pepe pursues a disguised Chihuahua, exclaims 'Nom de plume!', and comes up with a species-bending strategy. This film may be of special interest to the Furry community.

1Rabbits don't consume root vegetables in the wild.2If you let your kids watch things like this, you may be part of the problem.