Hello Sailor or Hijack? The 'Nave Andromeda' Incident Content from the guide to life, the universe and everything 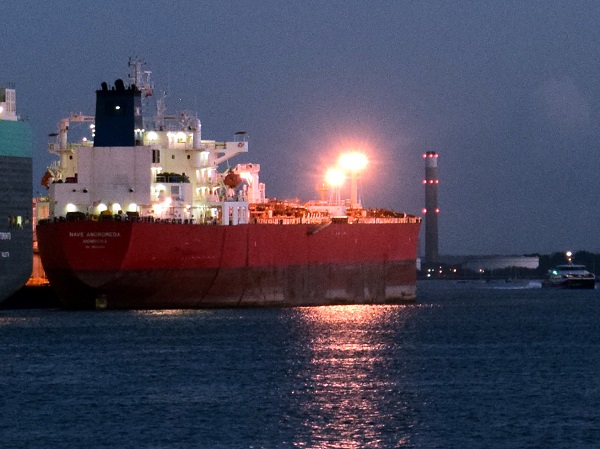 The Nave Andromeda is an approximately 750-foot (230-metre)-long Greek owned and Liberian flagged1 oil tanker built in 2011 and owned by the Greek Navios Tanker Management company. A gurt big ugly vessel capable of carrying 42,000 tons of crude oil, she gained notoriety on 25 October, 2020, when, off the coast of the Isle of Wight, she was boarded by members of the British armed forces to arrest and detain seven suspects who were on board illegally. This led to widespread media stories of pirates and hijackers. Was this really a case of Errol Flynn swinging through the rigging, or was the truth not quite so dramatic?

Voyage of the Damned

On 5 October, 2020, the ship left Lagos in Nigeria travelling empty to Southampton's Fawley oil refinery to collect a liquid cargo, when during the voyage it was realised that in addition to the crew of 22 there were seven Nigerian stowaways on board. On discovering this the ship headed towards Las Palmas, capital of the island of Gran Canaria. The ship arrived in the area of the Canary Islands on 15 October, dropping anchor outside the port and informing the Spanish authorities about the stowaways, only to be refused permission to dock. Had the Nave Andromeda docked, international law would have meant that the stowaways would have fallen into the local, in this case Spanish, jurisdiction, but by refusing permission to dock, the Spanish government failed to accept responsibility.

This was because of their interpretation of the International Maritime Organisation's official guidance, published in 2018 as part of the Convention on Facilitation of International Maritime Traffic. This states that it is the responsibility of the state of first port of call after the discovery of the stowaway to accept the stowaway, and when the disembarkation of a stowaway has not been possible at the first port of call, it is the responsibility of the state of the subsequent port of call to allow the person to leave the ship. The Spanish government's interpretation was that, as the original destination of the ship according to the voyage plan was Southampton, only Southampton counts as the first official port of call, and any attempt to deviate from that to another port are invalid.

The Nave Andromeda then followed the Portuguese and Spanish coasts and on 20 October spent 24 hours attempting to go to France's Donges refinery near Saint-Nazaire, once again being refused permission to dock and disembark the stowaways. The ship then headed north to the English Channel.

On 25 October, while six miles off the coast of the Isle of Wight, the stowaways became aggressive after the crew attempted to lock them in a cabin. They surrounded the ship's control room, smashing glass and intimidating the crew by threatening their lives. The ship's master remained in control of the bridge, the engineer was locked in the engine room, and the crew then locked themselves in the citadel, a ship's panic room. At 9am the captain issued a desperate Mayday:

I'm trying to keep them calm but please send help.

Many organisations responded by launching a joint operation, including the RNLI lifeboat from Bembridge, Hampshire Police, the Maritime and Coastguard Agency, and UK Border Force. A three-mile exclusion zone and no-fly zone beneath 5,000 feet was emplaced, despite the English Channel being among the world's busiest shipping lanes and flight corridors. During this time the ship began circling and zig-zagging off the Isle of Wight. Exclusively excluded from the exclusion zone were the police and coastguard helicopters closely monitoring the vessel and enforcing the exclusion zone. It was believed that the stowaways were likely to be asylum seekers or refugees rather than militants or terrorists, especially as by now they had been on the ship for 20 days.

A specialised military taskforce began to assemble in the Royal Marine's headquarters at nearby Poole in Dorset. They were waiting for the cover of darkness while studying the ship's blueprints which the owners had provided, allowing them to be prepared to retake the ship with absolute precision. This operation was led by forces of the SBS or Special Boat Service, the Royal Navy's special forces formed in 1940 and cousin of the far-more famous SAS or Special Air Service2. Under the cover of darkness and despite the gusty wind and heavy seas, at 7:30pm the troops approached the vessel in both RIBs3 with forces grappling onto the deck from the RIBs and others descending from Royal Navy Merlin helicopters, and snipers in Wildcat helicopters providing support. With 16 SBS troops on board, within seven minutes all seven stowaways were arrested without shots being fired or any injuries sustained.

The seven were arrested on suspicion of seizing or exercising control of a ship by use of threats or force under Section 9 (1) and (3) of the Aviation and Maritime and Security Act 1990. After the military gave the suspects into police custody, with the bail date set for 22 November, the ship carried on to Southampton docks. The Greek owners Navios Maritime Holdings later issued a statement saying the incident was '100 per cent not a hijacking' and military sources confirmed that the captain had always been in control of the vessel.

Despite the dramatic news headlines it seems likely that the stowaways were merely practicing an unorthodox method of asylum seeking. For example, just three days after the incident, 11 Albanian migrants, including a 17-year-old boy and a pregnant woman, were reported as having been discovered on the MV Salome, the ship that docked next to the Nave Andromeda in Southampton.

1The ship sailed under a Flag of Convenience – the country under which it is registered rather than the country the owners or operators of the ship – to take advantage of a different nation's less stringent labour laws and other regulations. 10% of all shipping is registered to Liberia, second only to Panama.2Not to be confused with SCS – Sofa Carpet Specialist - a UK-wide home furnishings company.3Rigid Inflatable Boats, fast-moving open-topped ships.