Watching 'Winterset': Blank Verse, Gangsters, and Political History Content from the guide to life, the universe and everything 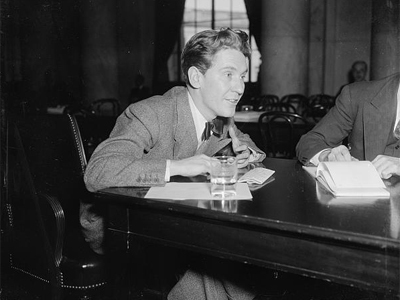 Why is this movie interesting? Isn't it just another Depression-Era gangster film? Actually, no. It's an altered version of the visionary American playwright Maxwell Anderson's blank verse drama. Also, it was based on the now-infamous Sacco/Vanzetti trial, so the play and movie are politically and historically important. It's also an opportunity to watch Broadway actors reprise their roles on film, so that we get to see what New York City audiences got to appreciate in 1935. All in all, this viewing is worth an hour and a quarter of our time.

Here is a bit of background.

For more than six years the Sacco-Vanzetti case has been before the courts of Massachusetts. In a state where ordinary murder trials are promptly dispatched such extraordinary delay in itself challenges attention. The fact is that a long succession of disclosures has aroused interest far beyond the boundaries of Massachusetts and even of the United States, until the case has become one of those rare causes célèbres which are of international concern.
– Felix Frankfurter

In 1921, two Italians, Nicola Sacco and Bartolomeo Vanzetti, were convicted of murder during the payroll robbery of a shoe factory in Massachusetts in 1920. They were sentenced to death. The appeals process was unusually long and drawn-out for the time, because legal experts like Harvard law professor Felix Frankfurter (later a Supreme Court justice) didn't feel that the conviction was sound. They pointed to contradictory evidence. They also pointed to the prejudice of the judge and jury.

Judges and juries were likely to be predisposed against Sacco and Vanzetti in the 1920s for two reasons: anti-Italian prejudice and the 'Red Scare', or fear of anarchists and communists. Sacco and Vanzetti were members of an anarchist movement. Saying 'anarchist' in 1920 was about the same as saying 'antifa' in 2020: the term meant about as much, since there were a wide variety of political beliefs connected with the name. But the general public associated anarchists with violence and bomb-throwing.

The lawyers' appeals were in vain: in 1927, both men were executed by electrocution. Maxwell Anderson was one of those who believed that a serious injustice had taken place. He knew about the evidence tampering, the prejudice, and the judicial misconduct – all of which show up in Winterset.

The Play's the Thing

Now all you silent powers
that make the sleet and dark, and never yet
have spoken, give us a sign, let the throw be ours
this once, on this longest night, when the winter sets1 his foot on the threshold leading up to spring
and enters with remembered cold – let fall
some mercy with the rain.
–  Winterset, Act III

Maxwell Anderson was very clever: he didn't write a docudrama about the Sacco/Vanzetti case. It wouldn't have been performed. Instead, he wrote a high-drama serious play with a Shakespearean ending. In the play, the son of an unjustly executed Italian anarchist falls in love with the sister of the witness who refused to exonerate his father. Both are killed by the real perpetrator of the crime. They die together in a hail of submachine bullets and blank verse.

The movie has a happier ending, so let's watch that instead. Besides, we don't have a time machine to go back to 1935, when Winterset was showing on Broadway. But we can go to the movies: Winterset is available for viewing on archive.org, or check your Youtube listings.

Mio Romagna (Burgess Meredith) has returned to the unnamed town from which he was expelled as a child after the execution of his father and the death of his mother. In common with other hobos of the Great Depression era, he has worked his way from coast to coast and gleaned his education where he can. Now, at 17, he's bright, witty, and very bitter. He has returned because there might be news that would exonerate his father and restore his reputation. Like Sacco and Vanzetti, Bartolomeo Romagna (played in the film flashback by John Carradine) was an activist and anarchist, but no murderer.

Trock Estrella (Eduardo Ciannelli) has been paroled from prison. He has six months to live, as he has a terminal disease. This will not stop him from killing just about everyone in this film in order to keep them from revealing the truth: that it was he, and not Bartolomeo Romagna, who killed the paymaster.

Miriamne Esdras (Margo) is the daughter of a poor and badly frightened rabbi. Her brother Garth (Paul Guilfoyle) was a witness to the murder, but never came forward. The family are lying low, hoping that Estrella will not bother with them.

Miriamne and Mio meet. They dance to the music of Chekhov's barrel organ2. They fall in love, even after the Irish beat cop shows up and forbids such street frolicking. He also threatens to arrest Mio for being a smart-aleck.

Judge Gaunt (Edward Ellis (1870-1952)) is wandering about the town. His conscience bothers him about the Romagna case: was he misled by false evidence? Is his life of judicial rectitude a lie? He has lost his reason.

Eventually, all the principals connect and rehash the case. Judge Gaunt is finally convinced of the truth, but to whom does it really matter? The police gently take him home, because he is a public figure. Trock Estrella and his trigger-happy henchmen are killing off witnesses. Who will survive? And what role will the barrel organ play in the exciting ending? Watch and find out. Oh, and get a glimpse into the real 1930s.

1This is where the title comes from. There is also a town called Winterset in Iowa. It got its name from a disgruntled surveying team in the summer of 1849. After an unseasonable cold snap, they decided the town didn't deserve the name 'Summerset'. John Wayne was born there, and The Bridges of Madison County was filmed there. There is no indication that Maxwell Anderson was in any way connected to Winterset, Iowa.2It's a Chekhov's barrel organ because, like Chekhov's gun, it is there to be used later in the story.