Finding Hutchins Hapgood - Sex, Anarchists, and Hippies in the Archives Content from the guide to life, the universe and everything 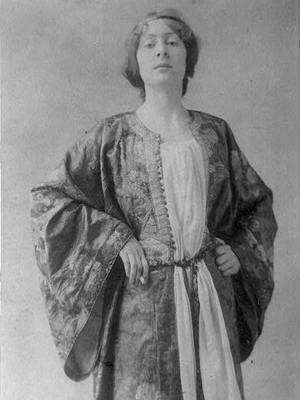 Armchair historians, rejoice: we have the Internet. Instead of spending time, money, and effort on travel and research in musty old libraries, we can now do our snooping from the comforts of home, using only our wits and fingers. Thanks to sites such as www.archive.org, Google Books, and The Gutenberg Project, a rich lode of primary source material is available to us. Together with our favourite go-to look-up site – say, the Edited Guide – and other reliable sources, such as the Library of Congress1, we can surf our way from question to answer. As usual, though, the old dictum 'Garbage In, Garbage Out' still applies: you have to ask the right questions. And you have to know what you're looking at.

Let's use our skill set to follow our curiosity where it leads. On this journey, we'll find out a lot about an unusual US family called the Hapgoods. Our journey begins in 1902, in a rather surprising place: Hester Street in New York City.

What Is This Man Doing Here?

Our investigation starts, oddly, with an announcement by the Gutenberg Project: as part of its Smooth Reading Project, it invites people to help proofread newly-scanned books. These books are in the public domain, and they are old. But they might be new to us. A friend recommends that we read a book about the Eastern European Jewish community in New York City, an illustrated work called The Spirit of the Ghetto. Questions come to mind – right on the front page. Who is this author, anyway?

'Hutchins Hapgood' does not look like a Jewish name to us – it's not Sephardic or Ashkenazic, and it doesn't look like the translation of anything we've ever run across. In fact, the author of this book isn't Jewish, he says so in the introduction. So what is he doing writing The Spirit of the Ghetto? This book appeared in 1902. It describes life among the Eastern European Jewish immigrants of New York City – and it does this with sympathy, insight, and a deep understanding of the cultural, religious, and political issues involved. This writer obviously has first-hand knowledge of these people. He even describes their homes, because he's visited them. Our curiosity is piqued. Who was Hutchins Hapgood, besides a reporter, and why was he so interested in all things Yiddish? How could he describe Yiddish theatre and Yiddish literature so well? Where did he learn the language? Inquiring minds want to know. NOW.

Let's read the book first, to see what our journalist thinks of the Jews in New York. He likes them. He admires their scholarship. He points out how many amazingly clever people from Russia live around Canal and Hester Streets. He's obviously been in on the conversations. He talks about the artists, including Jacob Epstein, who illustrated his book (beautifully). Okay, but what are his opinions?

Hapgood seems scornful of Socialists. Hm, that's odd: he's pretty progressive, why doesn't he like the Socialists? Oh, because they're too doctrinaire. His sympathy is entirely with the Anarchists.

Contrary to the general impression of the character of these people, in which bombs play a large part, the Anarchists of the Ghetto are a gentle and idealistic body of men.
– The Spirit of the Ghetto, p.190.

Lest this sound strange to us, let us remember that 'anarchist' did for the nervous system in 1902 what 'Al Qaeda' does today – evoked pictures of explosions, fire, and emergency services. But Hapgood's Anarchists were gentle idealists. Aha, let's go searching for Hutchins Hapgood. We think we know where to find him now.

Let's try looking in the Anarchist Encyclopedia, which is a website that is obviously a labour of love. Its subtitle includes the phrase 'saints and sinners', so beware – some of this info may curl your hair. Here he is: Hutchins Hapgood (1869-1944), American anarchist, journalist.

From this and other sources, we learn that Hapgood was the son of a Chicago businessman who lost his first business in the Great Fire of Chicago in 1871. Charles Hapgood (remember that name) was an agnostic, a hard worker, a good father, and a very moral man. (Keep that in mind, too.) He sent his sons to his alma mater, Harvard. The oldest son, Norman, became a journalist. Hutchins got a B.A. degree, took two years off to study at Berlin and Freiburg (aha! That's where he learned German, and possibly Yiddish!), and then got a master's degree. Then he went to work as a journalist, too. Hutchins Hapgood learned muckraking journalist techniques from no less an expert than Lincoln Steffens (a famous crusading editor).

What's that, you say? What's a muckraker? They were the forerunners of today's investigative journalists. They dug up the dirt – in the slang of that day, they 'raked the muck'. Journalists like Upton Sinclair. who went undercover in the meatpacking plants of Chicago, could make the government sit up and take notice. Theodore Roosevelt had to send his most trusted people to investigate after everyone started reading Sinclair's The Jungle. It was about what went on in slaughterhouses, and it made everyone sick. The commission said they could verify the whole horrible story, except for the part where Sinclair claimed a worker got lost in the plant and ended up in the lard. That one they weren't sure about.

Laws got passed because of muckrakers. Opinions changed. It was an important profession. So that's why Hutchins Hapgood was in Hester Street, talking to Russian Jewish anarchists. He had a predisposition toward new social ideas, and he wanted to make a difference. And, if you read the book, you'll notice that he knew his languages, went to the theatre, read the books (no small feat, Yiddish is written in Hebrew letters), and drank, probably, enough glezlach tay2 to float the Lusitania. Dedicated man.

If you read on, though, you'll find out something even more startling about Hutchins Hapgood – something that will make you really nosy.

What is this about Anarchists and free love? (Well, the price is right.)

Hutchins Hapgood and his wife, the novelist and playwright Neith Boyce, had an 'open marriage'. For the naïve among us, that meant they both fooled around, but it was okay with both partners. What Neith wasn't so happy about, apparently, was that Hutchins was nosy about who she slept with, and wanted the details.

Okay, but what does that have to do with Anarchists? Simple, really. Anarchists were utopian dreamers. They were busy re-imagining human relations – and this very definitely included gender relations. No Women's Studies department should be without an expert on Anarchists of the 1890s and early 1900s. These people were experimental. Think of Dušan Makavejev's extraordinary 1971 film WR: Mysteries of the Organism, which is well worth a view, even if you don't speak Serbian. It concerns Wilhelm Reich, orgone, sex, and Communism, and is a delight. Politics and, er, sexual politics – that's what we're talking about. At some point, all this fooling around involved perhaps the most famous anarchist of them all, Emma Goldman.

From our researches, we glean that Hapgood and his friends not only slept around a lot, but they talked about it at length. This seems to have been part of the process of using sexual experimentation as a political tool. From all this writing, including Hapgood's book about his lover, called (what else?) An Anarchist Woman, we find out more than perhaps we wanted to about Emma Goldman's intimate life, like her pet names for certain body parts.

Now, you ask, what is that to us, other than an odd footnote to history? Well, in a way, it might explain why the Red Scare in the US also involved the persecution of sexual minorities. But the radical politics of the later 20th Century was also tied to the anarchists – and the Hapgoods had something to do with it.

Charles Hutchins Hapgood and the Hippies – a Case of Red Diaper Baby?

In 1953, Hutchins Hapgood and his wife wrote a book called Hapgood: An American Family, in which they used the Hapgood family as an example of the North American experience, starting in 1648 and ending in 1917. But the Hapgood story did not end there. One of Hutchins' and Neith's children was Charles Hutchins Hapgood, who was born in 1904. Keep in mind that this son must have grown up surrounded by Anarchists practising free love. In the 1960s, radical activists who had been raised by Socialists, Communists, or Anarchists were often referred to as 'Red Diaper Babies', because they had learned this kind of thinking at an early age. In a way, Hapgood could be called a Red Diaper Baby. He came by his opinions honestly.

Charles, too, went to Harvard, like his father and the grandfather for whom he was named. During World War II, he served in the intelligence agency known as COI, which became the OSS, and later the CIA. After the war, he became a college professor. This Hapgood was perhaps the best-credentialed exponent of the Polar Shift Theory. He also firmly believed that there was a lost, ancient civilisation under the ice of Antarctica. Depending on your point of view, he was either an incredible visionary or a tinfoil-hat crank of the first water.

Hapgood wasn't only interested in polar shifts. The professor had a strong interest in parapsychology, as well, as is pointed out in the Yale Collection of his papers. Hapgood spent a lot of time with Elwood Babbitt, a Massachusetts farmer who had a lot in common with Edgar Cayce. Like Cayce, Babbitt was a trance medium. Babbitt channeled a lot of discarnate people, like Jesus and Vishnu. He had a lot to say when he was asleep. Hapgood was interested.

Babbitt's channelings are available on the Internet. We leave you to find them through the medium of Youtube. But what does this have to do with hippies? As we might expect, since Elwood Babbitt was active in the 1960s, the hippie movement got interested in him, too. One group in particular, the Brotherhood of the Spirit, used Babbitt as their 'spiritual advisor'. The group, led by Michael Metellica, was very successful at one time, and sold a lot of rock albums3. The University of Massachusetts has a picture collection you might enjoy.

From Anarchists to hippies, through the medium of degrees of separation. Influences, connections, friendships. We can gain a lot from these connections, and all without moving from in front of our computers.

What are you waiting for? Start clicking, and enjoy the ride.

Image supplied by the Library of Congress.

1Letting your fingers do the walking beats driving to Culpeper, Virginia, USA.2This means 'glasses of tea'. Russian tea came in glass cups, and was drunk with lemon, whenever possible. Don't knock it – this beverage, and not vodka, fueled a revolution.3This group is not to be confused with Metallica. Metellica was just the man's name, and they didn't play heavy metal.