Knights, Horses and Fact-checking old Songs: the Tale of Sir Hamo Content from the guide to life, the universe and everything 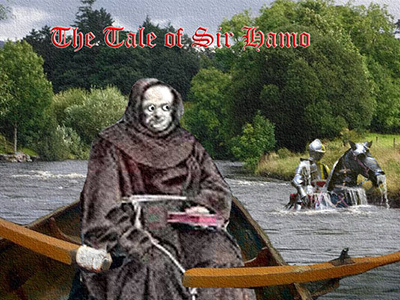 At Dunham once there lived a knight,
Sir Hamo was his name,
And when outnumbered in a fight
He swam his way to fame.

Surrounded near to Runcorn
He faced the cruel tide,
And lived to swim the Mersey
With his charger by his side!
- Medieval legend

Was this old song true? Who was Sir Hamo? What the heck was he doing in a river with his horse? First a little history.

Following the Battle of Hastings (1066), Hamo de Masci, one of William the Conqueror's buddies, was granted land in Cheshire by the new king. In 1072, Hamo (or Hamon) de Mascy was made Baron and went on to be a very influential character until his death around 1101. His family owned large areas of Cheshire and the north at one point in English history. In 1150 Birkenhead Priory was founded by his son, Hamon II de Mascy.

Monks set up the first 'Ferry 'Cross the Mersey' and assisted travellers crossing the river to and from Lancashire into Cheshire for centuries until the Dissolution of Monasteries in 1538. Hamo, I or II, were never historically recorded as attempting to swim the Mersey river. Has the origin of the ferry been corrupted or lost in history? Where did the idea of a knight swimming the river come from? Another Norman myth to prove their superiority over the defeated British?

Jump forward to 1715, Hamo's descendent, William Massey (anglicised version of de Masci), the last of his bloodline, was fighting at the Battle of Preston during the Jacobite Rebellion. A staunch Catholic and supporter to the Pretender to the English Crown, Prince Charles Edward Stuart1, Massey found himself surrounded by the enemy near to Runcorn in Lancashire, and his only escape route was into the River Mersey. William is traditionally reported to have been in full armour and riding a draft, or heavy, war horse (presumably also in full armour). Faced with the choice of death by the enemy or drowning, William (aged 60) plunged into the cold waters and swam with his horse towards freedom or death. Some three miles later, he and the warhorse emerged on the Cheshire side on the Wirral Peninsula. William rode the exhausted beast to his family estate at Puddington Hall. The horse sadly took his last breath as it reached the stables and died. William was captured at Puddington and imprisoned in Chester Castle where he too died soon after, suffering a reportedly 'lingering death'. William bequeathed his estates to his godson Thomas Stanley, who took the name Massey. The names Stanley and Massey still feature in many Wirral place names, and the Priory is now a National Heritage Site and visitor attraction.

So there is truth in some of the old songs and legends, we just need to do a little research to uncover the actual facts.

Note: Mersey ferries are no longer run by monks.