The Baltimore Oriole: Bright Aristocrat of the Bushes Content from the guide to life, the universe and everything 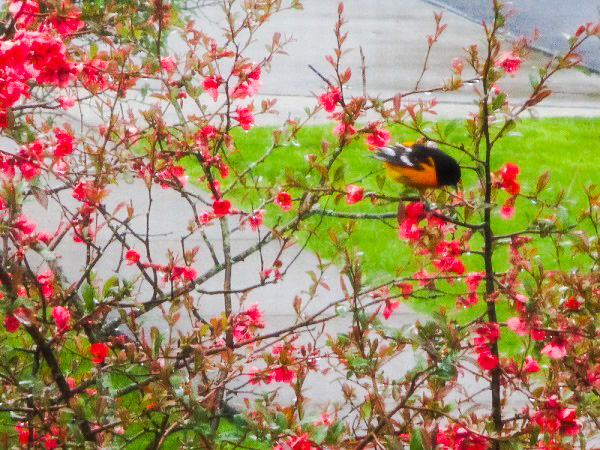 The Baltimore Oriole, of course. Icterus galbula is a passerine1 icterid2 blackbird that can be found through eastern and central North America. Its orange plumage and loud, cheerful song brighten life in spring and summer gardens. Here are a few facts about this colourful avian.

Sorting Out the Nomenclature 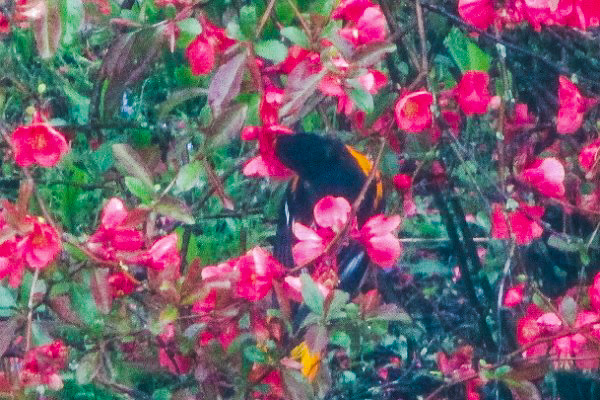 North American birds got named by European settlers, mostly in analogy to the birds they already knew in Europe. When they saw a passerine bird that was bright orange and black, wove a hanging basket of a nest in a tall tree, and had a long bill, they called it an oriole. 'Oriole' comes from Latin aureolus, meaning 'golden'.

North Americans tend to assume that Baltimore Orioles are so-named because they're common in Maryland, where the city of Baltimore is located. Baltimore's major-league baseball team is named the Baltimore Orioles, with suitable mascot3. The birds are common in Maryland, of course, but they don't get their name from the city. Their bright orange and black coats share a colour scheme with the coat of arms of a human Baltimore –   Lord Baltimore, the original proprietor of the colony. You can find Lord Baltimore's orioles west of the Mississippi River or north of the US border with Canada. 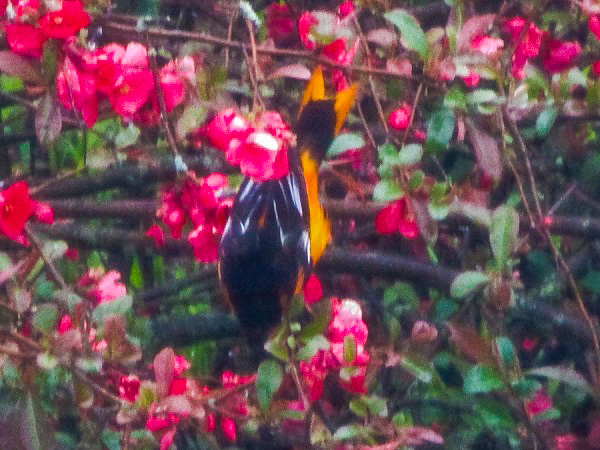 Baltimore Orioles eat insects, berries, and nectar. They will catch bugs in mid-air. They will visit nectar feeders and bushes with nectar flowers. They will get really creative, posture-wise, in getting to that nectar (see pictures). They love bright-coloured berries, but will ignore green ones. They like grape jelly and fresh oranges. Humans who know this often leave some out to attract the bright birds.

Orioles have an interesting way of eating juicy fruit. It's called gaping. They stab the fruit with their closed beaks. Then they open them and lap up the juice with their tongues. They're efficient eaters.

Mating is a big song-and-dance for Baltimore Orioles. The male sings loudly and aggressively to scare off the competition. Then he dances in front of the female, bowing his head and spreading his wings and tail. Once the disco routine works, he gets to move in with her. Sometimes he even helps a bit with the nest-building, but it's mostly the female who's the architect.

The female oriole lays 4-5 eggs and hatches them herself. When they hatch in about two weeks, the male and female both feed the young for another two weeks until they're ready to leave the nest. Orioles mate for life, but have been known to fool around.

In the Great Plains, Baltimore Orioles tend to hybridise with the Bullock's Oriole. For a while, they were considered to be the same species. Genetic testing in the 1990s, however, resulted in their reclassification into separate species. Baltimore orioles have a black head and white wingbars. Bullock's oriole has an orange head with a black line across its eye that looks like it was put there by an expert make-up artist. Bullock's oriole also has a larger white patch on its wings. See these images to compare.

1Passerine means its feet are designed for clinging to branches. It does this a lot while drinking nectar.2This refers to yellow colouration.3Baltimore sport fans must like birds. The American football team (NFL) is called the Baltimore Ravens. The football team is so-named because of Baltimore's association with 'Raven' poet Edgar Allan Poe.