The Vienna Mountain Spring Pipeline - Water for the City Content from the guide to life, the universe and everything 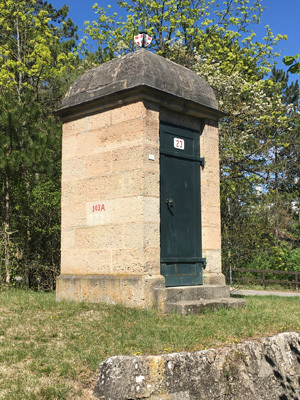 When you are taking a walk south of Vienna in Austria you may come across one of many strange little 'houses' of about the size of a telephone box but solid and with a locked iron door. They may stand in the middle of a field or at the edge of a forest. These little buildings are in fact over 100 years old. They are access towers and only a small visible part of a large underground structure and masterwork of 19th Century engineering: the Wiener Hochquellen Wasserleitung – the Vienna mountain spring pipeline.

In the 19th Century the water supply in Vienna was anything but optimal. There were too few public fountains with good drinking water and many people had to take water from their own dirty wells. In the 1830s it was decided that a new water supply for the city had to be found so the growing population as well as various factories had enough clean water (you have to remember that at this time Vienna was still the capital of a large empire). After a long planning phase a pipeline was built from the mountains in the south to the city. It was finished in 1873, just in time for the World Fair in Vienna.

The pipe is all in all about 95 km long (that's 59 miles) and brings water from a few different springs in the Alps to Vienna without the use of any pumps. The water today even creates power in a few smaller power stations (creating enough power for a large town). Quite a few tunnels had to be built where the pipe leads through the mountains, the longest being about 300m long. It also crosses valleys. The longest aqueduct is about 1km long, but there are also quite a few smaller ones.

Today this pipe still provides about 50% of the water supply of Vienna, the other half coming from a second pipe running north of the mountains (built in the early 20th Century). Only about 5% each year come from subterranean water. The water coming through the pipes from the mountains is so clear that it does not have to be filtered. This means that Vienna does not only have better water than many other large cities but also has better water than many villages in its vicinity that have to use subterranean supplies.

The Wasserleitungsmuseum Kaiserbrunn, Lower Austria, shows visitors more about the history and present-day facts of the pipeline.

Two hiking trails run along (or above) the pipeline: One leading through the mountains from the springs in Kaiserbrunn to the town Gloggnitz and the second leading through the vineyards from Bad Vöslau to Mödling. Both walks are not too difficult but take a few hours. It is of course also possible to take shorter walks at many places along the pipeline.