Little Grebes Content from the guide to life, the universe and everything 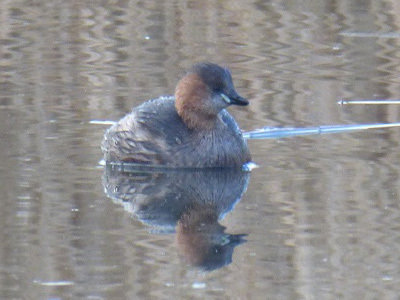 The Little Grebe (Tachybaptus ruficollis) is a small diving bird. It might look cute as it dives underwater then bobs up like a cork, and fluffs up its powderpuff-like feathers, but it is a keen hunter - its prey includes aquatic insects, small fish and newts.

Little Grebes can be found in Africa, Europe and South Asia. Some members of the species stay close to where they hatched, such as in the UK, while others migrate to warmer climes in winter (for example, birds from north of Scotland may travel south to France). They are classed as Least Concern on the International Union for Conservation of Nature’s Red List but overall the population has been decreasing in recent years - predators such as mink are a threat, as are hunting by humans and diseases such as bird flu. Conservation efforts aim to protect their existing habitats and create new ones - they favour shallow lakes or slow-flowing rivers.

Little Grebes build floating nests from aquatic plant material and the female lays up to six eggs. Both parents spend time incubating and the eggs hatch after about 20 days. The chicks are fed by their parents for about a month, until they learn to feed themselves. They can fly at about the age of 45 days - before then, they can swim, but also get around by riding on their parents' backs. The oldest Little Grebe known to the Royal Society for the Protection of Birds (RSPB) was 17 years old.

There are other birds with 'grebe' in their names, but they are not members of the Tachybaptus genus. For example, the Great Crested Grebe and Black Necked Grebe are examples of the Podiceps genus and the Hoary Headed Grebe is named Poliocephalus poliocephalus. However, all these birds are members of the Podicipedidae family. Their feet have three separate toes, unlike the webbed feet of dabbling ducks. However, their toes have lobes that flatten out and fold inwards as they paddle their feet backwards and forwards - this enables their movement through water, especially underwater, to be efficient and agile.