Sir Derek Bibby - Businessman, Philanthropist, Gardener Content from the guide to life, the universe and everything 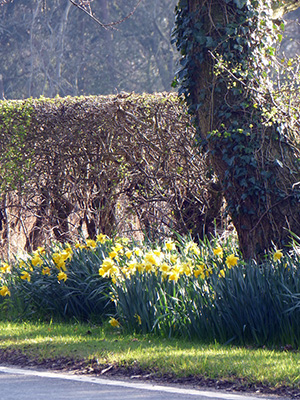 Each Spring, people who travel along Hadlow Road on the Wirral, UK, are treated to the spectacular sight of thousands of daffodils in bloom. The daffodils are there thanks to the dedication of one man - Sir Derek Bibby. Sir Derek was a businessman who supported his local community. Well-known in the local area, he achieved national infamy following his death by suicide. However, the work he did during his lifetime yielded a lasting and positive legacy. For the people who knew him, the daffodils are a reminder of his generosity, his down-to-earth nature, and his passion for gardening.

Derek Bibby was born in Hooton, Cheshire, on 29 June, 1922. He was sent to boarding school in Surrey when he was nine years old, before moving up to Rugby School in Warwickshire. In 1940, during the Second World War, he helped to defend the town of Rugby as a Corporal in the Rugby School Corps. He then went to Oxford University to study Economics and carry out military training - the course was condensed into one year so he had to work very hard, but passed all his exams in 1941. He did more military training at Alton Towers1 and became a Gun Position Officer for the 53rd Welsh Division of the Territorial Army. He took part in the Normandy Landings in June 1944. He returned to the UK after being wounded by shrapnel (and 'suffering from slight shock') when a mortar bomb went off during a battle near the Rhine in Germany. He was awarded the Military Cross medal in 1945.

At the age of just 23, Derek gained command of a troop ship transporting people and goods between Burma (now Myanmar) and India. While there, he encountered ships and staff of the Bibby Line shipping company, the family firm that had been founded in 1807 in Liverpool. When he was demobililsed from the army in 1946, he joined the Bibby Line alongside his father.

Derek's father was given the title 1st Baronet Bibby in 1959 in honour of his work as the Chairman of the Bibby Line. Sir Harold had run the company with caution, avoiding debt. Derek had taken over in 1950 and developed a more ambitious strategy, borrowing money to fund the expansion of the company so as to increase profits. In 1970 the Bibby Line won 'The Queen's Award for Industry'. In the 1980s the company began to diversify its portfolio. Bibby Financial Services Ltd (providing financial services) and Bibby Distribution Ltd (providing warehouses and road transport services) were founded in 1985. On the death of Sir Harold in 1986, he became the Second Baronet Sir Derek Bibby. In 1992, Sir Derek became Honorary President of the Bibby Line Group.

Derek Bibby married Christine Okell in 1961. Their wedding day made newspaper headlines when one of the guests slipped and fell, breaking his leg and having to be taken to hospital by ambulance. Christine and Derek went on to have a daughter and four sons. From Willaston Grange, their home on the Wirral, Derek supported good causes, most notably the Birkenhead Boys Club (which was for boys unable to afford to buy the Scout's uniform). He helped with fundraising, arranged for purpose-built premises to be constructed, and even taught the boys skills such as Judo. Christine also supported good causes and the local community - in the 1980s she managed part of Willaston Grange as a playschool for local children2 and as Lady Bibby she is known for taking part in charity events and fundraising efforts across Wirral and Cheshire.

In 1990, Sir Derek wrote some autobiographical sketches, including words of wisdom for succeeding in business and life in general, and they were published by Bibby Bros & Co (Management) Ltd in 1991 as a book entitled 'Glimpses'. 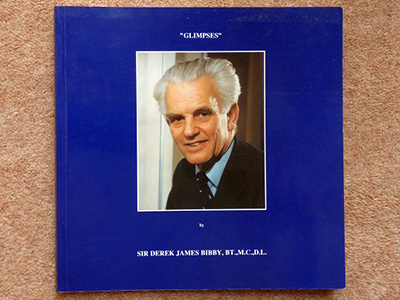 Sir Derek was a keen gardener - he attended meetings of the local Horticultural Society and often opened his garden to visitors. In the mid-1990s he decided to make a difference to the local area by planting daffodil bulbs in the grass verge of the road outside his house - over a number of years he planted hundreds, if not thousands, of bulbs so as to provide a bright yellow splash of colour each Spring.

In 2002, at the age of 80, Sir Derek made the newspaper headlines again, for an unfortunate reason. He had found out he was terminally ill with leukaemia and prostate cancer, and decided to end his own life at a time of his choosing. On 9 October that year, he had lunch with his daughter at home. While she walked their dog, Sir Derek went to the cellar. There, he used rat poison to generate a toxic gas in his home sauna. When his daughter returned to the house, she found the note he had written, which included a warning about the gas, and called the emergency services. The Fire Brigade attended the scene, equipped with protective clothing, but Sir Derek was not able to be resuscitated. Drama ensued when he was taken to the local hospital, as the toxic gas was still being produced on his body and clothes. The hospital had to follow the Chemical Incident Procedure, which included closing the Accident and Emergency Department for more than 12 hours - the Department had to be evacuated, and ambulances were diverted to hospitals elsewhere, after five members of hospital staff were overcome by the fumes.

The Bibby Line Group has continued to prosper since the days when Sir Derek was at the helm - his eldest son Michael became Managing Director in 2000 and the company still seeks opportunities to broaden its portfolio. The Birkenhead Youth Club is still open and has its hub at The Derek Bibby Centre. And the daffodils Sir Derek planted continue to provide pleasure to passers-by each Spring.

1Before it was a theme park.2Including this Researcher.