Hooton Park Aerodrome, Cheshire, UK Content from the guide to life, the universe and everything 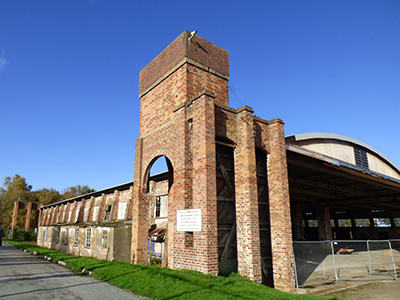 Hooton Park Aerodrome is now staffed by volunteers and occupies a quiet area just off the M53 Motorway, at the boundary between Cheshire and Merseyside in the UK. However, in much of the 20th Century it would have been noisy with the sound of aeroplanes and vehicles, and busy with people employed in the aviation industry.

The Aerodrome occupies land that was once part of the Hooton Hall Estate. Hooton Hall was built in the 1780s in Neo-Classical style, with Corinthian columns at the entrance. A clock tower and private chapel were also constructed. In 1849 a racecourse and polo field were created in the parkland. In 1875 the Manchester Ship Canal was cut through the land, so the owner, Richard Naylor, moved out of Hooton Hall and the racecourse was opened to the public.

It was during the Great War that aircraft first arrived in Hooton Park - Hooton Hall had been turned into a military training facility and hospital in 1914 and Royal Flying Corps pilots were stationed there between 1917 and 1919. Various buildings were constructed, including three Belfast Hangars1 to house their aircraft. After the War, Hooton Park became an aircraft manufacturing site2. The Liverpool and District Aero Club was founded there in 1928 and held events that were attended by notable people including aviator Amy Johnson and Edward VIII (then the Prince of Wales). Between 1930 and 1933 it was known as Liverpool Airport, even though it was on the opposite side of the River Mersey to Liverpool - the aerodrome north of the Mersey that went on to become Liverpool John Lennon Airport was officially opened in 1933. In 1935 Hooton Park became the headquarters of Martin Hearn Ltd, an aircraft repair company run by a former Flying Circus artiste.

The 610 (County of Chester) Squadron of the Auxiliary Air Force was formed at the aerodrome in 1936 - in 1939 they were equipped with Hawker Hurricanes and Supermarine Spitfires, amongst other aircraft, and went on to take part in the Battle of Britain. During the Second World War, some of the first British helicopters were constructed at Hooton Park by Martin Hearn Ltd. Hooton Park also served as an aircraft repair station, military accommodation and an aircraft landing base (aeroplanes returning from Dunkirk in 1940 landed there). The former racecourse grandstand and several privately-owned light aircraft that had been stored underneath it were destroyed in a fire in 1940. A fire station, another hangar and new runways were constructed in 1941-42. A Radar training school was established there from 1942.

After the War a small amount of aircraft repair continued to take place at Hooton Park, but Martin Hearn Ltd also turned to repairing buses, maintaining armoured cars, and making gliders (the company changed its name to Aero-Engineering and Marine (Merseyside) in 1947 when Martin Hearn left, and it closed in the 1950s). Hooton Park once again became a base for (now Royal) Auxiliary Air Force squadrons from 1946 until 1957 when the squadrons were disbanded.

Although the site was closed to air traffic, the runway was used for high-speed vehicle testing and the land was used to host the Cheshire Show annual agricultural fair for a number of years. Vauxhall Motors acquired the land and built a car factory that started production in 19623. In 1986 some of the factory workers arranged a 'Transport Extravaganza' festival for charity; it was successful so further events took place. The workers also arranged for the Belfast Hangars and other structures4 to become listed buildings. The Griffin Trust charity (named after the griffin logo on Vauxhall cars) was formally founded in 1990 to oversee the fundraising events, watch over the buildings and work on restoring classic vehicles.

Vauxhall Motors proposed to demolish the hangars in 1998, but the Griffin Trust campaigned to save the historic structures. The campaign was successful - Vauxhall Motors provided funding to establish the Hooton Park Trust non-profit company and they transferred ownership of the site to the Trust in the year 2000. The Trust was put in charge of managing the restoration of the listed buildings, exploiting commercial fundraising opportunities and preserving Hooton Park's heritage for the future.

The Aerodrome is mainly open only to the volunteers of the Hooton Park Trust and the Griffin Trust who are working on the restoration of the site and its contents (including classic cars, motorcycles and vans). It is also open to people who pay a fee to store their vintage vehicles there. However, Hooton Park Trust holds occasional open days for visitors - special events take place throughout the year, including heritage weekends, craft fairs and guided tours. The guided tours include time in the museum rooms and restoration workshops5. If you are able and willing to go down dodgy steps into the dark and dank air raid shelter when one of the volunteers operates the siren, there is an audio-visual display evoking the experience of an air raid. Or you can sit in the main building and look at a digital recreation of what it would have been like to fly over Hooton Park Aerodrome.

1These were large sheds with lattices of wood (known as 'Belfast Trusses') supporting the roofs.2Hooton Hall became derelict and was demolished between 1925 and 1932. Parts of it were reused in buildings on the Wirral and also in Portmeirion in Wales.3 The factory became known as 'The Home of the Vauxhall Astra' and production continued into the 21st Century.4Including one named 'Building 42'.5Which are all wheelchair-accessible.