Portmeirion, Cardigan Bay, Wales Content from the guide to life, the universe and everything 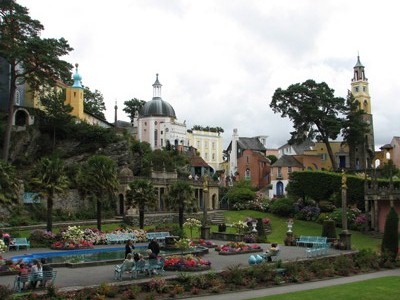 Sir Clough Williams-Ellis was an eminent architect; also arguably barking mad or at least very eccentric. The justification for this point of view comes from an examination of his masterpiece, the village of Portmeirion in Wales, which he built in two phases between 1926 - 1939 and 1954 - 1972; the break being occasioned by his wartime service.

Portmeirion is actually a very fine piece of architecture, combining as it does striking looks, variation within a unified theme, and a surprising sensitivity to the surrounding landscape. It is also odd. Really profoundly odd. For example, it is executed throughout in the Italianate style, not exactly all the rage in Cardigan Bay, and it has a life-size concrete ship moored at the jetty. Really. Uncannily, the warmth of the Gulf stream means that subtropical vegetation is also at home there, giving a real impression that you have stepped into another country.

Some of the buildings were designed by Sir Clough; others were painstakingly dismantled, shipped from many locations and reassembled there. For example, the old Bristol Colonnade now stands in front of the domed Pantheon in Portmeirion.

Happily this absurdity has made the place famous both as a visitor attraction (not least to buy cut-price seconds from the world-renowned Portmeirion pottery) and as a setting for films and television shows.

Which brings us to The Prisoner, a cult British television series of the 1960s starring Patrick McGoohan and just about anybody who was anybody, including Leo McKern and others. It is from this show that the phrase quoted at the top of this article is taken - and it has resonances for the whole town, as Clough Williams-Ellis was also every inch an 'individual'. The Prisoner is so surreal as to demand a whole article in its own right, but suffice it to say that years after it was last on TV people can still remember the registration number of the Daimler Princess which was used in the abduction of No 6 in the title sequence, to say nothing of his Lotus 7.

The Village now acts as a hotel, with the rooms and suites distributed round the various buildings. It's expensive, but reputedly excellent. A picnic on the beach is a good option for the less extravagant.

A word of warning; the beach is lovely, with miles of flat, golden sands. Don't be tempted. Due to the fact that it's flat the tide comes in incredibly quickly, and if you are unwise enough to wander round the headland you can be cut off before you realise what's going on - and some of it is quicksand, at that! So keep close to the coast and within sight of the village, and you'll be fine.

When you visit Portmeirion, you should take time to savour the place. Once you have surmounted your natural desire to quote lines from The Prisoner, and have stopped looking for Mini-Mokes, the place really is quite lovely. But small. Really surprisingly small. It's much bigger on the telly...