Whittier, Alaska, USA: The Town Under One Roof Content from the guide to life, the universe and everything

Geography and weather can isolate people on Planet Earth. When the elements are particularly hostile, the local humans may tend to huddle for mutual protection. Which might be part of the explanation for why Whittler, Alaska's 220 inhabitants live really close to one another. Some might say, however, that the fact that almost of all of them live in the same building is taking togetherness a bit far. As usual, there's a story behind it all.

Why Anyone Lives in Whittier, Alaska

Whittier is named after a nearby glacier, which in turn was named for John Greenleaf Whittier, who was a popular poet once upon a time. Alaska, of course, was bought by the United States from Russia. The reasons why two countries were trading in real estate they didn't live on, and ignoring the people who did – including the Chugach people of Prince William Sound, where Whittier is located – is one of those imponderables with which human history is rife. Nonetheless, Alaska, land of the polar bear and the Iditarod, became a US state in 1959. Whittier is located 58 miles (93 km) southeast of Anchorage.

The area around Whittier was originally used by the Chugach as part of a portage route, where canoes and kayaks were hauled between bodies of water. Later, explorers and gold miners infested the region. During the Cold War, the US military constructed a port and a petroleum products terminal. These days, cruise ships bring tourists to gawk at the glacier in climate-controlled comfort in between buffet feedings.

Where Did the Big Building Come From?

In the 1950s, the US military erected two buildings – the largest in Alaska at the time. One, the 14-storey Hodge Building, housed civil and military employees and their families. The other, the Buckner Building, was a composite housing structure for troops. General Simon Buckner had originally picked the site for the defence of Alaska during the Second World War because the near-constant cloud cover in Whittier made air strikes fairly unlikely.

In 1964, the world's second-most-massive earthquake (9.2) unleashed a 31-metre tsunami that killed 13 people in Whittier. Over $10m worth of damage was done, although surprisingly little of it affected either building. Instead, political change caused the military to move on, leaving the buildings to the townspeople. The Buckner Building was abandoned and fell into disrepair.

The Hodge Building, renamed Begich Towers1, has been repurposed to house most of the population of Whittier, along with the post office, the general store, a hospital, the mayor's office, the Methodist church2, the police department, a grocery, a recreation area, and a pool.

While most citizens of Whittier live in the Begich Towers, also called BTI (for Begich Towers Incorporated), a few, such as the mayor and resident artist/notary public Brenda Tolman3, live in Whittier's other residential building, a small apartment complex down the road. Their reason? Privacy. Otherwise, the neighbours show up at all hours in their stockinged feet.

In and Out in All Weathers

In Whittier, Alaska, nobody has to go outside if they don't want to. This is good, because the weather in Whittier is terrible. The average annual rainfall is 197.8 inches (5,024.12 mm). Precipitation is divided between rain (six months of the year) and snow (six months of the year), making Whittier the wettest town in the United States. The approximately 22 feet (6-7 metres) of snowfall is blown about by winds up to 80 mph (129 km/h).

People who do need to go somewhere – such as shopping in Anchorage – have to face the problem of getting out of town. This is harder than it sounds. The road is connected to the Seward Highway by the Anton Anderson Memorial Tunnel, which is 13,300 ft (4,100 m) long. This single-lane tunnel is shared by motorists and a railway. The whole thing is run by computer, but the bottom line is that you can only drive it in either direction once an hour. And if you're later than 10.30pm getting home? Sleep in your car. Whittier residents have t-shirts that say, 'POW: Prisoner of Whittier'.

Other options for getting in and out of Whittier include the deepwater port – choose from the Princess Cruise line or the Alaska Marine Highway, a state-run ferry service – and the one-lane runway at Whittier Airport. There is also a seaplane dock.

Daniel Blair, Whittier's mayor, enthuses over Whittier as 'by far the most visited gateway to the mesmerizing wilderness of Prince William Sound.' He also reminds potential tourists that '[t]he mountains surrounding Whittier are host to the shy mountain goat, all manner of weasels, whistling marmots, bear, and the occasional coyote.' For a town with only two dwellings, Whittier attracts a remarkable 700,000 visitors a year. It is possible that some come to see the weasels, but they are more likely to be admiring the scenery, going kayaking, drinking in the midsummer sunlight, or hiking the trails. As the mayor warns, 'Be careful, gravity is no joke!'

Business Insider has a good photo gallery showing Whittier, the Begich Towers, its bed-and-breakfast, and the tunnel. 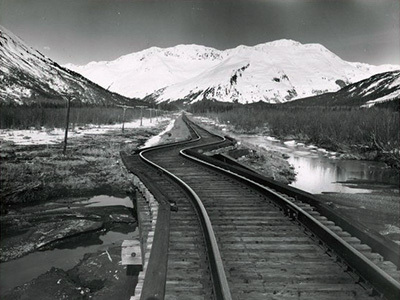 Image courtesy of US National Archives

1Congressman Nick Begich was one of four men who disappeared without trace during a Cessna flight from Anchorage to Juneau, Alaska.2There is also a Samoan congregation that meets in the basement.3See the CNN Interview with Ms Tolman for her colourful views on life in Whittier.