Outwitting History: How Aaron Lansky Rescued Yiddish Literature Content from the guide to life, the universe and everything 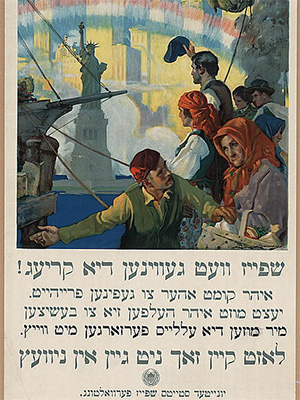 In 1991, UNESCO declared Yiddish an endangered language. How do you save an endangered language? You can teach it. You can learn to speak it. You can collect testimony from its native speakers. If it's a literary language, like Yiddish, you can preserve its books. Aaron Lansky had already begun doing that. Today, the National Yiddish Book Center in Amherst, Massachusetts (USA) houses an impressive collection of Yiddish works from around the world. It offers educational programs. It collects oral histories: both oral histories and books are freely accessible online. But in 1980, when 24-year-old graduate student Aaron Lansky founded it, the project didn't seem so grand. In fact, it took a lot of work to convince people it needed doing at all.

The Language and Its History

A language is a dialect with an army and a navy.
- Saying popularised by Max Weinreich

Yiddish is a fusion language compounded of Middle High German from the Rhineland, Hebrew, and any other language it has encountered along the way. Much like English (another fusion language), Yiddish is a great borrower of words, a flexible means of expression, and a living record of human communication over the last millennium. Unlike English, Yiddish is properly written from right to left, using the Hebrew alphabet (see example above). This means that, while German speakers may understand a great deal of spoken Yiddish, they need to learn another alphabet to read it.

For six centuries there has been a Jewish Krakow. By this evening those six centuries will be a rumor. They never happened.
- Amon Goeth in Schindler's List

In 1939, on the eve of the Second World War, Yiddish was a widespread language in Europe, spoken from Central Asia to the Atlantic coast. By 1945, the language was threatened with extinction: most of the six million murder victims who died at the hands of the Nazis were Yiddish speakers. The rest were now scattered overseas, forced to learn new languages to speak with their neighbours.

The newly-formed State of Israel had absolutely no interest in encouraging Yiddish, now regarded as the language of exile. But without this language and its writings, hundreds of years of history would be lost. No one would be able to share the thoughts and experiences of people who had lived, worked, invented and dreamed in communities now gone, ploughed under by invading armies. If Yiddish died, their stories would die with it – more victims of the Holocaust. Unfortunately, the children and grandchildren of the survivors didn't usually speak Yiddish and couldn't read it at all. It was time to revive interest, before this legacy was lost forever.

It's true: Yiddish was despised, disparaged, and dismissed because it was different; because the people who spoke it lived on the outside for a thousand years; because when Christian soldiers were marching as to war, they stayed home; because they didn't want to talk about weapons and tactics; because they valued peace, decency, and social justice not as abstract values but as the strategy for their own survival. All this was part and parcel of the Yiddish language, and the longer Jews wrote in it, the more implicitly radical and challenging their literature became. No wonder it was despised by gentiles and emancipated Jews; and no wonder so many young people of my generation, having grown up in a world gone amok, were suddenly so ready to embrace it anew.
- Outwitting History, p. 164

Aaron Lansky didn't grow up speaking Yiddish. He learned it at university in the 1970s, when it was not at all fashionable to do so. Once he'd learned the basics, he needed more reading matter, and found, unsurprisingly, that there weren't a lot of books in Yiddish around.

Worse, though, Lansky found that the books that still existed were in imminent danger of disappearing forever. They were stored in the cellars of buildings, the organisations that ran Yiddish lending libraries long since disbanded, their members all dead or in retirement homes. Other books were being thrown out by young people cleaning out apartments once their grandparents had passed away. Still other collections were being guarded, unhappily, under lock and key: Orthodox communities could read Yiddish, but they disapproved of the secular (and often radical) contents of these books. They wouldn't destroy them out of respect for the printed word, but they didn't want anyone else to read them.

Collecting all these books was going to be a challenge, and Lansky had next to no money. He did have enthusiastic friends and a growing number of contacts among older, Yiddish-speaking, educated Jews. Lansky's team organised these volunteers into zamler, collectors, and travelled from place to place in rented trucks (which often malfunctioned1), rescuing books from cellars and dumpsters. They divided their own team into driver, shleppers (fetch-and-carry types), and the Designated Eater. The Designated Eater had to sit and listen to personal stories while consuming vast quantities of pickled herring, lox and bagels, cakes, and whatever else the generous older generation was forcing upon them. They packed emergency liniment and antacids.

Outwitting History is the story of their adventures, and it reads like a comedy, thriller and spy novel all in one. The stories are vivid. Some are touching. Others are laugh-out-loud funny, such as Lansky's account of being roped into giving his lecture at a Borscht Belt2 resort and being critiqued on his 'stand-up routine'. (He declined the offer of further engagements.)

The book recounts the discovery of a unique book: the only copy in the world of a dictionary destroyed by Stalin's police. A cousin of the author had taken his copy out of the country mere hours before the presses were smashed. Another gift was the Yiddish typewriter once owned by author Lamed Shapiro. 'For us, it was as though we had just been handed Shakespeare's pen,' writes Lansky.

Outwitting History takes the reader to unusual places. They ventured behind the crumbling Iron Curtain as far as Vilna (Vilnius), once the 'Jerusalem of Lithuania', now in need of all the Yiddish books the volunteers could deliver – as long as a Yiddish-speaking gangster would supply them with enough petrol to get out of the country before their transit visa expired. It's an exciting book about books: Outwitting History is full of laughter, tears, and insights into the lessons learned while saving a significant part of our human legacy.

Interested in learning Yiddish? You could take a course from the National Yiddish Book Center. In addition to residential courses, they have online offerings.

Once you've learned the basics, you can find books in Yiddish online at the Book Center's Online Collection, digitised on archive.org. Yiddish authors are also available in translation courtesy of archive.org and Project Gutenberg.

Image supplied by the Library of Congress

1One time, Lansky, his co-worker and an elderly lady were in one with non-functional windscreen wipers. It started raining. They were on a busy bridge in Manhattan. They strung a length of rope across the windscreen, and the driver and passenger held their arms out the windows and pulled up and down.2The Borscht Belt is an area in the Catskill Mountains of New York whose resorts traditionally cater to older Jewish residents of New York City and environs. A bastion of Yiddish-language humour, the Borscht Belt isn't exactly known as an intellectual venue.