Work Study - a Management Tool Content from the guide to life, the universe and everything 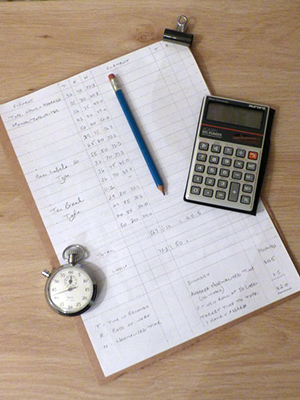 Work Study was a popular management tool in the UK during the 1950s to the 1970s and can be divided into two parts: 'Work Measurement' and 'Method Study'. In the USA it was known as Time and Motion Study: 'Time' is attributed to the work of Frederick Winslow Taylor, an Industrial Engineer, and 'Motion' was developed by Frank Bunker Gilbreth, Industrial Engineer and efficiency expert, and his wife Lillian Moller Gilbreth, an Industrial Psychologist.

Work Study was applied to repetitive tasks, such as those carried out by factory workers or office typists. The only equipment a Work Study Analyst needed was a stopwatch, a pencil (the fastest, non-smudging way of writing), a clipboard and a supply of suitably lined paper together with a slide rule (later replaced by a small calculator).

In this part, repetitive tasks were timed by an Analyst using a stopwatch. When an identifiable part of the task (an 'element') was complete, the reset button was depressed, the hand on the watch flew back to zero, the time in seconds was recorded, and timing of the next element began. For each element's recorded time, the Analyst added a 'rating' of the estimated speed of the operator's work. The rating scale most commonly used was the 60/80 scale1, with 60 being the normal non-incentive speed based on the benchmark training tasks of walking at 3mph or dealing a pack of 52 playing cards into four piles in 30 seconds. The 80 rating was based on an incentive rate of walking at 4mph or dealing the cards in 22.5 seconds. The basic training of novice Work Study Analysts was assisted by watching films of pre-rated tasks. Of course speeds for rating varied and tasks were therefore rated in steps below, between and above the 60/80 range. In practice Work Study Analysts were reasonably accurate between speeds of 50 to 90, but lower than 50 the tendency was to rate too high, and above 90 the tendency was to rate too low.

When a Work Measurement study was complete, the recorded times had to be 'normalised', ie by multiplying the time taken by the rating recorded and dividing by 60. The normalised times were added, with variations for quantity (eg collecting another batch of work might only happen once in every 100 units produced) and a relaxation allowance was added to cover tea breaks or personal needs.

The benefit to Management of Work Measurement was that by incentivising the work the level of production went up. For example if the employee reached the 80 rating level, this was an increase of 33% for which a 20% bonus would be earned. In a production line, the timings would be used to calculate the optimum staffing levels at each stage of the process. The bonus for improved output would be paid on a group basis rather than individually.

As an example, imagine a worker whose job it is to assemble a unit, enclose it in a plastic casing, box the finished product in sixes and place the box on a moving conveyor belt. The resultant Work Measurement target sheet would look like this:

As with any type of assessed measurement, there arose disputes over the accuracy of the set targets. To resolve the disputes, an Analyst would time an operator for a whole working day, carrying out a 'production study' to prove the accuracy or otherwise of the target. These production studies were not popular with Analysts, requiring the Analyst to stand all day while in fear of the dreaded writer's cramp.

To try to eliminate the possible variation in Analyst ratings, studies were made of various hand movements used in performing any task, and a normalised time unit was allocated to each. This was known as MTM1. The Analyst needed to be meticulous in identifying all the movements and allocating the time units (not all Analysts were good at this, and preferred the stopwatch method). For an example, selecting a component and soldering it into a unit might take one minute, but the MTM1 process of analysing the movements and allocating the times could take up to four hours.

This meant that MTM2 was developed, with groups of small units banded together. For the soldering example, this simplified method could be done in under two hours.

MTM3 then came on to the scene, with larger groups of small movements combined. The soldering task could then be analysed in 40 minutes.

Using any of the MTM systems was helpful. A good example of improvement would be the use of a ratchet screwdriver rather than a fixed one, as that reduced the number of hand movements needed.

Not forgetting office work, Clerical Work Data (CWD) was developed, similar to MTM2. By careful analysis of typewriter key depressions and other movements, an accurate average time to type names and addresses could be established and a check made on stopwatch studies. The use of an electric typewriter had obvious advantages over a manual one.

As mentioned earlier, 'Motion Study' was the result of work carried out by the husband and wife team Frank and Lillian Gilbreth2. To aid them in their analyses of routine tasks, they developed 'Therbligs'3. There were 18 Therblig symbols in all, eg ∩ (grasp) and # (assemble). There was relatively little fine work in the general duties of a Method Study Analyst, so there was very limited use made of Therbligs in the UK.

Method Study in the UK was mainly used to speed up processes and often involved evaluating new machines and the latest technological advances. For instance, when the first electronic calculators came on the market, Work Measurement was used to see if they could replace comptometers. In direct comparison, the calculator was faster for multiplication and division, but slower than the comptometer for addition and subtraction. As the electronic calculator was more expensive, the comptometer remained until the computer sounded its death knell.

An apocryphal story of Method Study in action was when the army wanted a critical analysis for training purposes of setting up and firing a field artillery gun. The analysts decided to film the whole procedure including the truck arriving, uncoupling the gun, setting up ranging, firing a blank shell and then recoupling the gun and driving off. Upon studying and analysing the film in detail, it was noted that one of the gun crew stood to one side doing nothing to assist. On checking the archives it was found that the prescribed membership of a gun crew was based on horse drawn transport and the extra soldier would have held the horses.

Other areas of expertise included materials handling, with warehouses being fertile ground for improvements. Even specialist high street shops could benefit, eg by investing in hand trucks that could be hauled up stairs with an upright piano perched upon them - faster and safer than direct manual handling.

Ergonomics was a later addition to Method Study. This entailed detailed analysis of the working environment to eliminate health problems among workers such as back injuries caused by poor posture or use of machines or keyboards causing Repetitive Strain Injury. If there were instances of multiple complaints of workplace injuries and claims, consultants were usually employed at some expense.

Another tool used was Critical Path Analysis, particularly in large projects such as a building site. Consecutive tasks tended to form the path that set the optimum time to complete the project. Ancillary jobs could be aligned with the critical path and deliveries of materials organised around a 'just in time' basis.

To end on a thoughtful note: some Method Study experts, armed with their skills and experience, went home with the intention of rearranging the kitchen to a super efficiency level. These foolhardy projects always ended in failure for some strange reason.

1The next most popular rating scale was 100/133.2They and their methods for raising a family are the subjects of the book Cheaper by the Dozen by Frank Jr and Ernestine Gilbreth. Cheaper by the Dozen was made into a film in 1950 starring Clifton Webb as Frank (the 2003 film of the same name starring Steve Martin was not about the Gilbreths).3Almost their surname spelled backwards, but with 'th' being the main obstacle.