Believe It or Not, Mr Ripley: Norbert Pearlroth Spent 52 Years in the Library Content from the guide to life, the universe and everything 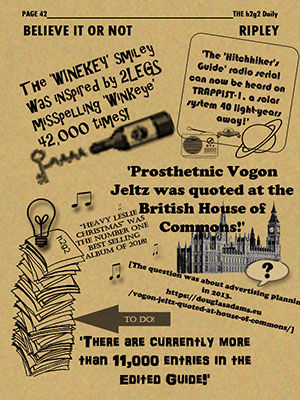 Robert Burton (1577-1640), British author of 'Anatomy of Melancholy', suffered from severe attacks of depression and found relief only by standing on Folly Bridge, in Oxford, listening to bargemen belabor each other.
- Ripley's Believe It or Not!, 13th Series, 1967

What does it take to be a good researcher? Curiosity, surely. Meticulous attention to detail. The ability to spend hours chasing down information in archives. A liking for libraries, perhaps? Throw in a few languages, dedication, and a boss with an appetite for trivia, and you begin to describe the 52-year career of Norbert Pearlroth. You may never have heard of him, but you may well have benefitted from his knowledge. Norbert Pearlroth was the sole researcher for Ripley's 'Believe It or Not' for more than half a century.

LeRoy Robert Ripley (1890-1949) was a US-based cartoonist, entrepreneur, and amateur anthropologist. He began his career as a sports cartoonist, but he ran out of material in the off-seasons. Ripley came up with the idea of combining cartoons with 'fun facts to know and tell', and his 'Believe It or Not' series achieved worldwide notoriety. Ripley loved to travel: he broadcast on radio and produced newsreels from remote locations, revealing his latest startling discovery. Usually, however, Ripley's 'discoveries' were based on home-grown research: Norbert Pearlroth was telling him where to look.

Pearlroth was finding his information in the New York Public Library – where he spent seven days a week, as a rule. Globetrotting Ripley (he visited 198 countries) grew rich and famous, and had a lot of girlfriends. Pearlroth made a modest living, and went home to his family on the subway. Apparently, they both liked it that way.

The Emblem of Office of the Chamberlains of the French Royal Court was a special passkey that could open every lock in France1.
- Ripley's Believe It or Not!, 13th Series, 1967

Norbert Pearlroth (1893-1983) was born in southern Poland, and attended the University of Krakow. He spoke 14 languages. At the end of the First World War, Pearlroth immigrated to the United States and took a job as a bank teller in New York City, which is where he met Robert Ripley in 1923. Ripley needed someone who could read foreign journals and had a sharp memory for miscellany. Ripley had found his researcher, and Pearlroth had found the perfect job. Together, they made trivia history.

While Ripley was busy being an international playboy and media darling, Pearlroth lived in Brooklyn with his wife Susan and two children. Every morning, he took the subway to his Manhattan office. There, he answered snail mail – up to 3,000 letters a week – mostly from readers who claimed 'Ripley' was wrong. Pearlroth claimed he was only wrong once, and that was on a technicality. He'd said a man named Seaborn was born at sea: actually, he was born on a ship at harbour.

At noon, Pearlroth, who didn't eat lunch, headed for the main branch of the New York Public Library to do his research. He researched an estimated 7,000 books a year. According to his son, there were worlds inside those books. 'Everyone has always believed that all of this information was found wandering the world, but it was really found on 42nd Street and Fifth Avenue at the Main Library.' That's a pretty amazing endorsement of libraries.

In addition to his column and books, which garnered 80 million readers around the globe, Robert Ripley started for-profit museums called Odditoriums. Call him the PT Barnum of the 20th Century, though unlike Barnum, Ripley's curiosities were based on solid facts, thanks to Pearlroth. When Ripley died in 1949, Pearlroth had been researching on a daily basis for 26 years. He continued to work for the successor company, King Features Syndicate, for another 26.

Tijana Radeska, writing in The Vintage News, 26 November, 2016, called Norbert Pearlroth a 'living Google'. He not only researched all that information: he memorised it. And he shared generously.

When he wasn't looking things up for the Ripley people, Pearlroth researched Jewish family names and answered questions for the Jewish Post, originally called the National Jewish Post and Opinion. Jewish family name history is a rich topic, requiring an extensive knowledge of often obscure and poorly-documented history. It helps to be a polyglot. Helping with name etymologies can be a valuable service for people interested in tracing the often painful migrations of their ancestors. Here's a sample of Norbert Pearlroth's column, Your Name:

Dear Mr Pearlroth: I am interested in the origin of my father's name, 'Rubacha.' Both of my parents are from the Pinsk District. – HARRIS L. RUBIN, Chicago.

RUBACHA is the typical Russian shirt-blouse worn by men of all conditions. Since it is hardly likely that your ancestor in 1804 wore a rubacha2 I can only assume that he either manufactured or sold this article of Russian wearing apparel. Rubacha is also the name of the dust cover worn over a silk top hat to spare it wear and tear. Perhaps your ancestor wore such a cover in 1804 and was named after it.

The ability Norbert Pearlroth had – to find, collate, interpret, and share information – is a rare skill. Pearlroth was a virtuoso in an unusual field – one might call him the Jascha Heifetz of the library card. Ripley must have been grateful that somebody liked spending all that time indoors. The wealthy entrepreneur did leave Pearlroth $5,000 in his will, and paid for his son Arthur's schooling. But Norbert Pearlroth seemed to be addicted to the acquisition and sharing of knowledge for its own sake. When they forced him to retire in 1975, he kept submitting factoids for no pay, in spite of the fact that he received no pension and no royalties from the books for which he was 'Research Director' (and the only researcher). Norbert Pearlroth: Jewish patron saint of Researchers, and a true mensch. And who would say that trivia is not entertaining? Certainly nobody who reads the Hitchhiker's Guide to the Galaxy: Earth Edition.

The Pandango sa Llaw, a lively Philippine dance, must be performed with a glass full of water balanced on the head, yet not a drop can be spilled.
- Ripley's Believe It or Not!, 13th Series, 1967

1Inquiring minds wonder if this was the original passepartout?2Probably because, being Jewish, he wore a different style of clothing.