Queremos Ensalada de Taco: Taco Salad for the Masses Content from the guide to life, the universe and everything 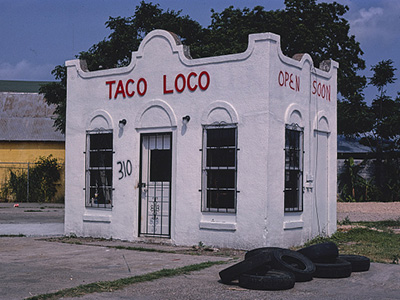 The origins of the taco are really unknown. My theory is that it dates from the 18th Century and the silver mines in Mexico, because in those mines the word 'taco' referred to the little charges they would use to excavate the ore. These were pieces of paper that they would wrap around gunpowder and insert into the holes they carved in the rock face. When you think about it, a chicken taquito with a good hot sauce is really a lot like a stick of dynamite.
- Katy June Friesen quoting Prof Jeffrey M Pilcher in 'Where Did the Taco Come From?', Smithsonian.com, 3 May, 2012

Tacos. The food that North American English speakers mistakenly believe is quintessentially Mexican. The fast food that you can acquire at the appropriately-named Taco Bell, now bereft of its signature chihuahua, either because of Hispanic American annoyance or because, frankly, the chihuahua, though cute, wasn't selling any tacos1. However, this inauthentically ethnic food is a staple in many US households for several reasons: it's cheap, you can make it yourself with very little cooking, kids like it, and it's actually nutritious.

There's only one problem with tacos: they're messy. Taco shells are stiff, like giant moulded maize crisps. They break. There may be times when you won't want to risk a potential hull integrity breach with your food. So we are going to offer you a less messy alternative: taco salad. This ironically-named entrée is really cheap to make – you can use broken taco shells – dead simple, and redefines the term 'fast food'. Make it at home. Refrain from speaking Spanish while preparing it, and you will offend no one. The kids will love you.

How to Prepare a Taco Salad

This recipe will serve 4-5 people.

A word about taco sauces: tastes vary. Those with sensitive digestive systems can usually manage medium, if provided with enough sour cream to balance the spices. A wise chef will, of course, supply a bottle of the 'hot' variety for those macho, competitive eaters who view spicy cooking as a challenge.

Taco salad is recommended for people in a hurry, people who hate to cook, or people who don't want to turn on the stove for very long on a hot summer evening.

Tacos are not recommended for inclusion in the folk festival's annual covered-dish luncheon. According to experts, they are inauthentic cuisine unless you're a silver miner. They're kind of like a Cornish pasty with a kick to it.

Image supplied by the Library of Congress.

1At any rate, Gidget the chihuahua died at home at the ripe old age of 15. Some people miss the slogan 'Yo quiero Taco Bell', voiced by comedian Carlos Jaime Alazraqui. Others do not.2US: ground beef.