Can We Ever Forgive Her? Lee Israel and Her Literary Forgeries Content from the guide to life, the universe and everything 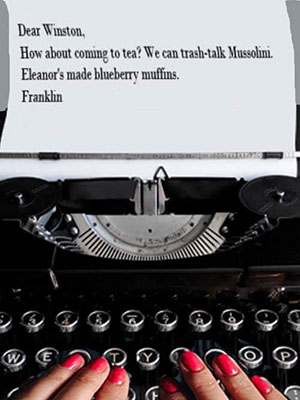 Currency counterfeiters arouse our ire: they destabilise our money supply. Art forgers? Potentially glamorous criminals who make headlines in the high-stakes, expensive world of high culture. But literary forgers? Who could possibly get exercised about something like this?

If Alan were home (about the most conditional sentence I have ever composed), he would send enormous love and best regards,
- Yours,
Dorothy Parker
P.S. I have a hangover out of Gounod's Faust.

Would you believe the Federal Bureau of Investigation? Well, selling fakes across state lines did come within their purview.

Can You Ever Forgive Me? (a fake Dorothy Parker line) is the author's memoir of her life of crime: why she became a literary forger, what she did with her ill-gotten gains, how she went about it, how she got caught, and what lessons, if any, can be drawn from the experience. It's a fast, breezy read, but one full of telling detail and amazingly dry wit. The reader can see how this woman managed to turn her sharp writing skills into almost foolproof forgeries. She was just that good.

A Biographer's Tale of Woe

Leonore (Lee) Israel (1939-2014) was a true New Yorker. She lived and worked in an apartment on the Upper West Side, venturing out to enjoy the city life with its theatres, clubs, and restaurants. A lesbian, she had ties to New York's artistic LGBTQ community.

In the 1960s, 70s, and early 80s, Lee Israel was a well-known and successful writer of celebrity biographies. Her biography of journalist and television personality Dorothy Kilgallen even reached the New York Times' bestseller list – fame indeed for a writer with modest ambitions. Israel had a gift for prose, meticulous research habits, and the ability to get inside her subjects' heads. Life was rosy, until Estée Lauder came along.

In the early 1980s, Lee Israel had been commissioned to write a 'warts and all' biography of Ms Lauder. Presumably, the 'warts' included the information that the cosmetics tycoon was descended from Hungarian Jews, rather than Hungarian aristocrats, as she usually claimed. This was a smallish deceit, but there may have been other issues Ms Lauder wanted to cover up. At any rate, Lee Israel received an offer through some shady lawyers of a hefty bribe to drop the book. The author refused – she writes that she blames Gregory Peck:

Perhaps I'd seen too many Gregory Peck films in my impressionable years – Peck with his simmering projections of outraged probity   – and emerged from the exposures with the opinion that taking bribes was wrong.

Refusing the bribe turned out to be a fatal move in Lee Israel's career. Estée Lauder pre-emptively published her own memoir, leaving Israel's unauthorised biography to languish on shop shelves. New projects became harder to find. The writer soon found herself in serious financial trouble – behind in her rent, her telephone cut off, forced to sell her personal book collection to make ends meet. When her beloved elderly cat needed veterinary care she couldn't afford, Israel snapped – and turned to a life of literary crime.

How to Be a Literary Forger

Israel's first method was fairly simple: she used her research and knowledge to forge casual letters by famous writers of the mid-20th Century such as Dorothy Parker, Edna Ferber, and Noel Coward. She knew these writers well. Most of them, like Lee Israel herself, were alcoholics. To gain access to literary archives, the author claimed to be working on a project dealing with famous writers and alcoholism. In the archives, she made meticulous notes on style, content, and phrasing, as well as typing habits. She also secretly practised signatures, the only handwritten parts of the letters.

The next step was to acquire suitable stationery and the right typewriters from second-hand shops in the city. Her collection of vintage typewriters – labelled 'Dorothy', 'Edna', etc – was impressive.

Finally, I got to see HELL'S ANGELS again. The film's flying scenes remain matchless. A lot of bad acting, of course, in the unfortunate style of the time, but Jean Harlow l[i]terally glistens...
- Louise Brooks (not really)

In all, she reckoned, Lee Israel produced about 100,000 words of imaginative forgery. She was kind of proud of her work. Some of her pieces ended up in a collection of Noel Coward's letters.

Noel Coward was nearly her undoing. A West Coast dealer began to question the sexual frankness of some of the Coward letters – after all, homosexuality was illegal in Coward's day, and he was far too careful to commit these sentiments to the mails. This was a mistake on Lee Israel's part: she'd taken the ideas from Coward's diaries, which were more private. There's a lesson in that for historical researchers everywhere.

Buyer nervousness about her literary forgeries led Lee Israel to phase two of her life of crime: outright theft. Visiting archives, she carefully copied the texts of letters that fit her needs. At home, she reproduced those letters, character by character, on her own acquired or custom-made stationery. Returning to the archives, she exchanged her forgeries for the genuine article. The stolen originals were sold to dealers by a rather dodgy friend of hers, a small-time grifter named Jack. Jack was able to get higher prices than Lee had dared to charge. Unfortunately, Jack drew attention.

In the early 1990s, the jig was up. The FBI cornered Jack, who confessed all. Lee also confessed, received a suspended sentence, and made restitution by listing her forgeries. Archives were restored. Librarians determined to be more careful. Lee Israel was banned for life from serious research libraries.

Fortunately for Lee and her cats, she found a paying job as an editor – one with benefits. She also wrote this memoir, which was somewhat controversial. Some people questioned the idea of allowing a forger to benefit financially from a crime:

What this is is a hilarious memoir of a self-described miscreant and her pursuit of a meal ticket. Ironically, in a joke the reader will share, by purchasing her book we all participate in buying her that meal.
- Barbara Bamberger Scott, Review in Bookreporter, 26 December, 2010

Why Read This Book?

There are several reasons to read this book.

The detached, loftily amused style with which Lee Israel describes even her most desperate moments in life are not only a tribute to her writer's dedication, but also a window into the psychology of a talented but tormented individual:

I dreamt that I was sitting in one of the chicken-wire buses on my way upstate to prison. Noel Coward was driving the bus, and I was surrounded by the celebrity subjects of my forgeries, who were not on this occasion such good company: all nattering about how bad my typing was, how inept my punctuation. Dorothy Parker sniffed at my use of serial commas, which she compared to serial killers.
- p.103.

Often amusing, Can You Ever Forgive Me? is also a deeply personal memoir. Whatever one's private answer to the title question, Lee Israel's story will arouse sympathy and moments of recognition in many readers.