Jean Harlow - Silver Screen Siren Content from the guide to life, the universe and everything 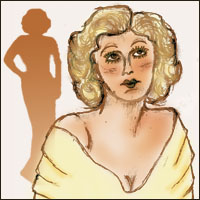 She didn't want to be famous. She wanted to be happy.
- Clark Gable

Many people remember Marilyn Monroe, but who recalls her idol, Jean Harlow? Born Harlean Carpenter on 3 March, 1911, in Kansas City, Missouri, she was to later adopt her stage name and become known as 'Hollywood's Original Blonde Bombshell'.

Her father, Mont Clair Carpenter, was a dentist. Her mother, Jean Poe Carpenter - also known as Mama Jean - was an aspiring actress - much to the disgust of Harlow's father. Her strong-willed mother was also unhappy in the marriage, which had been arranged, and they divorced during Harlow's early childhood. Mother and daughter went to Hollywood together, and Harlow was denied permission to see her father. Her mother soon met and married another man, Marino Bello, and the family moved to Chicago, Illinois, where Harlow received her high school education.

Harlow suffered from ill health during her childhood. She had meningitis when she was five and contracted scarlet fever at 15 while away at summer camp.

She left home at 16 to marry Charles Freemont McGrew II, seven years her senior. They soon left Chicago for Beverly Hills, Los Angeles, California. Harlow only had one ambition in life: to raise a family. Her mother, however, was determined that her daughter seek out work and succeed in Hollywood where she had failed. Harlow soon found herself as an uncredited film extra for $7 per day.

As a consequence of Harlow's job, her husband became jealous and their relationship ended in divorce shortly before the major breakthrough in her career. However, Harlow would never be short of offers of romance, nor did she shy away from it, once proclaiming: 'I like to wake up each morning feeling a new man.'

The New York Times reveals why so many people adored Harlow: 'In those days, it usually took four things to become a movie goddess: stunning looks, raw sex appeal, a willingness to do what you were told and ruthless ambition. Harlean Carpenter, significantly renamed 'Jean Harlow', had it all in abundance, except for the ambition, and that she didn't need because Mama Jean had enough for both of them.'

Would you be shocked if I changed into something more comfortable?
- Jean Harlow in Hell's Angels

In 1930, she took on the role of 'Helen' in Hell's Angels, which opened up when it became clear that Greta Nissen's Norwegian accent was undesirable for the talkies. This role established Harlow as a US sex symbol and acted as a catalyst to other memorable films such as Platinum Blonde, The Secret Six and Wife vs. Secretary.

She married MGM executive producer Paul Bern on 2 July, 1932. Only two months later, during the filming of 'Red Dust', he died from an apparently self-inflicted gunshot wound in the upstairs bedroom of their mansion.

At the time questions were raised as to whether he was the one who fired the gun. Had Harlow really gone to see her mother the night of his death? Was he also married to a woman called Dorothy Millette? These and many more questions remain unanswered, thanks to MGM's whitewashing of the whole affair, routinely done by film companies to protect actors - their main assets - from scandal.

It was suggested that Bern was impotent and had left a suicide note to that effect. The autopsy was inconclusive (although the physician did apparently note 'a physical handicap that would have prevented a happy marriage’). No-one was ever charged over his death, which the coroner ruled to be suicide.

Despite this tragedy, Harlow carried on working in the film industry. In 1933, she fell in love with and married cinematographer Harold Rosson. The marriage was to last only eight months.

Harlow’s comical side came through in her masterpiece Dinner at Eight, while Bombshell parodied her stepfather's greed and her mother's controlling personality. Two years later, in 1935, she legally changed her name to Jean Harlow, adopting her mother's maiden name.

Not long after her marriage to Rosson ended, she found a new love interest in actor William Powell. The couple were together for two years before they decided to marry. However, Harlow's health had deteriorated. During the filming of Saratoga in 1937, she was hospitalised with uremic poisoning and kidney failure. Her kidneys were probably damaged by a bout of scarlet fever. And there are rumours that her second husband, Bern, had beaten her and made the problem worse. Before the days of dialysis and kidney transplants, there was little that could be done, and she died on 7 June, at the age of 26.

Her last film was finished using trick shots and a double, but Clark Gable complained that he felt like he was 'in the arms of a ghost'.

Louis B Mayer, one of the founding members of MGM, organised a huge funeral and she was laid to rest in a mausoleum - paid for by Powell - in Forest Lawn Memorial Park, Glendale ¬(near Los Angeles), USA.

In the course of her ten-year acting career, Harlow was billed in a total of 36 films, starring alongside Gable in six of them. She also wrote a novel, Today is Tonight, which was only published in 1965.

Harlow modelled for many photographs, both nude2 and clothed. And was the first film actress to make it onto the cover of Life magazine. One of the photographers, Charles Sinclair Bull, later said: 'In the first sitting I fell in love with Jean Harlow. She had the most beautiful and seductive body I ever photographed.' George Hurrell, MGM's chief photographer, who also took shots of the actress, commented: 'Harlow was not frightened of the camera; she reacted to it, and in some strange way, I was the third party - they were the conspirators.'

Countess Margot Asquith wasn’t renowned for suffering fools gladly. When Harlow called her Margot, pronouncing the 'T' at the end, Asquith famously retorted that the 'T' was silent, as in 'Harlow'.

Most reviewers weren’t so critical:

A square shooter if there ever was one.
- Spencer Tracy

Always, she is so straightforward and human and pleasant to observe that she is of inordinate value to a film that certainly does require her gifts.
- Richard Watts, Jr of the New York Herald Tribune

Harlow summed up her appeal even more succinctly:

Perhaps the greatest tribute is her lasting influence. Redefining the 'Hollywood vamp', which had until then usually been portrayed by sultry dark-haired beauties, she popularised the platinum-blonde look that Monroe would later imitate, and many of her films still rank as comedic masterpieces.