'Maurice, or The Fisher's Cot' - a Story by Mary Shelley Content from the guide to life, the universe and everything 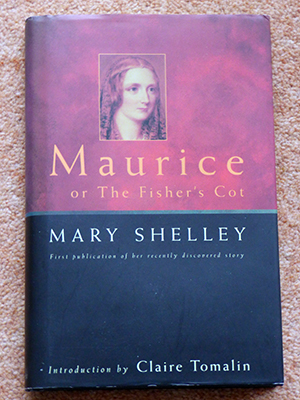 Mary Shelley is best known as the author of the novel Frankenstein, but she wrote a number of other works that were published during her lifetime. However, Maurice1 or The Fisher's Cot was not published until 1998.

The story centres around a boy, Maurice, and the series of people he encounters as he learns his true identity and finds his place in the world. The cottage where he spent many happy months (the Fisher's Cot of the title) is also a key feature of the tale, symbolising the love and loss that he experiences over time.

Maurice is a poor boy who is not in good health. His mother loves him, but he is a disappointment to his father who treats him badly as a result. When he is old enough to leave home to try to earn money, he becomes ill from working on a farm under a harsh master. After being sent away from there, he meets a melancholy fisherman mourning the death of his wife. In the Fisher's Cot, Maurice finds work that suits his constitution, and a home where he feels more comfortable - he helps Barnet the fisherman by mending his fishing nets, doing other light chores, and reading to him (all tasks that had previously been taken care of by Barnet's late wife) and so becomes like the son the man had never had. Maurice loses his home as well as his job after his companion dies, but he soon meets a stranger who is not a stranger after all. Maurice finds out he is really the child of wealthy parents but never forgets the time he spent as a poor boy, even though the cottage succumbs to the elements, so the tale is happy in the end.

The story was written in August 1820 for Laurette, the 11-year-old daughter of Mary's friend Margaret Mountcashell. Mary's father William Godwin owned The Juvenile Library, a publishing firm specialising in books for children, and Mary submitted a copy of the manuscript to him in 1821. However, her father judged it to be too short, even as a children's story, so it was not accepted for publication and was believed to have been lost after that.

The original manuscript, handwritten and hand bound by Mary as a gift for Laurette, was found by Laurette's relatives in 1997. Laurette married twice but had no children. After she died in 1880, her possessions were kept by her second husband, mathematician Placido Tardy. He moved in with the son of Laurette's sister Nerina (Nerina had died in 1874) and his possessions were kept in boxes in the family home after his death in 1914.

The story was published in 1998 by Penguin Ltd. The book includes images of the original manuscript (complete with crossings out where Mary made mistakes or changed her mind about which word to choose) as well as a detailed commentary about the story, Mary's life, and the life of Laurette and her family. There is also an appendix containing the poem written by Laurette's mother about Mary's husband Percy Bysshe Shelley2.

Although it is only around 7,000 words long, the tale is divided into three Parts, mirroring the novels of the time that were designed to be published in three volumes. The themes in the story also reflect the themes of Mary's previous writings and personal experiences. She wrote of parental-figure deaths and a displaced child in 1820 in the novella 'Mathilda'3, for example. As her mother had died when Mary was born, she was brought up by a stepmother and perhaps felt as out of place as Maurice. By 1820, Mary had had three children and they had all died, so thoughts of love and loss would likely have been very much at the forefront of her mind at that time.

1Not to be confused with the 20th Century novel of the same name by EM Forster or The Amazing Maurice and his Educated Rodents by Terry Pratchett.2'Twelve Cogent Reasons for Supposing PB Sh-ll-y to be the D-v-l Inc-rn-t-'.3'Mathilda' was not published until 1959 because it included a theme of incestuous desire.