A Philip K Dick-tionary, Not Wrapped in Wub Fur Content from the guide to life, the universe and everything 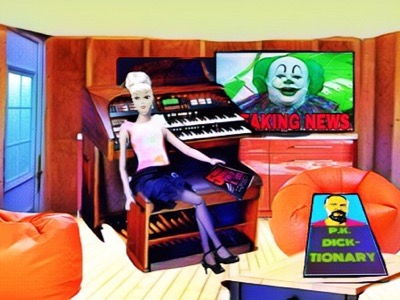 Philip Kindred Dick (1928-1982) was a prolific writer, mostly of science fiction, with a unique philosophical and theological approach to his subject. Although the author was not famous outside the world of science-fiction fandom in his lifetime, Dick's work has become increasingly better known since his death. The cult classic film Blade Runner is (very) loosely based on his novel Do Androids Dream of Electric Sheep? His Hugo-award-winning alternate-history novel, The Man in the High Castle, has been adapted into a much more faithful series for Amazon Prime streaming video – as Philip K Dick would have said, 'Available on a vidscreen near you.'

Philip K Dick's characters talk like that. They inhabit uncanny worlds which are somehow strangely familiar to us at first read. As readers, we are often uncomfortable with how comfortable we are in societies where our Perky Pat layouts contain minned versions of hotly-desired home requisites, where news clowns tell us all about the latest pronouncements by everybody's favourite president, Yance, and where we make our way from our conapt (after dutifully paying the talking door to let us out) and hail a passing flapple. Philip K Dick was good at making up language like that: appropriate, instantly recognisable, and catchy. Fans love that kind of talk – and some of it has made its way, via science fiction, into general discourse. It might be helpful to have a wordlist.

Here, then, is a brief, unofficial dictionary of some Philip K Dickisms, with notes on their use.

I Not Kid You1: Words to Experience the Future By

Polish philosopher and science fiction writer Stanislaw Lem (1921-2006) wrote of Philip K Dick that he 'does not so much play the part of a guide through his phantasmagoric worlds as he gives the impression of one lost in their labyrinth'5. In a way, though, Dick has supplied useful vocabulary for us, the denizens of the dystopian future he imagined so clearly only a few short decades ago. As we sit in our conapts, staring at our vidscreens in horror at the news clowns, only to be interrupted by the nagging call of a household appliance, we might well murmur, 'Philip K Dick, thou should'st be living at this hour.'

If you are unfamiliar with the works of Philip K Dick, you will no doubt wish to remedy this alarming situation. We recommend the excellent bibliography at The Philip K Dick Bookshelf as a starting point.

1'I not kid you' is a phrase actually used in Philip K Dick's Ubik.2It will come as no surprise that Perky Pat was inspired by the Barbie doll. In a note to the anthologised version of 'The Days of Perky Pat', Dick wrote:

The idea was that the purchase of countless new clothes for these dolls was necessary if Barbie and Ken were to live in the style to which they were accustomed. I had visions of Barbie coming into my bedroom at night and saying, 'I need a mink coat.'... I was afraid my wife would find me and Barbie together and my wife would shoot me.

3Dick's Martian hovels could be read as a critique of Ray Bradbury's Martian Chronicles, in which Martian living is sort of North American 1950s suburban.4Like 'needlessly messianic', only in reference to the Holy Spirit, aka the Paraclete.5In his essay 'Philip K. Dick: A Visionary Among the Charlatans'.