Creating Believable Fictional Worlds Content from the guide to life, the universe and everything 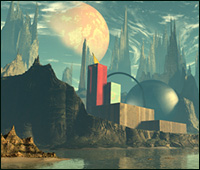 Creation of the perfect fictional setting allows fast-flowing narrative and believable situations to emerge from even the most outlandish or alien locales. Without doubt, the least documented and most overlooked instrument used in the creation of convincing fiction is that of a comprehensive, detailed, world-building methodology. Today's plethora of 'how-to...' guides for writers mainly concentrate on the more self-contained storytelling components, such as characterisation, snappy dialogue, inflection points and plot twists. The great masters of fantasy, such as JRR Tolkien (The Lord of The Rings' Middle Earth) and Frank Herbert (Dune  – The Planet Arrakis), created alternate worlds containing a substance and authenticity often not found in many of today's offerings. Their indefatigable attention to minute detail allowed them to create believable stories reinforced by delightful history and comprehensive social infrastructures.

They crafted alien races that had complete language definitions. They detailed innovative architectural constructs and alien geographical features, along with economic climates that would govern the character's viewpoint and social standing. The grand extent of these works of fiction demanded thousands of hours of hard graft from their respective authors, but it ensured that the fantasy world was as perfect as it could be. The point is, when you read the final product, the world comes to life, and hence enhances the prose and allows the story to flow, unhindered, through its framework.

So, How Does it all Work?

The process of world-building applies to both normal fiction, in an earthly locale, as well as fantasy/science fiction, where a completely alien set can be used. By running through a simple methodology, prior to starting the story-craft, the author will paint the canvas that describes the setting in enough detail to make it real. A sample piece of prose, without any preparation or pre-design:

Caleb strolled past the large government building, straining his neck to see the top. The intense heat from the midday sun caused a haze to engulf the massive concrete edifice, making him dizzy as he squinted to see through it. Suddenly, he lost his footing and staggered from the pavement. Speeding cars violently swerved around him as drivers angrily slammed on brakes and pumped their horns...

Or it could be reconstructed like this, if the groundwork into Caleb's World had been done in advance:

The massive Cryonaughtics Tower thrust several hundred floors of kylar concrete into the twin-sunned Maluvian sky. Zairex, the big sister of the binary star system, burned down upon the sweltered inhabitants of Phoranti city. Caleb glanced up along the rigid lines of kylar that defined the Cryonaughtics HQ. The heat haze made his vision blur and his head spin. Suddenly he found himself falling into the oncoming traffic, irritating the Lythopod drivers into flicking their tails at his distress.

In this snippet you can see the alien world gives the story more substance, and draws the reader deeper into the story, without overstating the fact that it's on another planet.

The fantasy world allows the author to introduce matter-of-fact descriptions of completely alien concepts, without them seeming out of place. Similarly, if the world where the story unfolds is not consistent, the reader will be distracted by irregularities or banality, and the story will eventually fail. Writers new to the concept of world creation often find it difficult to start the process off. It's a very demanding piece of work but when it's completed, you'll be amazed at how rewarding and useful the experience has been. The framework is now in place to allow you to churn out story after story, and the process of creation itself will have left you with countless premises for future works.

There are a number of simple, yet very effective, things that need to be done in advance of starting to build your fictional world. This is a useful checklist:

OK, now that that administration is in place and you've asked yourself all the fundamental questions, it's time to get technical. The following things need to be considered in as much detail as you can possibly tolerate. As your stories start to pick up momentum, revisit your world and fill in any gaps that haven't yet been considered. Occasionally you should review the complete creation, scrutinising it for inconsistencies. This accomplishes two things: it irons out any problems, and also leaves you with a great feeling of achievement. You have created an all-embracing, awe-inspiring, fantasy world.

Your World in the Universe

Next comes the detail. Go through this list and ask every question of your world. Where possible, fill in detailed information. Start with the basics of life:

The Detail: The Peoples of the World

Who actually lives in the world you have created? Answer the following questions on the populace and what makes them who they are and you will have a great framework for creating very believable characters.

Moral values, living hardships, customs and religion should become part of the community that your characters live in.

The Detail: Business as Usual

Finally, try and determine the way the commercial systems of your world are organised. Also try and determine how wars or disasters may have affected the economic system as it currently is compared to previous ages.

OK, you've finished working through the lists, and you now have a world that looks superb; it's now time to walk away and have a break. Do whatever you do to relax; make yourself a nice cup of tea, or maybe open a bottle of Côtes de Nuits. Whatever it is, make sure and relax.

The amount of work that you've just undertaken may have seemed like an almighty slog and sometimes, when consumed by detail, it's difficult to see the point. When you return to your work after a few weeks (you could put it away for a month and try spending some time with your family) you will be able to review it with a fresh and balanced viewpoint.

Finally, make changes to your world where the detail doesn't make sense. Explain the gaps. Filter out any clutter that may have appeared when you were immersed in the detail of language semantics late one Saturday night. Fix the problems and revise anything you are not happy with; and again, leave it for another few weeks. This will allow your ideas to 'bed in' - if your head is still spinning from the details of the world you've just created, it's not time to start the story.

Once you've started sleeping properly, without waking in a cold sweat during ruminations about currency designations or religious orders, then it's time to write your story. This is where the rest of what you have learned about writing comes into play.