Notes on the Lunatic Fringe: Art, Hair, and Emancipated Children Content from the guide to life, the universe and everything 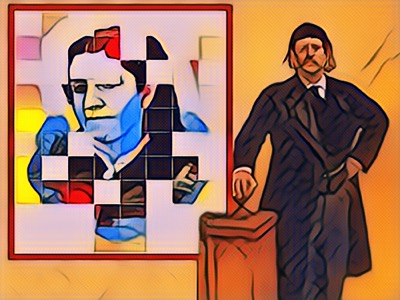 When we study the past, we aren't always trying to learn from the alleged wisdom of our ancestors. One of the most important things the past can do for us is to answer the vexing question, 'How the heck did we get here in the first place?' Understanding the meandering byways of causation that led to our current predicaments – often by what can only be described as uncalled-for accident – may help us trace a path back to tenuous sanity.

The problem is that the past can be murky. It's often poorly documented, like a badly-behaved software program left behind by a disgruntled engineer who has left the company in a huff and moved to Australia, leaving a dead AOL email link and no forwarding address. Deciphering it can be a challenge. That's the bad news. The good news is that chasing down historical leads can be fun. Even better news: hunting around in the past can result in happy accidents as we stumble across interesting facets of bygone ways of life that we never suspected were there. We might even meet some nice people.

Which is what happens when we try to figure out why former US President Theodore Roosevelt had an opinion on art, of all things, and how he came to coin the phrase 'the lunatic fringe'. It's a hair-raising tale, so let's begin.

Theodore Roosevelt Has an Opinion

Theodore Roosevelt (1858-1919) was the 26th president of the United States. He was a man of many talents: a writer, explorer, cavalryman, early environmentalist, contradictorily, big-game hunter, and political reformer. Roosevelt had many interests, and he was not exactly shy about sharing his opinions. When he didn't approve of the way his hand-picked successor, William Howard Taft, was running the country, Roosevelt (TR to his friends, which Taft wasn't any longer) ran for the office again as an independent. TR's third party1, informally known as the Bull Moose Party, lost the election, but so did William Howard Taft. Leaving Democrat Woodrow Wilson to deal with the questions of women's suffrage and the looming war in Europe, Roosevelt turned his considerable energies to other pursuits.

Such as criticising art exhibits.

It is vitally necessary to move forward and to shake off the dead hand, often the fossilized dead hand, of the reactionaries; and yet we have to face the fact that there is apt to be a lunatic fringe among the votaries of any forward movement.
- 'A Layman’s View of an Art Exhibition', Outlook, 103 (29 March 1913): 718–720.

The art exhibition in question was the show at New York City’s 69th Regiment Armory, in which Americans were first introduced to the likes of Picasso, Gauguin, Matisse, Seurat, and the redoubtable Duchamp. Most people were in shock after seeing it – they thought 'art' was supposed to look, well, different from that, so TR's opinion is amazingly enlightened, especially for an older layperson. But that isn't why historians are still talking about that article.

They're still talking about the article because, seemingly out of nowhere, TR refers to the 'lunatic fringe'. Now, in the 21st Century, just about everyone knows what is meant by 'lunatic fringe':

lu·na·tic fringe: an extreme or eccentric minority within society or a group.
- Google

That's certainly the way TR uses the phrase, which is arguably perfectly designed to describe Marcel Duchamp. Duchamp might have appreciated the term. But this was the first use of the term. Where did TR get it from?

Believe it or not, from an old hairstyle – for women. (TR must have had a prodigious memory.) So let's go back to 1874 and ask, 'What was a lunatic fringe, and did you want your daughter to wear one?'

Okay, We'll Ask: What Was a Lunatic Fringe When It Was on a Human Head?

A 'lunatic fringe' was what early detractors termed what is now called a fringe – in the US, 'bangs'. In other words, shorter hair that hangs down over the forehead. Apparently, this style became all the rage with teen girls in the 1870s and 1880s, and boyfriends and parents alike hated it. Plus ça change. They didn't like it on the Beatles, either.

We're pretty sure the term 'lunatic fringe' to describe a hairstyle goes back to the first half of the 1870s. The term shows up in magazines and newspapers from 1874-76, mostly in negative references. In 2006, Yale law librarian Fred Shapiro found this reference, thought to be the earliest one:

"The girls!" exclaimed Miss Lizzie, lifting her eyebrows till they met the "lunatic fringe" of hair which straggled uncurled down her forehead.
- 'Four Days' by Sophie May, in Oliver Optic's Magazine, February, 1874, p.140.

As the term 'lunatic' would indicate, the fringe was not well-received in the 1870s and 1880s. But that need not concern us further. We now know where TR got the term, though the thought process by which he came to apply an outdated term for an unpopular hairstyle to Cubist painters is best left unexamined. That way madness lies.

What we want to know now is, 'Who is this "Miss Lizzie"? And what is interesting about her, apart from her fringe? To find this out, let's investigate the author of this piece.

Who Was Sophie May, and Why Was She Talking About Fringes?

Sophie May was the pen name of Rebecca Sophia Clarke (1833-1906), an educator and children's writer from Norridgewock, Maine. Ms Clarke chose the last name May because, as she said, 'I may or may not write another children's book.' We like her already.

We like Sophie May even better when we read 'Four Days'. Unlike most children's writers of her day, Sophie May didn't describe impossibly perfect children who said 'cute' things. She wrote about real kids with real problems. Sophie based a lot of her stories on her nieces and nephews. She used real-life situations, which might be how the 'lunatic fringe' got into this story.

'Four Days' is a story about a girl named Adelaide. Adelaide's parents died when she was only a teenager – the sort of thing that happened all too often in real life. Adelaide has been taken in by her uncle and aunt, who have two children of their own. One is Lizzie, the aforementioned fashion victim. The other is Jimmy, a lazy, mendacious sort of young man. Both of them are coddled by their shopkeeper parents, who continually criticise Adelaide while exploiting her for free labour. The entire family is nearly as unpleasant as Harry Potter's relatives.

Adelaide is a resourceful girl, however. Realising that she's about to turn eighteen, she emancipates herself from her unfriendly kinfolk by using her education. She announces, politely but firmly, that she's going to become a live-in companion to a very nice middle-aged lady, while also working as a schoolteacher. Ignoring her relatives' complaints that she is ungrateful, Adelaide placidly pursues a better life. For its time, the story's rather ground-breaking in its respect for the rights of young women. We feel like shouting across the distance, 'You go, girl!' The world clearly belongs to those who read a book or two, know their own minds, and do not succumb to the temptations of fleeting fashion and lunatic fringes.

Our trip through literary history has yielded a few small lessons:

Would you like to pursue this topic? For further reading, we recommend:

1Or fourth, depending on whether you counted Eugene V Debs, who was already running.