Ida Wells Makes Noise: The Columbian Exposition Protest of 1893 Content from the guide to life, the universe and everything 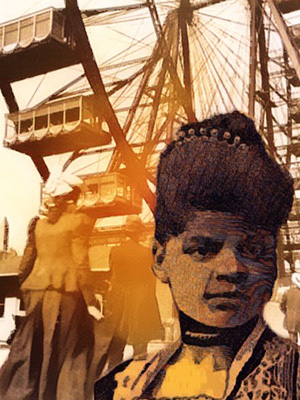 Human rights are fragile. Basically, all it takes to violate them is for the majority of people to decide they don't care what happens to [that group over there that they don't happen to belong to]. It usually takes a massive campaign of education and protest to change this attitude. Most of the time, laws have to be passed to stop people from abusing each other on the basis of perceived difference.

Once the laws are passed, most people immediately forget about them – at least, if they don't belong to one of two groups. The first group is the one whose rights are being protected. The second group is the one that was doing most of the persecuting. They're usually busy looking for a way around the law.

All this is by way of introducing Ida B Wells' summary of African American history in her pamphlet, The Reason Why the Colored American Is Not in the World's Columbian Exposition, which was passed out by the thousands at the 1893 Chicago World's Fair. Let's take a look at the civil rights situation in 1893, Ida B Wells' life and work, and what happened when she protested.

Why They Weren't at the Fair

You remember the Chicago World's Fair, right? The White City on Lake Michigan? That's where the world's first Ferris Wheel turned, and John Philip Sousa's band played the Monty Python theme on it. It's where Farida Spyropoulos danced the hootchy-kootchy to the tune of 'There's a Place in France', which was fine because it was 'culture'. It's also where the infamous serial killer HH Holmes plied his deadly trade (he wasn't invited). There were pavilions and displays from around the world at this massive exhibition. But there was no African American Pavilion at the Fair. What gave?

The lack of African American participation wasn't for lack of trying. As they explained in their pamphlet, they had applied to the Board of Lady Managers, but the Lady Managers (who planned the fair) weren't interested:

The majority of the Lady Managers ignored the letters of inquiry entirely, while some were frank enough to speak their pronounced opposition to any plan which would bring them in contact with a colored representative and to emphasize the opposition by a declaration that they would resign in case such an appointment was made.
- 'The Reason Why', FL Barnett, p71 in the pamphlet.

In other words 'ladies' refused to talk to 'those people'. The men were no better. When security guards were hired for the Fair, called the 'Columbian Guard', applications were accepted from all over Chicago. Curiously, all of the African American applicants were somehow lacking. Their chests were too small, for example, or they were a quarter inch under the height requirement. Sorry, we're not racist, but... rules are rules. In addition, only two African Americans ever found a clerical job at the Exposition. All in all, as FL Barnett wrote, the motto seemed to be, 'No Negro need apply.'

Deprived of official representation at the Fair, the African American community produced their pamphlet, edited by Ida B Wells. The pamphlet contained an introduction in English, French and German. It explained to the visiting millions from around the world just who African Americans were, what they had been doing since their emancipation, and what it was about them that was making the white organisers so nervous. In short, why they weren't at the Fair. The booklet featured articles by Frederick Douglass, the most famous African American leader of his time, FL Barnett, a lawyer, and Ida B Wells herself. So who was Ida B Wells, and why should anybody listen to her?

Ida B Wells, also known as Ida Wells-Barnett, is one of the coolest historical figures you've probably never heard of. She was born in Holly Springs, Mississippi, in 1862, which meant that she and all of her family were still in slavery to a cotton-growing empire that depended on forced labour and human trafficking. After the war, Ida's parents became active in efforts to improve life for their people: Mr Wells, a carpenter, attended the new college set up by the Freedmen's Bureau, and he and his wife supported the Republican Party, which was pro-civil rights in those days. Ida also attended the college, until her parents died in the Yellow Fever epidemic that hit the Lower Mississippi region in 1878. Ida became a teacher to support herself and her five siblings.

Eventually Ida Wells moved to nearby Memphis, Tennessee, becoming first a teacher and then a journalist. She was a civil rights activist and a feminist, outspoken in a time when it was physically dangerous for a woman of colour to be either one. Here are some of the highlights, or possibly low points, of Ida Wells' career:

Ida Wells was a force to be reckoned with. She was one of the first women to keep her own name in public life, calling herself Ida Wells-Barnett after her 1895 marriage to attorney FL Barnett, the co-author of the Chicago pamphlet. Ida Wells is a historical figure who even got her own postage stamp. But she had to fight a lot of hate to get there.

Here is part of what Ida Wells wrote to explain African American history to foreign (and US) visitors to the World's Fair:

The Civil War of 1861-5 ended slavery. It left us free, but it also left us homeless, penniless, ignorant, nameless and friendless. Life is derived from the earth, and the American Government is thought to be more humane than the Russian. Russia's liberated serf was given three acres of land and agricultural implements with which to begin his career of liberty and independence. But to us no foot of land nor implement was given. We were turned loose to starvation, destitution and death. So desperate was our condition that some of our statesmen declared it useless to try to save us by legislation as we were doomed to extinction.
The original fourteen slaves which the Dutch ship landed at Jamestown, Virginia in 1619, had increased to four millions by 1865, and were mostly in the southern states. We were liberated not only empty-handed but left in the power of a people who resented our emancipation as an act of unjust punishment to them. They were therefore armed with a motive for doing everything in their power to render our freedom a curse rather than a blessing. In the halls of National legislation the Negro was made a free man and citizen. The southern states, which had seceded from the Union before the war, regained their autonomy by accepting these amendments and promising to support the constitution. Since 'reconstruction' these amendments have been largely nullified in the south, and the Negro vote reduced from a majority to a cipher. This has been accomplished by political massacres, by midnight outrages of Ku Klux Klans, and by state legislative enactment. That the legislation of the white south is hostile to the interests of our race is shown by the existence in most of the southern states of the convict lease system, the chain-gang, vagrant laws, election frauds, keeping back laborers' wages, paying for work in worthless script instead of lawful money, refusing to sell land to Negroes and the many political massacres where hundreds of black men were murdered for the crime (?) of casting the ballot. These were some of the means resorted to during our first years of liberty to defeat the little beneficence comprehended in the act of our emancipation.

In other words, said Ida Wells-Barnett, freedom isn't free. It has to be fought for. The attitude of, 'You got your emancipation, what else do you want?' was disingenuous, to say the least. Ida Wells-Barnett knew that to right a wrong, you had to keep working the problem. You had to educate the public to what was going on. You had to point out the facts, even when the facts were so inconvenient, or even outright sickening, that most people didn't want to pay attention. It took an in-your-face approach – which is what the Columbian Exposition got. 20,000 copies of it. Which was probably what they were afraid of in the first place.

The pamphlet had some effect, along with the popularity of the Haitian pavilion. Haiti had asked Frederick Douglass to be its co-commissioner to the Fair. Douglass accepted, and the pavilion became a welcoming space for African Americans who attended the Exposition. The Haitian pavilion became so popular that embarrassed fair managers hastily organised 'Negro Day', 25 August, 1893. Poet Paul Lawrence Dunbar read aloud, Frederick Douglass spoke, and the Fisk Jubilee Singers sang. 'Negro Day' was a huge success: African Americans weren't invisible any longer. Their struggles and accomplishments were being acknowledged.

There are many good things concerning our country and countrymen of which we would be glad to tell in this pamphlet, if we could do so, and at the same time tell the truth.
- Frederick Douglass, The Reason Why the Colored American Is Not in the World's Columbian Exposition, Introduction

The 1893 Columbian Exposition was a victory of sorts. But in 1900, things got better. That was the year of the World's Fair in Paris. African American civil rights leader WEB Dubois, a sociologist, organised the Exhibit of American Negroes. Millions from around the world saw his graphs and charts showing the social progress African Americans had made since emancipation. They read a bibliography of African American publications, 1,400 of them – no shabby accomplishment in 35 years. They also saw around 500 photographs of African Americans at home, work, school and church. It was an eye-opener for many. It was also a justification for the groundwork done by Frederick Douglass and Ida Wells-Barnett. Sometimes, you need to stand up and make noise, even when people are shouting at you to sit down and shut up.