In Praise of the Heroic Theme Song: An Anglo-American TV Adventure Content from the guide to life, the universe and everything 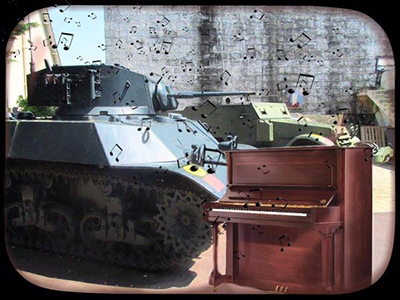 The 1962 blockbuster film The Longest Day depicts the 6 June 1944 Normandy landings, also known as D Day, as a series of ironic, often darkly comic mishaps interspersed with episodes of mass slaughter. In the midst of the collapse of Fortress Europe, a sense of narrative unity is supplied by an ingenious musical device: snatches of the film's theme are interwoven throughout the action, even being performed by the ubiquitous piano-playing RAF officer1. Only at the end of the film, when the contested beaches have been secured, do we hear the full theme. It's an elegant concept.

Unfortunately, the sung version of the theme, which turns up next, rather spoils the effect. The 'Longest Day Song', written by teen heartthrob Paul Anka2, features a robust male chorus singing about the significance of D Day.

Music lovers may have sighed, and French viewers may have rolled their eyes, but Anglo-American audiences were used to this sort of thing. The heroic theme song was a staple of their weekly adventure TV viewing in the 1950s and 1960s. Here is a guide to some of the best and worst of an extremely colourful lot. We provide this service in case you'd care to make your own retro mixtape.

The British Started It?

Now, listen to my story, yes, listen while I sing
Of days of old in Eng-a-land, when Arthur was the king...
- Alan Lomax3

This might not be completely true. It could all have been the fault of the House Un-American Activities Committee. In the mid-1950s, this organisation caused a number of award-winning professional screenwriters who were liberal in their politics to be 'blacklisted' – denied work – on the grounds that they were communists, or at least, had communist ideas. The Congressmen didn't like them, and didn't want them influencing the US public with their dangerous ideologies. This created problems for the writers – but also for the producers of films and television shows. Screenwriters are nothing if not creative, so they found workarounds. One of these workarounds involved going to the UK. The UK had a socialist government and a more liberal outlook. To be sure, they would still need to use pseudonyms if their television work was to be marketed in the US...

So the 'communist' writers did exactly what the Congressmen might have feared: they infiltrated television with their radical ideas, such as peace, freedom, and reasonably priced love. This resulted in a lot of swashbuckling on the small screen – and led to some really awful theme songs.

Sapphire Films, run by Hannah Weinstein, produced an amazing amount of swash and buckle between 1955 and 1960, all allegedly written by people nobody had ever heard of. Robin Hood, Ivanhoe, the Pirates of the Caribbean, and Lancelot all showed up to lecture kids about morality while impressing everyone with their noble deeds and fancy swordsmanship. The acting in these shows was above-par – especially the pirate series, which starred Robert Shaw, some great British thespians, and a lone antique sailing ship in Falmouth harbour. But the songs couldn't have been worse if the Red Army Choir had sung them.

These theme songs have a lot in common: they are upbeat. They feature male choruses. They tell of manly men doing deeds of derring-do. Their melodies are somewhat insouciant. But none of them comes even close to the chutzpah of the William Tell theme4, first heard by British audiences courtesy of ITC. The words are by Harold (no, not Henry!) Purcell, and the tune is by some obscure Italian named Gioachino Rossini.

Come away, come away with William Tell
Come away to the land he loved so well
What a day, what a day when the apple fell...

US audiences did not get to hear this theme, alas. Why not? Because the William Tell Overture was already taken by The Lone Ranger. But American kids were hearing plenty.

Meanwhile, Unbeknownst to the HUAC...

US audiences, particularly kids who watched Saturday morning television, were getting a weekly megadose of 'communism' along with their breakfast cornflakes. Robin Hood, Sir Lancelot, The Buccaneers, William Tell, and even Ivanhoe were all screened in glorious black and white – theme songs and all, barring the William Tell business. Kids soon got used to the male chorus nonsense, although few of their dads were known to belt out ditties when not in the shower. However, the manly theme song caught on in the US, too. This time, it was all about frontiers: colonial, Early American, or Wild West, take your pick.

By the mid-1960s, the public had clearly suffered enough. In 1965, a breath of fresh air blew through US television, bringing welcome snark. The manly, heroic theme song was not forgotten: it was merely stood on its head. To tell the story of F Troop, its stalwart but dimwitted soldiers and amazingly market-savvy American Indians, the theme turned ironic. Captain Wilton Parmenter was no Dan Tempest. He wasn't even a Bat Masterson. But he got a rousing theme song, nonetheless.

After that, cooler heads prevailed. We got theme songs with more explosions, but fewer ridiculous lyrics.

1The piano-playing pilot is a staple of Second World War films, both during and after that conflict.2Anka has a small role in the film.3Alan Lomax was a famous US musicologist, friend of Woody Guthrie and Pete Seeger, and, obviously, a prime target of the HUAC (House Un-American Activities Committee). He spent the 1950s based in London. While there he committed this musical outrage.4If you see that alpenhorn and yell, 'Ricola!' you are not alone.