Waist Deep in Commie Lies: Janet Greene, the Right's Answer to Joan Baez Content from the guide to life, the universe and everything 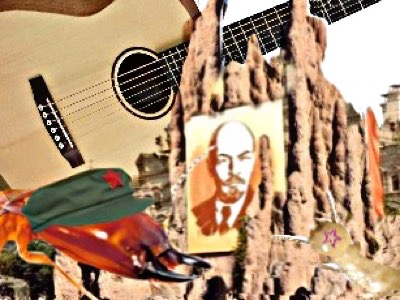 On 13 October, 1964, a promising new folk singer was introduced to the public at the Biltmore Hotel in Los Angeles. Stepping up to the mic, the attractive brunette with the long hair and fringe strummed her guitar and sang these words:

When I was young it seemed to me,
The whole world would soon be free.
But Communism is on the rise and Satan has a new disguise,
Be careful of the Commie Lies...
- Janet Greene, 'Commie Lies'

Er, what? No impassioned pleading for migrant farm workers? No praise for freedom fighters everywhere? No criticism of the power elite? An anti-Communist folk singer? What gave?

Janet Greene, the 'conservative' folk singer, was introduced to the world by those two Red-baiting stalwarts, Fred Schwarz, head of the Christian Anti-Communism Crusade (CACC)1, and Herbert 'I Led 3 Lives' Philbrick2, which should have tipped the audience off to what was coming. As Dr Schwarz, the stalwart anti-Communist crusader from Australia, put it, 'Well, they have Joan Baez. We don't have anybody.' 'They' were the political Left. Now, thanks to Dr Schwarz's discovery (invention, really) of Janet Greene, the Right had its own folk singer, so there.

But who was Janet Greene, anyway? And why did the Red-baiters think all folk singers were, if not outright Communists, at least fellow travellers? To answer the second question first, we need to go back to the Great Depression.

Dr Schwarz had a point about older folk singers. Woody Guthrie, for instance. His guitar bore the inscription, 'This machine kills fascists'. Guthrie wasn't just a 'premature anti-fascist', however. Along with other leading folk singers of his day, Guthrie applauded the efforts of the struggling new Soviet Union, and wrote and advertised in the Daily Worker, the newspaper printed by the Communist Party, USA (CP-USA). So, yes, they were really Communists.

Other folk singers from the 1930s and 40s were also Leftists, notably Pete Seeger, a leading force in organising the Almanacs, an anti-war group that opposed US entry into World War II – until Hitler attacked the Soviet Union, at which point the Almanacs changed their tunes... or their lyrics, anyway... and supported the war. Another member of the Almanacs, Burl Ives, later changed his tune as well, 'naming names' to the House Un-American Activities Committee. One of the names Ives named was Seeger's, which led to the singer's being blacklisted for years. The Seeger controversy also led to a famous scandal in 1967 over the censoring of Seeger's appearance on the Smothers Brothers' television show, where he sang 'Waist Deep in the Big Muddy', a song deeply critical of US policy in Vietnam. So the folk singer-Communist connection of the 1950s had long-term consequences.

With this sort of pedigree, it was no wonder that political conservatives regarded the 1960s Folk Revival movement with suspicion. But was it an excuse to get this snarky, as the CACC Newsletter did when touting Janet Greene?

For one thing she looks like a girl. Not many female protest singers can say that. And that may be what they are really protesting against, deep down. Granted, there are plenty of male protest singers who look like girls, but they don't look as good as Janet Greene either. Also, Janet does things that most protest folk singers wouldn't dream of. Like taking a bath. And like wearing clean clothes and dressing neatly and being legally married and having legitimate children and loving her country. You know, corny things like that...
- Woolsey Teller, 6 June, 1966

Which brings us to the other question: just who was Janet Greene?

From Cinderella to Red Basher

Janet Greene was born in 1930 in Ohio, and she suffered the kind of Depression childhood that Seeger, Guthrie and Ives often sang about. She wasn't political. In spite of grinding poverty, Janet managed to get opera training in Cincinnati. She loved music, and she had talent. As a young mother in the 1950s, with a husband who felt that his wife shouldn't work, because '[h]ousework and raising a family was enough work3,' Janet didn't have much of a career. However, Janet began singing in local clubs, and was 'discovered' by a local television station, where she soon became a hit playing Cinderella on a children's show. Beautiful and gifted, Janet entranced her youthful audience as she sang to (and kissed) the show's puppets.

Unfortunately, Janet also entranced the station manager, a notorious serial sexual harasser. When this manager informed Janet that sleeping with him was a condition of further employment, the outraged wife and mother of two stormed out of the studio. When she returned the next day to retrieve her personal property, Janet was confronted by police, called in by the station manager, who claimed that he had been threatened. One thing led to another: Janet was arrested, tried for disturbing the peace – and yes, this made a lot of local headlines, what reporter could resist? – exonerated, and hired by a television station in Columbus, Ohio, to play Cinderella there.

In Columbus, Janet was 'discovered' again, this time by Fred Schwarz and the CACC, who were friends of her husband. At first, Janet was a bit reluctant. What did she know about politics, anyway? And she hadn't been to college. But the opportunity to move to southern California was appealing... so Janet agreed to become the 'anti-Baez', although frankly, she was a bit of a Baez fan herself.

In all, Janet penned eight songs for the CACC effort. How? By listening to Fred Schwarz talk, jotting down ideas (this was harder than it sounds4), and setting them to music. The resulting songs are still around, and judging from Youtube, are still attracting fans among the Far Right.

After about three years of this, Janet Greene tired of being the 'anti-Baez'. She went back home, in spite of Dr Fred's pleas. Other conservative singers strove to fill the gap – for example, the short-lived but clean-cut group The Goldwaters, who rather forfeited their raison d'être when their candidate lost by a landslide to LBJ. More durable both in influence and music was the Moral Re-Armament movement with its Up with People campaign. Up with People's less overtly political songs were subtler, but the organisation's political connections and deep pockets disturbed some people, and some former members, such as actress Glenn Close, describe the movement as 'a cult'.

And Janet Greene? Oh, she eventually divorced her Red-baiting husband, married a Spanish artist and went back to lounge singing, her first love. Pete Seeger died, and Guthrie's guitar no longer kills fascists – if it ever did. Probably more survivors of the 60s can recite the lyrics to 'Waist Deep in the Big Muddy' than 'Commie Lies' nowadays, but a lot of today's folkies would wonder what all the fuss was about: isn't folk music all about sea shanties and such? And where are the Morris dancers?

1CACC appears to be an ongoing organisation, now dedicated to fighting 'Marxism, Freudianism, evolution and postmodernism.' Disciples of Judith Butler should be informed that, in addition to worrying about the academic journal Philosophy and Literature, she now needs to look out for the anti-Communist crowd.2Sometimes filmed in actor Richard Carlson's backyard, this unintentionally funny McCarthyite television series focused on the dedicated efforts of undercover agent Philbrick to prevent such catastrophes as the destruction of the American Way of Life using ordinary household objects. Gene Roddenberry, in his pre-Star Trek career, penned a nail-biting episode containing much useful information about the safe handling of radioactive materials in your home.3This and other quotes from CONELRAD Adjacent's insightful extended interview with Janet Greene. For more information, see Anti-Baez: The Ballad of Janet Greene.4Fred Schwarz talked like this, which made him even harder to set to music than William F Buckley.