Lion Salt Works, Northwich, Cheshire, UK Content from the guide to life, the universe and everything 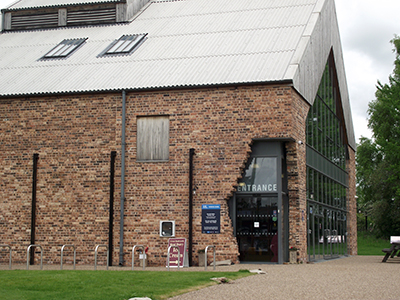 The Lion Salt Works museum in Cheshire tells the story of salt through the ages, from manufacture to distribution, including the effect of salt production on the landscape. The site is a Scheduled Monument consisting of several Grade II Listed Buildings, as it is the last surviving inland open pan salt works in England.

Salt has been important to humans for thousands of years, as a substance for preserving food and also for use in industrial processes. In coastal areas, sea salt production can be carried out, but inland there may be seams of salt underground that can be extracted by mining the rocksalt directly, or by extracting salt from the brine formed when water flows through the seams.

In Cheshire, there are two seams of salt that formed in prehistoric times when the area was covered by sea water. There is a small one below Northwich about 50m below the surface, and a large one below Cheshire and Shropshire about 100m deep. Natural brine springs were exploited in the Iron Age, but the Romans made the process into more of an industry, creating lead pans that were heated on wood fires to speed up the production of salt.

Production was further increased in the Middle Ages, when brine began to be pumped out from the seams. Iron pans were used in the 17th Century, as they could be heated to higher temperatures over coal fires. Rock salt was mined from the small seam in Northwich from 1670, and the deep seam was mined from 1779. However, salt production from brine still continued, and numerous salt works were established in the area in the 19th Century. For many years men and women would have worked side by side on all tasks, but by Victorian times it was not deemed proper for women to be working in hot conditions wearing very little, so the jobs became segregated - men would rake off the salt from the hot pans while the women would work with the dry salt.

The Lion Salt Works opened in 1894. By then, the salt production method had been further refined. Brine was pumped out of the salt seam using steam engines, and the salt pans were very large. The size of the pans meant that three grades of salt could be produced in one go - closest to the end that was heated, large 'Lagos salt' crystals formed in temperatures up to 110°C. In the middle, the temperature was about 70°C and 'Fishery salt' was produced. At the far end, the temperature was about 40°C, and that is where the small 'Table salt' crystals formed. Each salt pan was situated in a Pan House, which was adjacent to a Stove House where blocks of harvested salt crystals would dry out. Above each Stove House was a Loft, where the dry salt blocks would be crushed, packed and stored until the product was sent to market.

By 1947, the Lion Salt Works was no longer making Fishery Grade salt as it concentrated on making flakes of salt for export to Africa. War in Nigeria in 1967-70 meant that the Salt Works lost its major buyers. Changes in the salt industry also affected the site, as vacuum pans, that had been used in producing sugar crystals since 1866, started to be used for salt production - at lower pressures, the water in brine evaporated quickly at lower temperatures, so less fuel was needed than for open pan salt production, making the resulting salt cheaper than that offered by the Lion Salt Works. The site finally closed in 1986, but was purchased by Vale Royal Borough Council to preserve its heritage.

Salt spray causes wooden structures to flake and become unsafe eventually, so the Pan Houses were intended to be temporary structures only - Pan House 1 was demolished in 1960. Pan House 2 was built alongside the Trent and Mersey Canal, so coal could be brought via narrowboat and salt could easily be transported out. A railway line was built linking Pan House 3 to the national network, again making it easy for fuel to be brought in and salt to be sent out - metal from a railway line was even used to reinforce the walls and floor of this building. Pan House 4 was built in 1947 and Pan House 5 was built in 1958. These buildings have survived to the present day, thanks to a programme of preservation, but the flaky wood and uneven floors in many places are testament to their temporary nature. Other buildings that have survived are a Pump House containing the brine pump, a Smithy, and what was the Red Lion Inn. 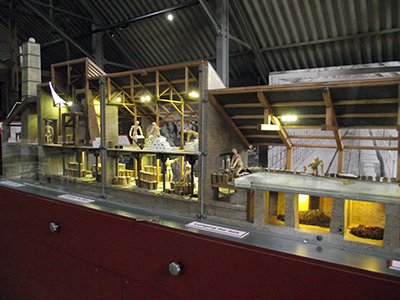 The Lion Salt Works Trust was set up in 1993 to make plans for a museum on the site. The Salt Works featured on the BBC's Restoration programme in 2004, and although it didn't win, it went on to secure a grant from the Heritage Lottery Fund in 2006.

Thanks to fundraising and £8 million from the Heritage Lottery Fund, a massive programme of refurbishment took place in 2014/15. Stove House 5 was taken apart and rebuilt with solid foundations and large windows to make a bright and welcoming entrance area with modern visitor facilities. Pan Houses 3 and 4 were made safe and, most impressively, lifts were added, giving access to each floor of the buildings. Thus visitors, not just those who could climb stairs, are given the chance to see the exhibitions inside, including the remains of the salt works. The museum opened in June 2015.

The Red Lion Inn building has been refurbished to include an exhibition about the making of salt in Cheshire, including information about the Thompson family, who owned the Lion Salt Works. One room in the house is a recreation of the bar in the Inn, and another room is laid out as the Manager's Office.

Pan House 3 has been restored to show something of what it would have been like to work on an open salt pan. Dry ice creates clouds of vapour to give the impression of how steamy the atmosphere would have been, an audiovisual presentation on the far wall replicates the sounds and actions of the salt making, and mannequins with tools stand alongside the salt pan itself.

Visitors then move through into Stove House 3, where the blocks of salt can be seen drying. An exhibition tells visitors about the salt production process, and there are hands-on machines and interactive computers to use to learn more. In particular, there is an impressively detailed scale model of the building showing how it would have looked as a working site, with people involved in making the salt, carrying blocks to the Stove House, lifting the blocks into the Loft, and packing the salt into bags or boxes.

Stove House 4 contains a crushing machine as well as an exhibition giving the history of the Lion Salt Works, plus information about the development of the museum. There is also a hands-on exhibit about what salt is. From here there is a great view across the canal to the Flashes. These are lakes occupying depressions in the landscape caused by subsidence where other salt works had been - so much salt was extracted that it caused the ground level to sink.

Stove House 2, linked to the other two surviving Stove Houses, gives visitors information about the geological landscape of the area as well as the plants and animals that make their home in the conditions created by industry - the different habitats include the freshwater Flashes, brine areas, and lime-rich soil created from waste products of chemical processes.

As well as the museum buildings, there is a children's play area, and a butterfly garden containing the Cheshire Collection of Buddleias.

The play area and garden are open all year round but the museum is closed on Mondays (except Bank Holiday Mondays). There is a charge to enter the Salt Works, but concessions, family tickets and annual passes are available. There is a small café, selling a range of sandwiches, cakes and drinks. The shop sells books and souvenirs as well as salt. The garden, play area, shop and café are free to enter, and volunteer-led tours of the site take place each day. Other events take place throughout the year, such as Roman re-enactments and science experiments linked to the story of salt.

If you cross over the canal you can reach the path around the Flashes. The Saltscape Trail through Northwich Woodlands takes you from the Lion Salt Works site to the Anderton Boat Lift, which links the Trent and Mersey Canal with the River Weaver, which in turn runs into the Manchester Ship Canal1.

1Before the Manchester Ship Canal was built, the Weaver was a tributary of the Mersey.