The Jaguar XJ13 - the Racer that Never Was Content from the guide to life, the universe and everything

Jaguar - a Car Manufacturer Born to Perform? | The Jaguar XJ13 - the Racer that Never Was 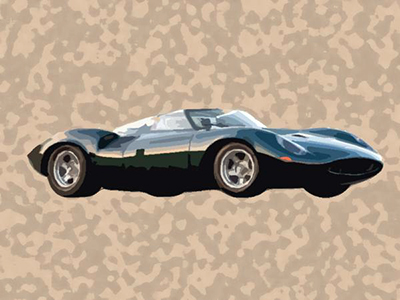 The British car manufacturer Jaguar had been making racing cars since the late 1940s. They had had great success during the early 1950s, but officially pulled out of motor sport in 1956. During the early 1960s, however, competition success was still on the minds of several Jaguar engineers. Plans were drawn up for a mid-engined racing car and a new, quad camshaft, 5 litre V12 engine to power it.

A prototype of this vehicle, known as the XJ13, was built in 1966. However, the owner of Jaguar, William Lyons, felt that any positive publicity that could be gained by winning with this car would be more than offset by the negative publicity that any failures would generate, and so the XJ13 never saw racing in anger.

Even so, the car went on to become a legend.

Although there had been no plans to race the car, it was kept in working order, as the management recognised its potential value for publicity stunts. Its day came when the Series III E-Type was about to be launched:

The idea emerged that the new Jaguar V12 engine in the Series 3 E-Type should be launched to the press at Geneva in March 1971 amid the sight and sound of a previously unrevealed, mid-engined V12 Le Mans car emerging into sight from behind the trees.
- Norman Dewis, Jaguar Test Driver1

So it was that on 20 January, 1971 a film crew from London met up with the XJ13 and driver Norman Dewis at the British Motor Industry Research Association (MIRA).

The car was filmed driving round the MIRA track at a modest speed, and all went well. Dewis was then asked to drive four laps of the track at high speed. The first two laps were good, but during the third lap at a speed of 135mph the car lurched to the right and hit the safety fence before somersaulting off the track and into a field.

Luckily, Dewis' driving skills and lightning reflexes meant that he survived the crash unscathed. He walked away from the scene having buried himself in the narrow confines of the cockpit and switched the engine off during the somersault. The state of the car was, however, a different matter.

What Caused the Crash?

There has been much speculation about what went wrong - the official explanation is that one of the wheels collapsed.

Norman Dewis confirmed that new wheels and tyres had been added prior to filming. The XJ13 Log Book states these wheels were made new after testing of the car only four years earlier (late in 1967). Excepting possible manufacturing defects, it is unlikely that they could have deteriorated to the point of failure in that short space of time in storage.

The use of magnesium as a constituent of alloy wheels was not a new technology in the 1960s – indeed, magnesium wheels were used on every car that won the Indy 500 from 1946 to 1963 - so that was unlikely to have been the problem.

It is believed that the incident occurred at a speed below those attained during the short period of the car's active development – although the speed at the time of the crash may have been in excess of 135mph it is unlikely the accident could have been caused by 'lifting' or other problems with the aerodynamic design of the car.

Another possibility could have been failure of one of the radius arms that attached the rear wheels to the engine mounting block. Examination of the wreckage revealed a damaged upper radius rod on the rear right-hand side (offside) however this damage could have been sustained during the crash. If not, a failure such as this could explain why the car 'lurched to the right' before making contact with the safety-fencing.

There was also an unsubstantiated rumour that a rear tyre was 'plugged' to prevent a slow leak before the final high-speed laps - could that have been the culprit?

It is now unlikely that the truth about the cause of the crash will ever be known – the important facts are that the driver, the legendary Norman Dewis, and the car both survived.

What was the Extent of the Damage?

After the crash, the car was taken back to Browns Lane, Jaguar's factory in Coventry. According to the Log Book's record of the post-crash examination, it does seem that the damage was not as extensive as first appeared. Suspension and steering was relatively unscathed with the notable exception of the upper offside rear radius arm. Major mechanical components such as engine and transaxle also survived with the only significant damage in that area being to the transmission oil cooler brackets (fitted above the transaxle).

However, the damage to the outside of the car was indeed extensive. The body structure of the XJ13 is entirely monocoque2 consisting of two wide sills (containing fuel tank-bags) which run from front to rear wheels. Between the two sills is a section of stressed floor and three bulkhead sections – two at the front and one immediately behind the driver. A further boxed section forms part of the rear bulkhead and serves to connect the sills at the rear. This entire body structure was beyond repair – doors and windscreen surround included.

The two front wheels were found to be OK but both rears were broken. Incidentally, this may support the argument that a broken wheel may have been a consequence of the crash rather than the cause.

The car remained in its sorry state for more than a year. When the time for the launch of a new V12 production engine loomed, it was decided that the car should be restored as a promotional vehicle. Ted Loades of Abbey Panels spotted the crashed XJ13 in storage at Jaguar and offered the services of his company to rebuild it for £1,000. The offer was accepted without hesitation.

The car's new status both permitted and required changes to be made to it during its rebuild to fulfil its new role. As a consequence, the rebuilt car deviated from the original design by aerodynamics expert Malcolm Sayer.

There are many so-called 'eyewitness accounts' of the damage suffered by the car and others claiming to have intimate knowledge of exactly what was damaged/replaced during its rebuild. The following represents the facts that this Researcher was able to establish (although it may not be a complete list):

A New Lease of Life

The rebuilt XJ13 is now preserved in the Jaguar Heritage Collection and can sometimes be seen in action at events such as the Goodwood Festival of Speed.

As the XJ13 no longer exists in its original form completely true to Malcolm Sayer's vision, and the rebuilt model is not able to race, one Researcher decided to create a race-worthy replica of the legendary car. He obtained a V12 engine in 2010 and was granted access to Jaguar's archives. His quest was completed in 2016 – see his Building the Legend website to learn more.

1Author of the book 'Developing the Legend'. 2Otherwise known as unibody, where the chassis is an integral part of the bodywork and not a separate unit.