Thoreau-ly Original: Henry David Thoreau and the New England Pencil Content from the guide to life, the universe and everything 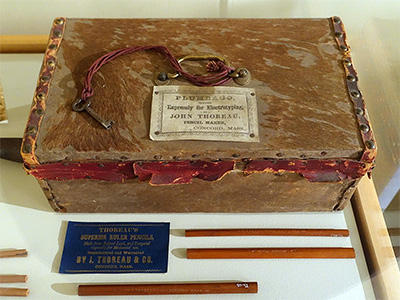 For one that comes with a pencil to sketch or sing, a thousand come with an axe or rifle. What a coarse and imperfect use Indians and hunters make of nature! No wonder that their race is so soon exterminated.
- Henry David Thoreau, The Maine Woods

Everybody and his aunt knows that Henry David Thoreau was an important thinker. They also know that Thoreau wrote two seminal works, On the Duty of Civil Disobedience and Walden.

Civil Disobedience was written when Thoreau got arrested for refusing to pay a poll tax. Thoreau decided a citizen should be willing to break the law to resist immoral government actions, such as the US war with Mexico. The essay was pretty influential, as it inspired Gandhi, Martin Luther King, and a myriad of other social activists. Walden also inspired many back-to-nature types, and gave a lot of people ideas, including hippies and tree sitters. As we said before, everybody knows that Henry David Thoreau got all these ideas while living in planned simplicity by Walden Pond near Concord, Massachusetts.

What many people might not know is why Thoreau built his modest house on Walden Pond, 'a mile from any neighbor'. Thoreau wanted quiet, and he couldn't get it at his family's house. For one thing, his mother was taking in boarders. For another, the pencil factory was just too loud.

The Thoreau family made the best pencils in the United States. And Henry helped.

Pencils, as we all know, contain graphite, which is why the business part of a pencil is called a 'lead'. Huh? Blame the ignorance of early graphite discoverers: they called the stuff 'plumbago', because 'well, it looks like lead to us.' Later, people started calling it graphite, from the Greek word γραφω (I write).

Graphite used to be really hard to find. Good graphite, like the stuff in the Borrowdale mine1 in Cumbria, UK, was so valuable that in Good King Henry VIII's day, the miners had to work under armed guard.

In the early 19th-Century United States, imported pencils were expensive articles. British pencils were often unavailable for political reasons2. German ingenuity had licked some of the issues involved in using inferior graphite, but North Americans hadn't got the tech memo yet. However, graphite was available, and mines were opened. Some New Englanders didn't even have to mine. The ragged cliff faces left by glaciation exposed strata of graphite, which farmers often picked out in their copious free time. It wasn't good-quality graphite, but an enterprising family could make money on pencils, if only they solved some of the process issues.

Joseph Dixon was a prolific inventor who was busy finding uses for graphite – as a lubricant, for polishing stoves, in crucibles, brake linings, and non-corrosive paints. Oh, and pencils. Dixon was a pencil pioneer. He taught a man named John Thoreau what he knew about making pencils. John was Henry David Thoreau's father. When John Thoreau's brother-in-law, Charles Dunbar, became half-owner in a graphite mine, the Thoreaus went into the pencil business.

New England graphite wasn't as pure as Borrowdale graphite. To make pencils out of this low-grade graphite, you ground it up and mixed it with glue, bayberry wax, and spermaceti3. The graphite rod thus formed was glued into a grooved piece of wood, and then a matching piece of wood was glued together with it, making a pencil.

The graphite filler in pencils varied a lot in quality: poor-quality pencils smudged and broke. Frustrated New Englanders tended to buy only pencils from abroad. Which is why Boston merchants suggested to John Thoreau that he use fake foreign labels on his Concord-made pencils. Concord might be a very patriotic place – after all, the Revolutionary War began right there – but Yankees were tight-fisted and preferred pencils that didn't crumble.

The Pencil: Henry David Thoreau's Role in Its Success

...I, who am going to be a pencil-maker to-morrow, can sympathize with god Apollo, who served King Admetus for a while on Earth4.
- Henry David Thoreau to Mrs Lucy Brown, 8 September, 1844.

Henry David Thoreau was not just a dreamer, his tendency to punning and free association notwithstanding. He was also an engineer and inventor, although he never made any money out of his inventions. He did, however, take on the issue of pencil improvement. While on a pencil-selling trip to Boston, Thoreau spent time in the Harvard library, researching graphite uses. After making some notes, Thoreau experimented with improved formulas for graphite mixtures. He still wasn't satisfied.

Thoreau next concentrated on finding a way to make the graphite particles finer. He invented a machine that ground the graphite more finely, and blew the finest particles upward using air currents, collecting them in a box above the grinding stones. The coarser particles were then reground.

Thoreau's unrealised dream was to make a seamless pencil. He wanted to find a way to bore a hole in the wood cylinder and pour in the graphite mixture. Alas, the technology eluded him.

The pencil seems to have been a familiar staple of Thoreau's life. He jotted notes and made sketches with pencils of Thoreau manufacture. He took them for granted: in a practical list of things to take on a woodland excursion, he remembered to say 'notebook', but forgot the pencil5! But as Thoreau well knew, the pencil was an indispensable writing tool in the American wilderness:

In the afternoon, the half-naked Indians performed a dance, at the request of the Governor, for our amusement and their own benefit; and then we took leave of them, and of the officials who had come to treat with them.
Excuse these pencil marks, but my inkstand is unscrewable...
- Henry David Thoreau to FB Sandborn, from Redwing, Minnesota, 26 June, 1861

Henry David Thoreau was an inspiration to many people: naturalists, Transcendentalists, self-sufficiency buffs, fellow Abolitionists6, and practitioners of civil disobedience. But he should also be remembered for his contribution to the science of pencil-making. After all, in the days before the iPad, it would have been hard to keep track of all these ground-breaking ideas without one.

1The remarkably rich graphite deposit was discovered in the mid-16th Century. The local farmers found this new material extremely useful – for marking sheep. The government found other uses for it, such as making crucibles for the manufacture of cannonballs. And pencils, of course.2Like trade embargos.3This is not a form of pasta. Spermaceti comes from inside the heads of sperm whales. And no, the sadness of making pencils from whales' heads does not escape us.4In Greek mythology, Apollo served as cowherd for King Admetus, one of the Argonauts. Whether the god marked the calves with graphite is not known.5This fact has been noted by more than one observant reader, but the one you really ought to read is biologist Dale DesLaurier's. His essay Delusions of Self-Sufficiency is an eye opener.6Thoreau penned the astonishing A Plea for Captain John Brown. To find out just how astonishing it is, you'll have to read it. John Brown led a violent attack on Harper's Ferry in October, 1859, leading to his death by hanging and subsequent fame in song. Thoreau compares him to Christ. Thoreau was nothing if not self-actualising in his opinions.