'Jeeves and the Wedding Bells' - a Novel by Sebastian Faulks Content from the guide to life, the universe and everything 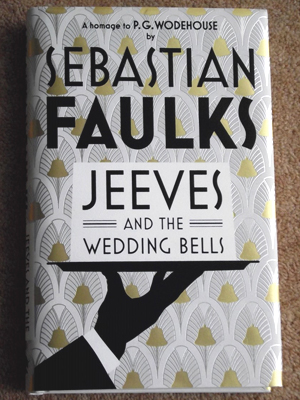 Given that Much Obliged, Jeeves, the penultimate work by PG Wodehouse featuring Jeeves and Wooster, ended with the reader assuming both characters would live happily ever after together1, it would be a bold move for a modern author to write a new Jeeves tale. Sebastian Faulks accepted the challenge and the 2013 novel Jeeves and the Wedding Bells was the result.

In many ways Faulks has captured the spirit of the original tales. The prose, while not quite up to Wodehouse's standard2, contains similarly amusing phrases and wit, giving readers new to the world of Wooster a good flavour of the originals. For those familiar with the stories, there are references to look out for, including name-checks for regular characters such as Gussie Fink-Nottle and the Glossops, who don't appear in person in the new book but are thought of by Wooster as he wends his way through the story. The convoluted plot is also strongly reminiscent of the original tales, as it includes aunt anxiety, tricky thefts and entangled engagements.

However, Faulks brings more realism into the story (for example, the First World War is mentioned) as well as a level of sentimentality (especially in the ending) that Wodehouse tended to avoid in his quest for humour. Perhaps because of these factors, the book was marketed mainly as 'Women's Fiction', and it doesn't appear to have troubled the bestseller lists too much.

PG Wodehouse was born in 1881 in Surrey, England. His parents were comfortably off, with aristocratic ancestry. They often left their children in the care of aunts and uncles as Wodehouse's father was a magistrate in Hong Kong, but the children went to school in England. He spent some time working for a bank, but took to writing in his spare time and soon became a prolific and successful novelist. He travelled widely - he was in New York when the First World War broke out, and it was there that he met and married Ethel Rowley, an English widow. He also spent time in Europe (including several years in Germany where he was imprisoned during the Second World War). He became a citizen of the USA in 1955. He had no children of his own, but he adopted Ethel's daughter Leonora. PG Wodehouse wrote hundreds of short stories, almost 100 novels and other works including autobiographical pieces. He died in New York in 1975 at the age of 93.

Sebastian Faulks was born in Berkshire, England, in 1953. From an early age he was keen to become a novelist, and his first book was published when he was 29. In 1979 he started working for newspapers and had various roles over the years including book reviewer, feature writer and literary editor. He married Veronica Youlten in 1989 and they have three children. He was successful enough to become a full time author after 1993. He has become known for writing historical fiction, but he was invited to write a new James Bond novel to commemorate what would have been Ian Fleming's 100th birthday in 2008. The novel, Devil May Care, became a bestseller and demonstrated that Faulks had a talent for writing in the style of another author. Hence he was approached to work with Wodehouse's well-known creations.

Bertram Wilberforce Wooster, alias Mr Wilberforce. Bertie was orphaned at a young age, leaving him in the care of his strong-willed aunts. His parents had been rich, so as an adult he is able to live on his inheritance and enjoy the finer things in life, including the services of his ever-resourceful 'gentleman's personal gentleman' Jeeves. In order to assist his friends and associates, he finds himself pretending to be Mr Wilberforce, the valet of Lord Etringham.

Reginald Jeeves, alias Lord Etringham. Jeeves is the valet or 'gentleman's personal gentleman' of Wooster, and always has a resourceful scheme to assist his employer, whether it be with hangover cures or plots to disentangle confused romances. Inadvertently introduced to Sir Henry Hackwood as Lord Etringham, he keeps up the pretence in order to help other guests at the stately home of Melbury Hall.

Sir Henry Hackwood is the owner of Melbury Hall, a stately home desperately in need of maintenance. He values the advice of his new friend Lord Etringham as he attempts to win more money by betting on horse racing. He hopes his daughter Amelia and his ward Georgiana will marry rich men who will help to pay for the renovations.

Georgiana Meadowes has been Sir Henry's ward since she was orphaned at a young age. She has been encouraged to get engaged to a well-off author, Rupert Venables, but she finds Bertie to be 'absurdly funny and thoughtful'.

Rupert Venables is an author known for his series of travelogues with titles such as 'By Pullman to Peking', or 'By Tramcar to Toledo'. He is rich thanks to his family's sausage casings firm being bought by the company behind Hickory Hot Boy relish.

Amelia Hackwood is Sir Henry's daughter. She has lived a sheltered life and enjoys collecting butterflies. She loves Woody Beeching, in spite of his inability to assist her father financially, but she breaks off the engagement when she suspects him of flirting with other women.

Peregrine 'Woody' Beeching is Bertie's friend. He is in love with Amelia, but Sir Henry disapproves of the match because, although Woody is of aristocratic stock, his family has no money. He is eager to rekindle the romance before Amelia finds someone else.

Mrs Tilman is the housekeeper at Melbury Hall, a young widow and kind soul who looks after Bertie while he is in the guise of Mr Wilberforce. She also helps Jeeves with his schemes. Mrs Padgett is the cook. She makes sure Bertie is well fed during his time as a valet.

As in Wodehouse's stories, the novel is written in the style of Bertie's memoirs. Bertie has recently returned from the Côte d'Azur where he spent time with Georgiana. He receives word that his fearsome Aunt Agatha wants to stay at his flat in London while her stately home is renovated, so he decides to decamp to a cottage near Melbury Hall, from where he can attempt to help his friend Woody with his engagement woes. The misunderstanding about Lord Etringham sees Bertie stealing Sir Henry's copy of Debretts' list of influential people, so nobody can find out who the real Lord Etringham is, and then taking a place in Melbury Hall as the valet to Jeeves' lord. Bertie's plans to reunite Woody and Amelia struggle as he is distracted by a cricket match, a performance of A Midsummer Night's Dream and Georgiana but in the end everyone finds a new way to live happily ever after.

While the novel will not be pleasing to all readers for its imitative style, it is readable in its own right. Plus, as Sebastian Faulks says in his foreword to the book:

I hope that readers of this story will be encouraged to go back to the peerless originals, and thence to a brighter world.'

1As Jeeves confirmed his loyalty to his employer by destroying incriminating information about Wooster's foibles.2Of course.