Tintern Abbey, Co Wexford, Ireland Content from the guide to life, the universe and everything 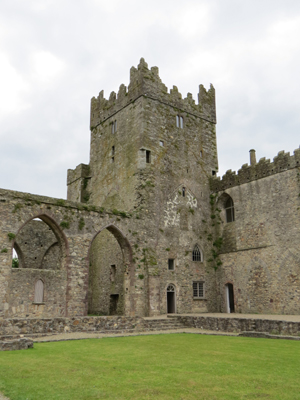 Tintern Abbey is a ruined monastery in south County Wexford, Ireland, close to the town of Wellingtonbridge. It and its grounds are open to the public and are a popular attraction for visitors as well a lovely place for walks for locals.

History of the Abbey

At the start of the 13th Century, William Marshall, Earl of Pembroke, was sailing to Ireland. He was a Norman, a member of the warrior class who had conquered England and Wales in the 11th Century and had just started their conquest of Ireland about 30 years before this fateful sea crossing.

The boat was caught in a storm. He prayed to God for help and vowed he would build a church if he survived the storm. His boat ran ashore safely in Bannow Bay, County Wexford. In thanksgiving, he made a large donation of money and land to the Cistercian monks of Tintern Abbey in Monmouthshire, Wales, and many of them came to Wexford and set up a monastery there in 1203. Confusingly, they named it Tintern Abbey, the same name as their original abbey in Wales. To distinguish between the two, the one in Wales was often called Tintern Major while the one in Wexford was Tintern de Voto (Tintern of the Vow).

The monastery had 9,000 acres of land and the monks lived a life of farming and prayer until the 16th Century, the time of Henry VIII. Henry had a fight with the Church and decided to close down all the monasteries throughout England, Wales and Ireland. The closures took place in the 1530s and 40s; Tintern in Wexford went the way of all monasteries.

Although officially in the care of Sir John Croft, the Lord Deputy of Ireland, nothing was done with the buildings or land for about 20 years. Locals used the abbey as a burial ground - a hundred people were buried there at this time. Then in 1562, Henry granted the abbey and land to a soldier, Anthony Colclough (pronounced 'Coke-Lee'), from Staffordshire. The Colcloughs lived in the abbey, converting parts of it into a fortified tower-house. The parts which were not used as a house gradually fell into disrepair and became ruins.

By the 18th Century, there was no longer any need for fortification, but it became fashionable to pretend you lived in a castle, even for those who actually did. Sir Vesey Colclough built a number of walls around the estate with mock battlements, and the impressive Abbey Bridge across the sluggish, tidal Tintern River.

The last of the family was Lucy Wilmot Maria Susanna Biddulph-Colclough (1890-1983), known as Marie. In 1959 she had to leave Tintern due to ill health. In 1963, she donated the abbey and the grounds to the nation. The Office of Public Works has looked after Tintern ever since. They are gradually converting the house back to what it was like as an abbey, restoring parts of the more ruinous bits and removing 19th- and 20th-Century additions. Most of the land was sold off but 100 acres have been kept as a suitable setting for the abbey.

Today, the area is a public amenity: