The Non-Culture Science Fiction of Iain M Banks Content from the guide to life, the universe and everything 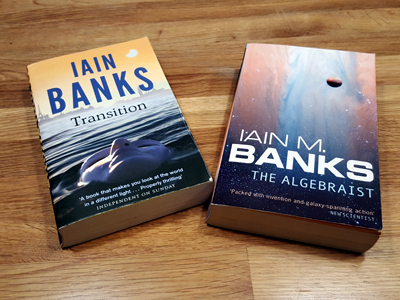 Iain Banks (1954-2013) was a Scottish writer. Throughout his career, he published science fiction under the name of Iain M Banks with a middle initial, while publishing mainstream fiction under the name of Iain Banks without the M. Most of Banks' science fiction was set in or around a galaxy-spanning civilisation called the 'Culture'. Only three of the books are not connected with the Culture. This entry is about the three non-Culture books and also the book Transition which is arguably science fiction.

Banks also published a collection of short stories under the title of The State of the Art. About three quarters of this was about the Culture, and of the rest, only some of it was science fiction, so it won't be discussed here.

Banks' works have been described as 'a return to the Golden Age of Science Fiction'. While the Culture novels tend to grapple with the big questions such as what happens when technology has advanced to the point where it can give us anything we want, the non-Culture stories are more varied and there is no underlying theme. They must be taken individually.

Almost all of Banks' books have a gruesome aspect to them. This applies both to his science fiction and non science fiction books. The eponymous 'wasp factory' of Banks' first published novel is a device for predicting the future by torturing and killing wasps, and this isn't even the most upsetting thing in the book by any means. Torture seems to be a recurring theme in many of his books: the character of the Archimandrite in The Algebraist delights in elaborate methods of torturing his enemies. Despite this, the Archimandrite is actually a comic figure. There's a less amusing torturer in Transition, one who is proud of the fact that he takes no pleasure from his work other than the knowledge of a job well done.

Brief Synopsis of the Books

Against a Dark Background is a light-hearted book. Banks said of it 'I remember way back thinking that Against a Dark Background is basically a fantasy novel – in fact a multiple quest novel – in a magic-free technocratic setting'. It is set on a planet which has had civilisation for a long, long time. There are the remains of previous civilisations dotted around the planet, left-over artefacts and traces of the wars which wiped them out. The current society has stagnated and is looking for some new approach to life. Various factions compete for control of whatever new order eventually takes command of the world.

Sharrow is a young woman who is the last remaining member of an aristocratic family. An order of military monks, the Huhsz, have a vendetta against her family, wanting to wipe it out for some obscure theological reason. They are willing to let her live if she will find a lost artefact - the last Lazy Gun. The Lazy Guns were the ultimate weapon of a previous civilisation. They kill with a sense of humour. Their principle of operation is completely unknown, but they appear to have vast powers which they use to kill the intended target in as funny, bizarre or embarrassing a manner as possible. For example, the target may be attacked by wild animals or an anchor may fall on them from the sky. There were eight guns made, but the other seven have all been destroyed - some of them by their own self-destruct mechanism which activates when anyone attempts to open the gun up to see how it works.

Sharrow is army trained. She calls together her disbanded army squadron to go on an adventure to find the missing Lazy Gun and to get it back to the monk leaders before the monk assassin squad catches up with her. Along the way she encounters many different groups, some friendly and some hostile, as well as a trail of clues that lead her to the prize.

This book is a great change from the Culture books. Firstly, there is no interstellar travel. It is possible to travel between the planets of the solar system, but not outside of it, so all the civilisations that have ever existed have been confined by the size of the planets. Secondly, there do not appear to be any advanced artificial intelligences. Sharrow does encounter a robot which is the equivalent of the drones of the Culture stories, but the super-intelligent Minds controlling everything are absent, so traditional and competing methods of ruling the planet are carried out by the human occupants.

This is a difficult book to read. It is narrated by four different narrators and one of these is only semi-literate. Much of the book is written in English which is spelled so badly that it is a real effort to decipher it. The name of the book is 'Fearsome Engine', but this becomes 'Feersum Endjinn' in the author's bad spelling. For example,

The story is set in the far future of Earth. The most important building in the world is a city in the shape of a giant tower, about 40 miles high. The top parts of this are inaccessible to the people living lower down, and there are legends that there are people living up there, but nobody has contacted them for centuries.

The world's Internet has reached a chaotic state where everything and everybody is connected to a giant virtual universe within the computer systems, but there are so many viruses in the system that nobody has control anymore and there is as much misinformation as genuine information in the system. This giant virtual world is known as the Cryptosphere or Crypt for short.

Bascule the Teller is a young man who is an expert at entering the Crypt, extracting true information while avoiding attacks from the various viruses which appear in the virtual world as actual creatures attacking him. Most of the story is told by him, but his mind has become damaged by his contact with the Crypt - it is he who is totally unable to spell and who narrates much of the book.

There are other strands to the story - a number of people are moving, some in the virtual Crypt, others in real life, and all of them are trying to get to the top of the tower. Meanwhile the Solar System is moving into a part of the galaxy which has a dense molecular cloud. This will dim the Sun with possibly disastrous effects for the Earth.

The Algebraist is the nearest thing to a Culture novel while being set in a totally different world. Like the Culture novels, there is space travel, a galaxy-spanning civilisation, humans who can modify themselves surgically for particular effects, and lots of different intelligent species living together. There are two main differences from the Culture books:

Fassin Taak, the protagonist of the story, lives on a moon of the gas giant Nasqueron, a planet similar to Jupiter. His job is studying the residents of Nasqueron, the Dwellers. These intelligent creatures live in most of the gas giant planets of the galaxy and reached the height of civilisation billions of years ago. Their civilisation collapsed and degenerated into a post-civilisation culture. This is a mixture of barbaric practices and left-over advanced technology operated by Dwellers who don't necessarily know how it works.

The Dwellers are irritating but likeable creatures - they are boastful and rough, but have access to a vast amount of information left over from when they were civilised, which is why they are being studied by humans. They are reputed to once have had a secret network of wormholes which they could use to move around the galaxy; it would be of great value to the military if they could find and use these wormholes. The secret of the whereabouts of the wormhole network is allegedly hidden within an algebraic function somewhere in the vast corpus of left-over knowledge of the Dwellers.

Meanwhile, a tyrant calling himself the Archimandrite is intent on taking over the galaxy and is lured to Nasqueron by the promise of unlimited, instantaneous travel.

Banks' book Transition is unusual. He chose to publish it under the name of Iain Banks along with his 'mainstream' fiction, although it is quite clearly in the realms of science fiction. His publishers in the US, on the other hand, decided to release it under the name of Iain M Banks, as his science fiction sold better there than his mainstream fiction. The book is in a different style from all his other science fiction - there are no space ships, intelligent computers or aliens. Instead, it is set in a universe where there are infinite parallel worlds, one of which is our own Earth. Certain people, known as 'transitionaries', have the ability to move between the parallel worlds. This is a topic that has been explored by many fantasy writers - Diana Wynne Jones in The Homeward Bounders, Howl's Moving Castle and The Lives of Christopher Chant; Stephen Baxter in The Time Ships and Roger Zelazny in the Amber books. Even Doctor Who has occasional forays into parallel worlds, such as for example 'Inferno' or the world of Lumic's Cybermen.

Banks' venture into the Many Worlds Universe is a masterpiece - the plot is a complex one, and like many of Banks' books, you'll have to pay attention. We gradually learn that a greater-than-global organisation called the 'Concern' is the real ruler of the world(s). Led by an elected Council, they start out with the good of the worlds at heart but gradually come to serve only their own perpetuation. Chief among them is Madame d'Ortolan, who is secretly planning to take over the Council and become sole ruler. The rebel Mrs Mulverhill is rumoured to be fighting against this.

Another thing that makes Transition different from Banks' other science fiction books is that there is rather a lot of sex. Both Madame d'Ortolan and Mrs Mulverhill try to seduce the skilled but rather bland transitionary, Temudjin Oh, to win him over to their side. D'Ortolan has invented the technique of using transitions between worlds to extend the duration of orgasms. Mulverhill, on the other hand, likes to talk during extended foreplay. Banks admitted that he included the sex scenes with Mrs Mulverhill because she had a lot of explaining to do, and this would be 'rather dry stuff, by itself'.

The story is told through a number of parallel narratives by or about different characters: Madame d'Ortolan herself, the agent Temudjin Oh, a torturer who calls himself the Philosopher, a patient in a hospital who is hiding from someone, an aspiring film director trying to sell his idea for the next big movie, and a self-centred young London financial trader called Adrian. What the connection between all these is, if there is one, is only gradually revealed.